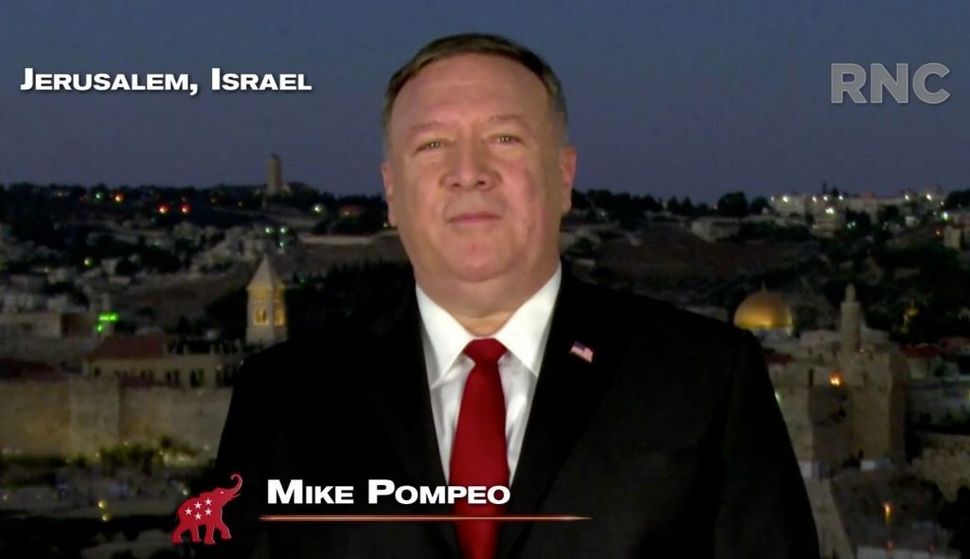 In this screenshot from the RNC’s livestream of the 2020 Republican National Convention, U.S. Secretary of State Mike Pompeo addresses the virtual convention in a pre-recorded video from Jerusalem, Israel, on August 25, 2020. Image by RNC via Getty Images

(JTA) — Secretary of State Mike Pompeo canceled plans to film a campaign ad in Israel to encourage Americans living there to vote for President Donald Trump.

The decision not to participate in the campaign by Republicans Overseas Israel followed the uproar over Pompeo’s prerecorded message from Jerusalem to last week’s Republican National Convention, and following legal consultations, Israel’s Channel 12 News reported, citing sources involved in the discussions.

Pompeo was accused of violating the Hatch Act, which forbids federal employees from participating in some kinds of political activity. His speech to the convention filmed atop the King David Hotel, with the Old City as a backdrop, triggered a congressional investigation.

Pompeo was in Israel last week following the announcement of a U.S.-brokered normalization agreement between Israel and the United Arab Emirates.

The post Pompeo cancels plan to film Trump campaign ad geared to US expats while in Israel appeared first on Jewish Telegraphic Agency.