Announcement of speaking engagement with Leila Khaled Image by Twitter

San Francisco State University President Lynn Mahoney is standing behind the decision to allow a Palestinian terrorist to participate in a university event via Zoom.

A university official told the Forward that an e-mail in support of Leila Khaled speaking at a university event did in fact come from Mahoney.

In the e-mail, Mahoney wrote that “an invitation to a public figure to speak to a class should not be construed as an endorsement of point of view.”

“Higher education and the college experience are an opportunity to hear divergent ideas, viewpoints and accounts of life experiences” she continued. “An important outcome of the college experience is to learn to think critically and come to independent, personal conclusions about events of local and global importance,” continued Mahoney. “A university is a marketplace of ideas, and San Francisco State University supports the rights of all individuals to express their viewpoints and other speech protected by law, even when those viewpoints may be controversial.” 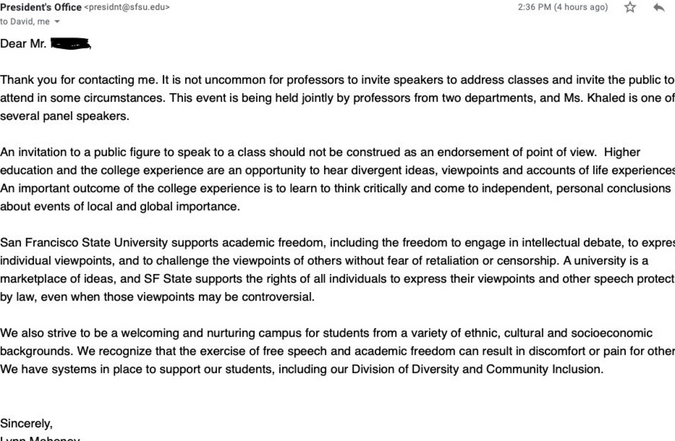 The Arab and Muslim Ethnicities Diaspora (AMED) at SFSU announced it is hosting Leila Khaled, a member of the Popular Front for the Liberation of Palestine terrorist group, who hijacked an Israel-bound plane in 1969 and the following year was arrested after failing to hijack an El Al flight. She was eventually released in a prisoner-for-hostage exchange.

This is not the California State University system’s first Khaled controversy. In May The Forward reported that the Women’s Resource Center at San Diego State University apologized for including a photo of Khaled in its weekly newsletter. 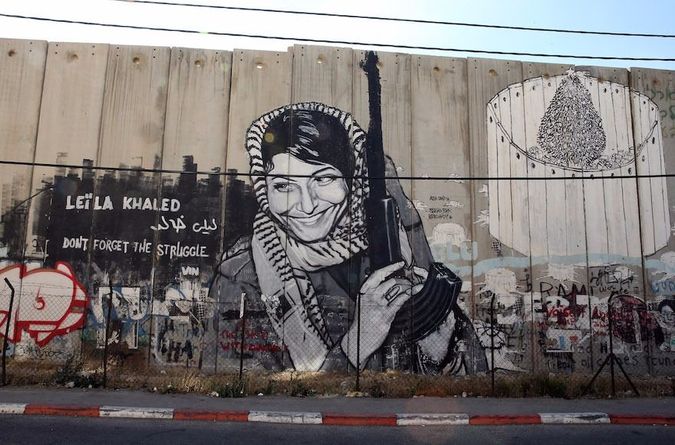 The photo featured Khaled holding a gun with the caption, “From the river to the sea, Palestine will be free.” It was featured alongside other photo.

“Is this supposed to be an acceptable free speech at your university?” StandWithUs founder Roz Rothstein tweeted to SFSU. “An address by Leila Khaled, someone who is affiliated with terrorism.”

The AMCHA Initiative, a Jewish campus education group, called for opponents of the decision to demand SFSU change its policy regarding permitted speakers.

“Help call on Cal State to institute safeguards against promoting anti-Zionist political advocacy, such as BDS in classrooms” the group tweeted. “Why is this necessary?”

But on social media, it wasn’t only Jewish organizations protesting a university-sanctioned appearance by Khaled who is 76.

“I was on El Al flight 219 that she hijacked in 1970,” wrote Twitter user Rodney Khazzam. “I’m an American born and raised. Shocked we are giving her the honor.”

This article was updated Sept. 4 to include SFSU’s response.