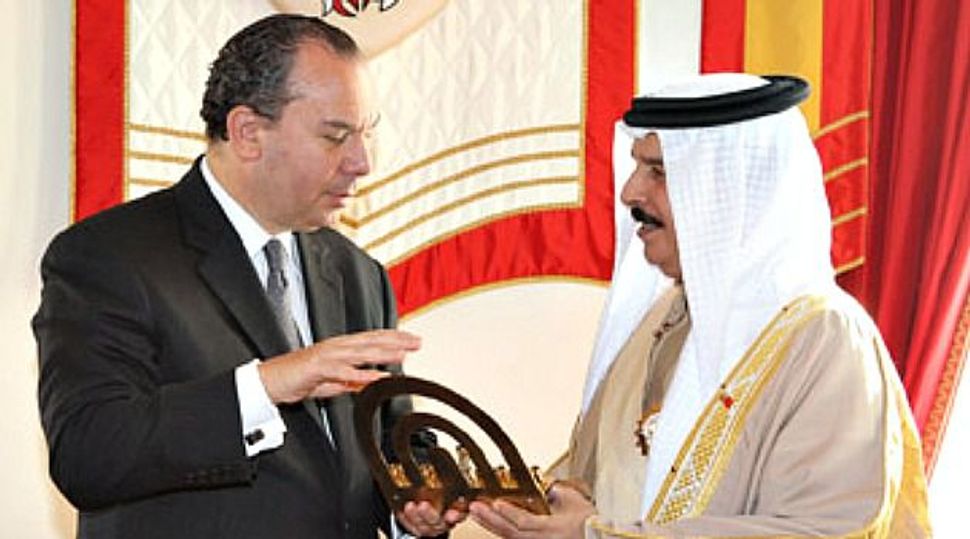 Crackdown King: Rabbi Marc Schneier meets Bahrain?s King Hamad bin Isa Al Khalifa. The Gulf State?s ruler has been criticized for cracking down on opponents but Schneier praises him as a model of interfaith dialogue.

WASHINGTON (JTA) — Bahrain will be joining the United Arab Emirates in normalizing ties with Israel at a White House ceremony next week, President Donald Trump said on Twitter Friday.

“Another HISTORIC breakthrough today! Our two GREAT friends Israel and the Kingdom of Bahrain agree to a Peace Deal – the second Arab country to make peace with Israel in 30 days!” Trump said Friday on Twitter.

He attached to another tweet a joint statement of the United States, Bahrain and Israel.

Bahrain and to a lesser extent the UAE have had informal relations with Israel for years. Bahrain last year hosted a summit unveiling the economic portion of the Trump administration’s Israeli-Palestinian peace proposal and allowed Israeli journalists to cover the event.

But official normalization of ties is a significant step forward for Israel’s ambition for peace with its Middle Eastern neighbors, and for the Trump administration’s Middle East policy.

The statement pledged that the parties would continue to seek a “just, comprehensive and enduring resolution to the Israeli-Palestinian conflict.”