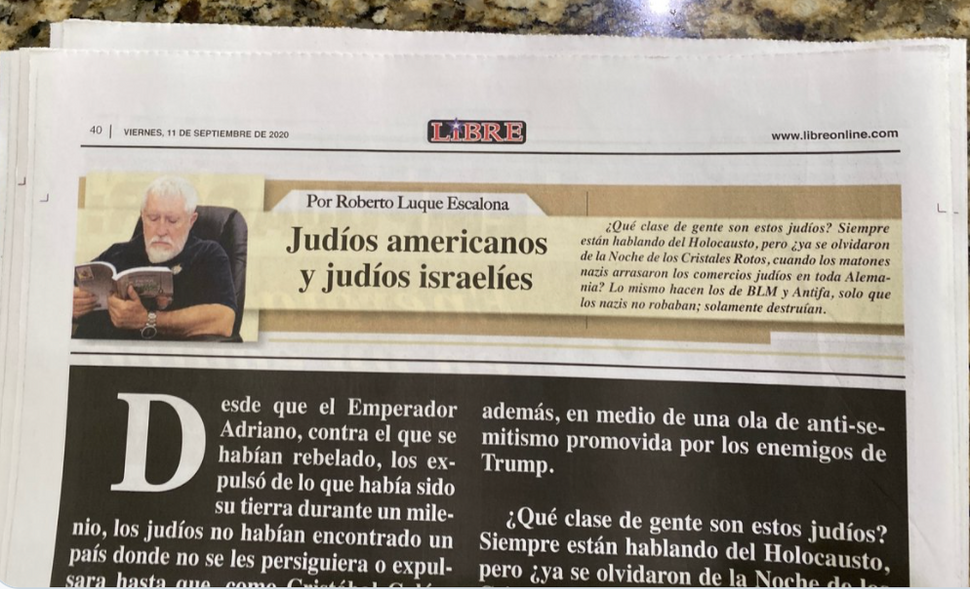 (JTA) — The Miami Herald has apologized for running anti-Semitic and racist ads in its Spanish-language publication el Nuevo Herald for months.

A column in a paid insert titled “Libre” in the Friday edition said Jews support “thieves and arsonists” and compared the Black Lives Matter movement to the Nazis.

“What kind of people are these Jews?” Roberto Luque Escalona wrote in the column. “They’re always talking about the Holocaust, but have they already forgotten Kristallnacht, when Nazi thugs rampaged through Jewish shops all over Germany? So do the BLM and antifa, only the Nazis didn’t steal; they only destroyed.”

On Monday, the Herald apologized in a statement and said that upon review, the paper found that the insert had included “multiple instances of anti-Semitic and racist commentary since January.”

“The fact that no one in leadership, beginning with us, had previously read this advertising insert until this issue was surfaced by a reader is distressing,” the statement said. “It is one of a series of internal failures that we are investigating in order to prevent this from ever recurring.”

The statement did not address criticism over why the Herald had allowed the insert’s publisher, Demetrio Perez Jr., to advertise in its pages. Perez pleaded guilty and was sentenced in 2001 to house arrest and probation for defrauding elderly tenants in low-income housing that he owned.

The publication of the insert was referenced in a Monday article in Politico saying that Latinos in Florida were being flooded with anti-Semitic messages, including those affiliated with the QAnon conspiracy theory.