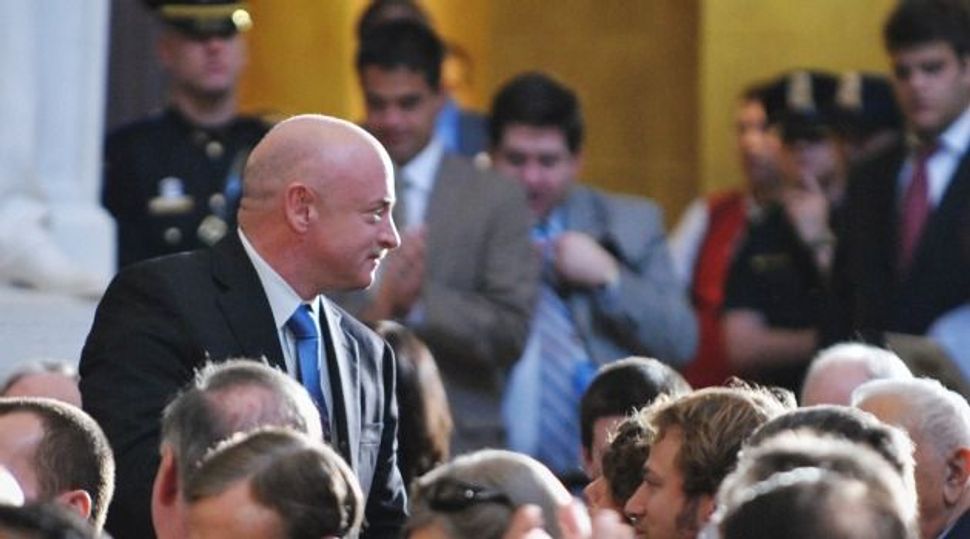 Husband?s Hurt: Astronaut Mark Kelly blasted House Speaker John Boehner for failing to see Congresswoman Gabrielle Giffords in the hospital after she was nearly killed in a mass shooting in January. Image by getty images

A special senate race to fill the late Republican Sen. John McCain’s seat in Arizona could be the tipping point in the fight over confirming a Supreme Court Justice to replace Justice Ruth Bader Ginsburg.

Democrat Mark Kelly, the former astronaut and husband of ex-Rep Gabby Giffords, who is Jewish, is likely to win a race against Republican Sen. Martha McSally and could get sworn in early, according to state law. That would shrink the Republican Senate majority, slashing the number of necessary GOP defectors from four to three to block a Supreme Court appointment.

Susan Collins of Maine and Lisa Murkowski of Alaska have already indicated they would decline to tow the party line, and Mitt Romney of Utah might.

The Arizona election is on November 3, but a Superior Court of Arizona ruling on a similar case said that a special election winner “is entitled to take office once the election process is concluded.”

The Senate Republicans hold a 53-to-47 majority, and Majority Leader Mitch McConnell has promised that “President Trump’s nominee will receive a vote on the floor of the United States Senate.”

This position lies in stark contrast to his blocking of President Barack Obama’s nominee, Merrick Garland to replace Justice Antonin Scalia. in that case, he stalled, offering the explanation that “The American people should have a voice in the selection of their next Supreme Court Justice.”

Mark Kelly served as a naval aviator and joined NASA in 1996, piloting space shuttles until 2011. His wife was nearly killed in an assassination attempt in 2011 and the two founded a nonprofit that advocates for gun control.