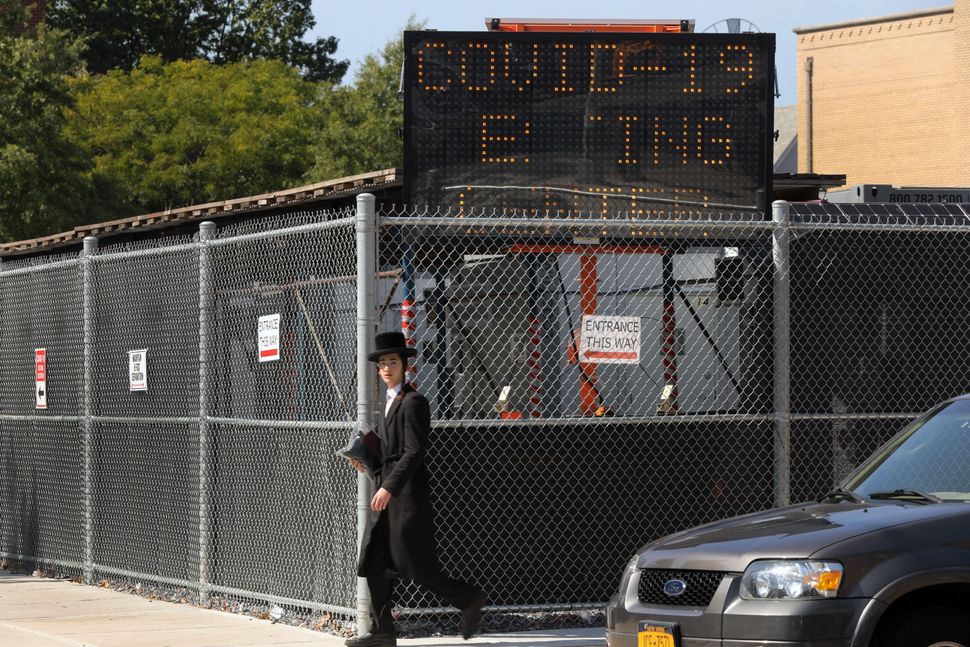 A Hasidic resident in Borough Park, Brooklyn. Image by Getty

The high test rate portends a shutdown of the city’s nascent public school reopening plan and likely the return of other lockdown measures. As recently as last Monday, the one-day positive test rate for the city was 1.93%.

“That is cause for real concern,” the mayor said.

De Blasio has said the city will shut down public schools if the seven-day positive test average went above three percent; on Tuesday he said it currently at 1.38 percent.

Eight of those areas include predominantly Hasidic neighborhoods and neighborhoods with large Orthodox Jewish communities in Rockland and Orange counties, as well as in Brooklyn and Queens.

Cuomo announced the test positivity rates days after New York City health officials threatened Hasidic neighborhoods with school and synagogue closures if positive test rates did not decline. The city has said it will shut down gatherings of 10 or more people if there were no improvements in the positive test rate, though no shutdown actions have been taken yet.

Cuomo, however, did not single out the Hasidic community, or any group, as behind the heightened positivity rates. He noted that there were also clusters of cases around Binghamton, related to a nursing home.

“Whatever the population, the answer’s going to be the same — it’s compliance,” he said. “The key to these clusters is to jump on them quickly, attack them from all sides, get the testing so you can do contact tracing and you can isolate.”

Cuomo announced Monday that the state was making 200 rapid COVID-19 testing machines available to the highlighted zip codes, and urged private schools in those areas to request the machines.

On Sunday, ahead of the beginning of the Yom Kippur fast, Hasidic communities in New York City were filled with paper signs, robo calls and even cars with loudspeakers announcing that residents should adhere to coronavirus guidelines because the community is “being watched,” JTA reported.

Orange County: 10950, 22%. This zip code includes the suburbs of Monroe and South Booming Grove, as well as the Hasidic town of Kiryas Joel.