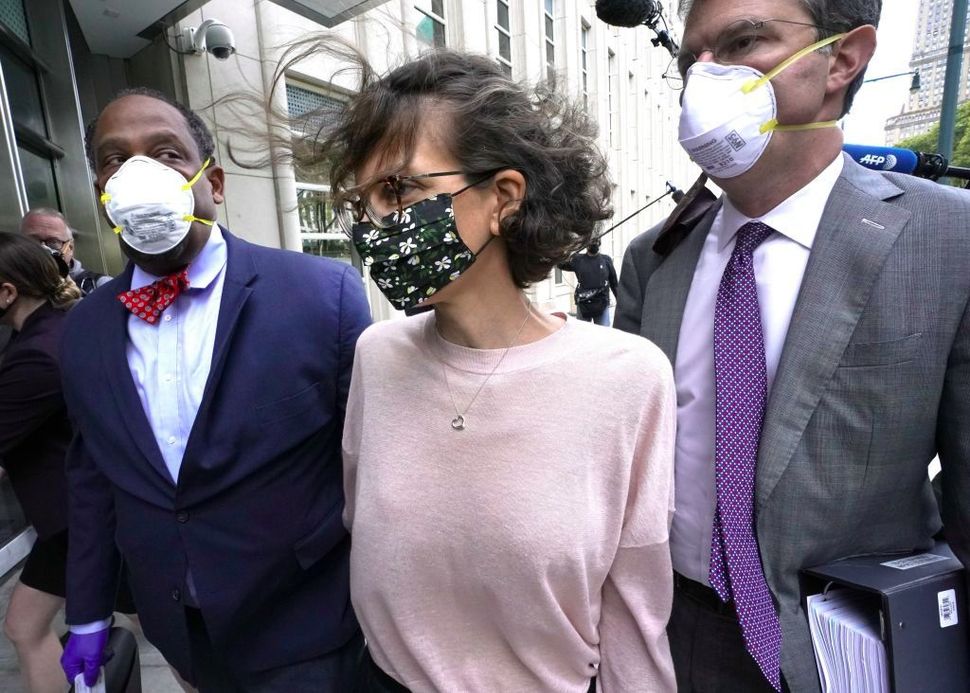 Bronfman, center, arrived at her sentencing on September 30. Image by Getty Image

Clare Bronfman, an heiress to the Seagram’s liquor fortune, was sentenced to six years and nine months in prison for her involvement in NXIVM, a self-described self-improvement group widely considered a cult.

Bronfman pled guilty in 2019 to two counts: fraudulent use of identification and conspiring to conceal and harbor an undocumented immigrant for financial gain. The sentence was even longer than prosecutors had requested. In his ruling, Judge Nicholas Garaufis, of the Federal District Court in Brooklyn, cited the key role she played in enabling the organization.

“I don’t know how many other multimillionaires are out there, ready to devote the limitless resources at their disposal to supporting pyramid schemes run by dangerous criminals,” he said.

Under the leadership of its founder, Keith Raniere, NXIVM offered pricey self-empowerment classes. Attendees included media and corporate executives and celebrities including Alison Mack, known for her role in “Smallville.”

However, a 2017 New York Times investigation revealed that Raniere had recruited female NXIVM members into a subgroup with the purpose of grooming them to be his sexual partners. Members of the subgroup were coerced into providing incriminating information, like nude photos. In a secret ritual, many were branded with Raniere’s initials while saying, “Master, please brand me, it would be an honor.”

Bronfman became involved in 2003 with NXIVM, which she said helped her overcome debilitating social anxiety. She said she was unaware of the secret subgroup, but as a member of NXIVM’s executive board she was involved in other illegal activities. Prosecutors said Bronfman falsified documents to bring NXIVM’s recruits to the United States illegally.

She also used her fortune to pursue critics of the organization, hiring private investigators to gather information on perceived “enemies,” including Senate Minority Leader Chuck Schumer.

Prosecutors said that Bronfman spent $116 million of her fortune on NXIVM.

At the sentencing hearing, several victims spoke of the destructive toll of Bronfman’s lawsuits. Raniere’s former girlfriend, Barbara Bouchey, said that Bronfan had pursued litigation against her even in the last few weeks.

Bronfman has refused to denounce Raniere, who was convicted in 2019 of racketeering and sex trafficking. Prior to her sentencing Bronfman wrote to Judge Garaufis that “NXIVM and Keith greatly changed my life for the better.”

At the hearing, Bronfman spoke briefly to the court. “I’m immensely grateful and privileged because all over the world, people are praying for me because they know my goodness,” she said. “It doesn’t mean I haven’t made mistakes.”