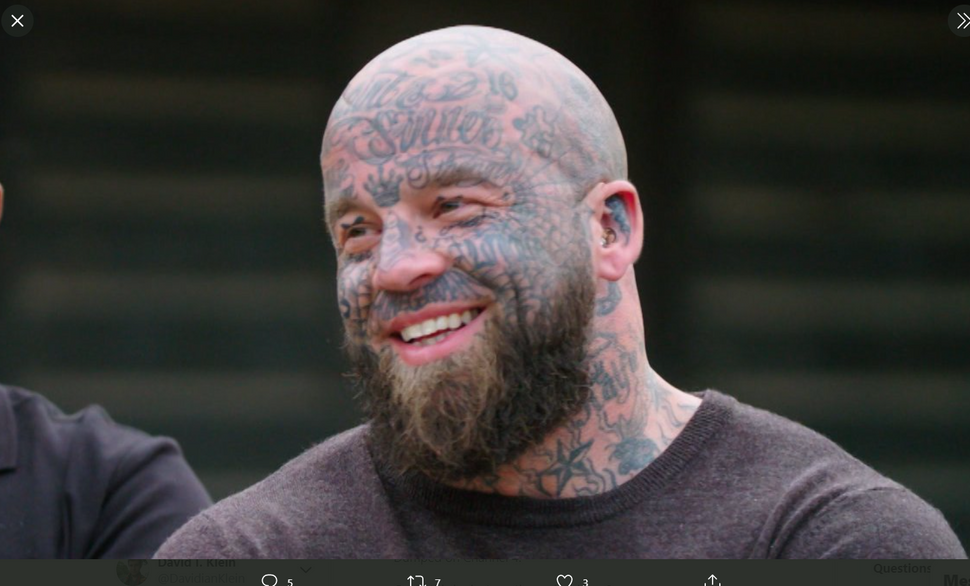 The U.K.’s Sky network suspended its game show, “The Chop: Britain’s Top Woodworker,” pending an investigation, after viewers recognized several Neo-Nazi and white supremacist tattoos on the face of one its contestants in a promotional video.

WHAT THE FUCK, @HISTORYUK? I can see at least 5 recognised Nazi/white power tattoos on this guy’s face. Get him off the fucking TV right now. #antiracism https://t.co/cmEeWJY2Xb

Darren Lumsden, a wood joiner from Bristol, was set to appear this week on the Great British Baking Show-styled carpentry competition, until viewers pointed out that among his many tattoos were a sig rune, which were used as part of SS’s emblem, and the numbers 14, 88, 23 and 16. All are coded white supremacist symbols, according to the ADL.

The number 88 is a representation of the initials of the Nazi salute “Heil Hitler,” while 23 and 16 spell out the initials of the phrase “white power.” The number 14 stands for the 14 words of the white supremacist slogan “We must secure the existence of our people and a future for white children.” All are commonly used in white supremacist circles.

In a now-deleted tweet, they said that the tattoos “hold no political or ideological meaning whatsoever,” and that the number 88 signified the year 1988, the supposed date of his father’s death.

Anyway, here’s the original tweet they wrote to me that prompted this, before they deleted everything. “No political or ideological meaning whatsoever.” pic.twitter.com/ztzQFtUNhx

Except Lumsden’s father is still very much alive.

“I’m here aren’t I? I’m alive and kicking” Trevor Lumsden, Darren’s father said, when reporters from the Daily Mail showed up at his home in Bristol. Trevor Lumsden said that he had not seen his son for “some years.”

Since the revelation, Sky deleted the tweets defending Lumsden and removed the promo for the episode featuring him.

“While we investigate the nature, and meaning, of Darren’s tattoos, we have removed the video featuring him from our social media pages, and will not be broadcasting any episodes of The Chop: Britain’s Top Woodworker until we have concluded that investigation,” says a statement on the show’s site.