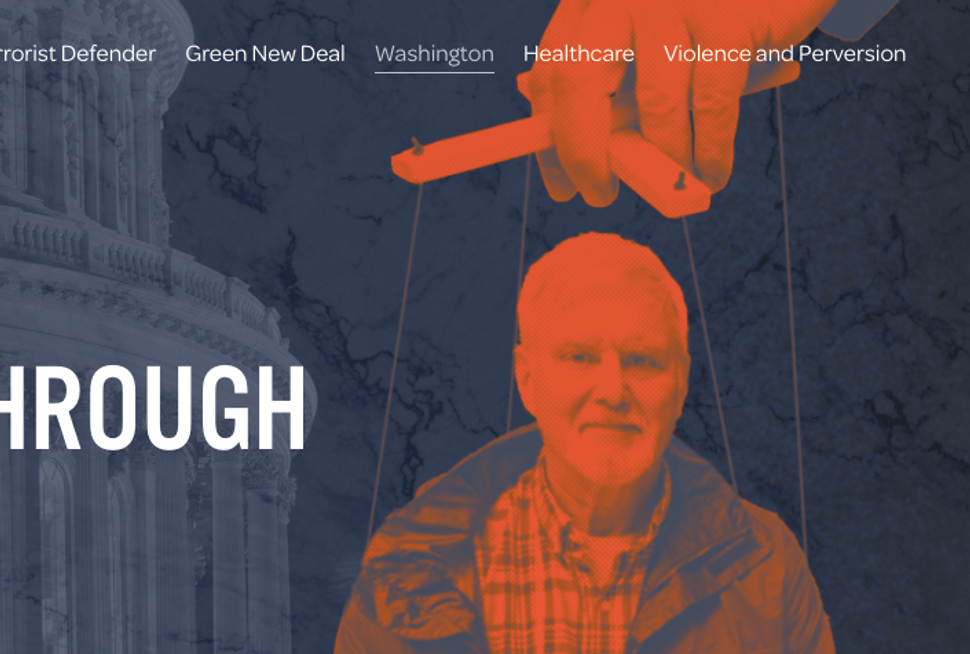 An edited photo from a campaign attack website shows Jewish candidate for U.S. House Moe Davis as a marionette puppet.

Republican Madison Cawthorn, who is running for a North Carolina House seat, put up an attack website this week accusing his Jewish opponent Moe Davis of being backed by a supporter who “aims to ruin white males running for office.”

Both Cawthorn and Davis are white men, but the website claims that a journalist named Tom Fielder, who has written favorably about Davis, “quit his academia job in Boston to work for non-white males, like Cory Booker, who aims to ruin white males running for office.”

The smear was first reported by The Bulwark.

The web page in question is part of MoeTaxes.com, which is sponsored by the Cawthorn campaign, and has since been edited. It now claims that Fielder is simply “an unapologetic defender of left-wing identity politics.”

The page also features an edited photo of Davis as a marionette puppet.

“Revelations about Madison Cawthorn’s blatantly racist comment come days after over 150 former classmates at Patrick Henry College — more than half the entire student body during his time there — signed a letter and posted it online calling Mr. Cawthorn a ‘sexual predator’ who lied and vandalized property while attending the college for a little over a semester in 2016-17,” Davis said in a statement to The New York Times.

Cawthorn told The Times that the page’s original language was poorly worded.

“The syntax of our language was unclear and unfairly implied I was criticizing Cory Booker,” Cawthorn said. “I have condemned racism and identity politics throughout my campaign including during my convention speech when I highlighted [Martin Luther King Jr.’s] vision for equality.”

Cawthorn previously drew the ire of Jewish voters in his district after he shared photos from a visit to Adolf Hitler’s vacation home. In a caption on the photo, which was shared on social media, Cawthorn referred to Hitler as “the Fuhrer” and said the trip had been on his “bucket list.” It also called Hitler a “supreme evil.”