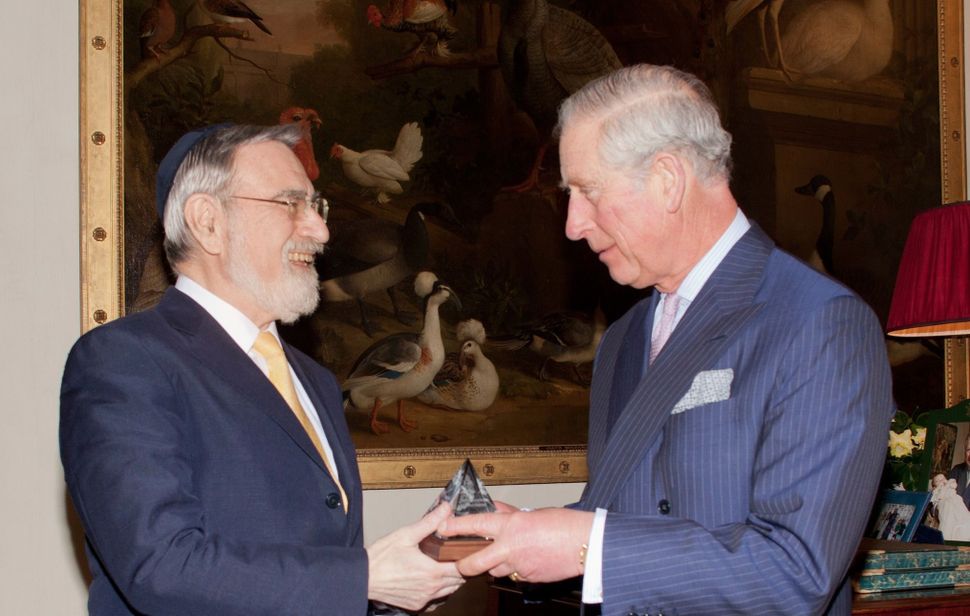 (JTA) — Prince Charles of the United Kingdom called former British Chief Rabbi Jonathan Sacks a “light unto this nation” at a tribute marking the end of Judaism’s 30 days of mourning since Sacks’ death.

Charles, whose title is the Prince of Wales, eulogized Sacks, who died at 72 on Nov. 7, on a prerecorded video broadcast Sunday that was viewed by thousands of spectators from around the world. The ceremony also featured speeches also by Israeli President Reuven Rivlin, former British Prime Minister Tony Blair and Lord Jacob Rothschild.

“Through his writings, sermons and broadcasts, Rabbi Sacks touched the lives of countless people with his unfailing wisdom, with his profound sanity and with a moral conviction which, in a confused and confusing world, was all too rare,” Charles said.

Sacks was a frequent contributor to British media and highly regarded across the English-speaking world and beyond. In the Jewish world, he was celebrated both for his rabbinical writings and interpretations and for his ability to teach non-Jewish audiences both the past and present of Judaism and Israel in relatable terms.

“Rightfully, so much Kavod came to him and through him to all of us,” said British Chief Rabbi Ephraim Mirvis, who succeeded Sacks in 2013. “Thanks to him, we’re all able now to stand tall.”

Rabbi Ari Berman, the president of Yeshiva University, said that Sacks impressed upon him “that today there’s a dual mission for our people: to protect and to project.”

Berman added, “Lord Sacks showed us what we may become. And for that, we remain forever inspired and forever grateful.”

Sacks’ widow, Elaine, said that over the past 30 days — a mourning period known as sheloshim — she had found herself wanting to share the outpouring of love and sorrow that she has received with her husband.

“I want to walk up the stairs to his study and see him sitting there writing away,” she said. “‘Listen,’ I will say. ‘Look what is happening. Look how many people have learned from you, revere you, love you. They are writing such moving things about you. Look what you have achieved.’ He will look up at me deeply and nod and say, ‘There is still so much to do, and he will get straight back to work.’”