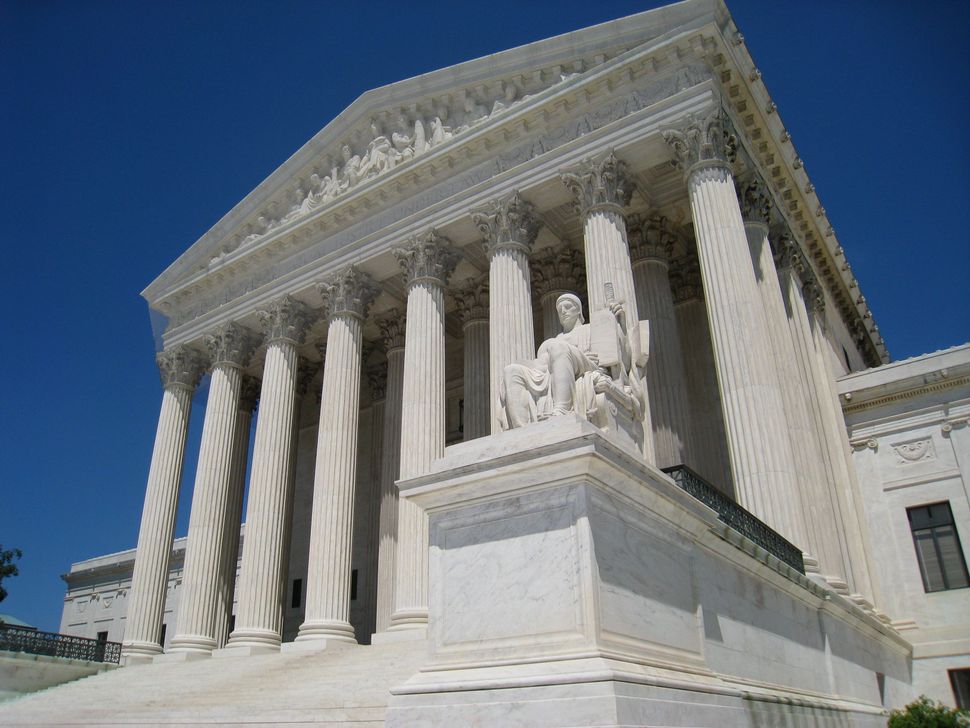 (JTA) — The Trump administration’s claim that Holocaust restitution cases should be heard in the countries where the crimes occurred, and not in the United States, met with skepticism on Monday in the Supreme Court — from conservative and liberal justices.

In the two cases, Holocaust survivors and the heirs of victims of the Holocaust are seeking restitution in U.S. courts for thefts incurred during the genocide.

The Trump administration is supporting the defendants, the governments of Germany and Hungary. They claim that the Foreign Sovereignty Immunities Act protects foreign governments from having to defend claims in U.S. courts.

The plaintiffs contend that an exception to the act holds that claims regarding property taken in violation of international law may be pursued in U.S. courts.

The plaintiffs are Hungarian survivors who were deported to death camps and whose property was appropriated by the Hungarian collaborationist government, and the descendants of German Jewish art dealers who say that Nazi German authorities coerced their ancestors into selling their collections to the state at less than market value.

The cases are known respectively as the Republic of Hungary v. Simon and Federal Republic of Germany v. Philipp.

Benjamin Snyder, the solicitor general, endured tough questions from a range of judges.

Chief Justice John Roberts, a conservative who sometimes votes with liberals, and Justice Elena Kagan, a Jewish liberal, seemed taken aback when Snyder said he was not in a position to assess what if any damage allowing the lawsuits to proceed would inflict on U.S. foreign policy.

“Why hasn’t the government told the courts what the foreign relations impact on the United States is?” Roberts asked.

Justice Neil Gorsuch, a conservative appointed to the high court by Trump, asked why descendants of German Jews should be forced to seek remedies in Germany in the first place.

“If Jewish victims of the Holocaust were deemed noncitizens, stripped of their citizenship, at least in Germany, why should they then have to go exhaust remedies elsewhere” than the United States? Gorsuch wondered.

The justices’ questions to the plaintiffs focused on whether such lawsuits could potentially upend internal efforts by foreign countries to come to terms with injustice. Justice Stephen Breyer, who is Jewish, posed a hypothetical situation using apartheid in South Africa.

In the Hungarian case, the plaintiffs in seeking U.S. courts as an appropriate venue cite what they say is Hungary’s failure to live up to restitution agreements and the trauma that Holocaust survivors would experience were they to return to Hungary to pursue their claims.

The plaintiffs in the German case are seeking redress in U.S. courts because the German Ad­vi­so­ry Com­mis­sion on the re­turn of cul­tur­al prop­er­ty seized as a re­sult of Nazi per­se­cu­tion has ruled that the sales were not coerced.