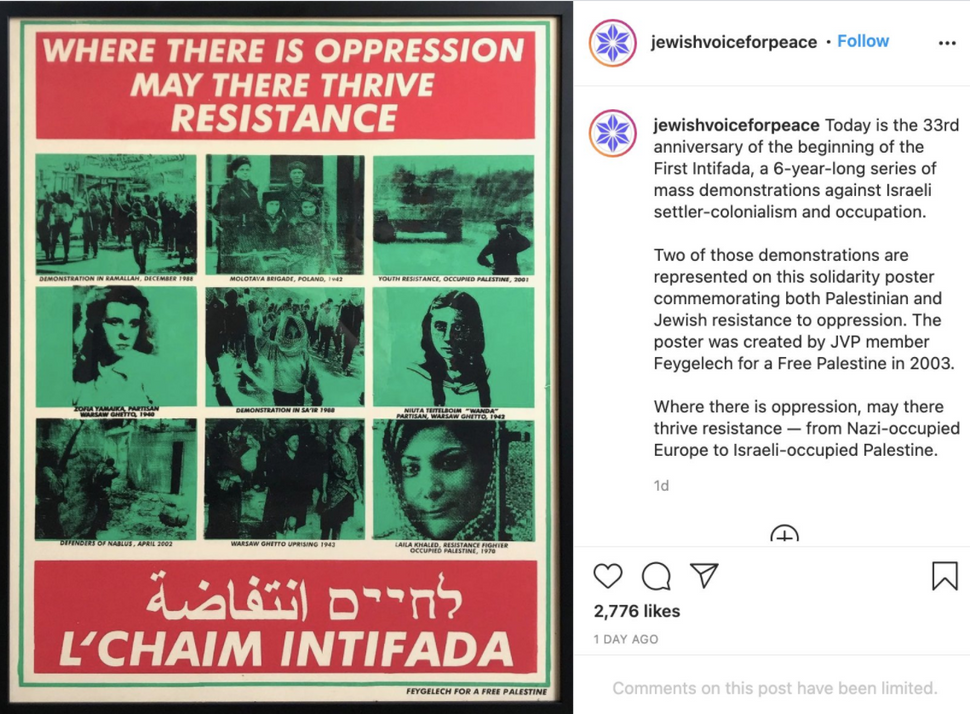 The Jewish pro-Palestinian group Jewish Voice for Peace (JVP) sparked controversy Tuesday after it tweeted out a poster with the phrase “L’chaim intifada” on it.

The tweet, which was quickly deleted, was in honor of the 33rd anniversary of the First Intifada, a Palestinian uprising which was defined by a series of mass protests and riots in the West Bank and Gaza Strip. The Intifada began on December 8, 1987, and ended nearly six years later with the signing of the Oslo Accords in 1993.

Overall, 277 Israelis, including 175 civilians, and nearly 2,000 Palestinians, died as a result of the uprising.

It set the stage for the Second Intifada, which lasted from 2000 to 2005 and saw far more violence and attacks on civilians than the first. In five years, over 1,000 Israelis and more than 3,000 Palestinians died. The poster featured in the tweet was originally made by JVP in 2003, in the midst of the Second Intifada.

“Where there is oppression, may there thrive resistance” the poster reads before concluding “L’chaim Intifada” in Hebrew, Arabic and then English.

Many quickly questioned the decision to use the traditionally Jewish term for making a toast, meaning “to life,” for an event that resulted in so much death.

277 Israelis were murdered during the first intifada.

Today, the repulsive “Jewish Voice for Peace” is celebrating every one of those deaths. pic.twitter.com/AbbmUIa6u3

The Orwellian-named “Jewish Voice for Peace” has issued a tweet celebrating the Palestinian campaign of violence known as the First Intifada.

277 Israelis, mostly civilians, were murdered during the First Intifada.

What do you call a group that celebrates the deaths of Jews? pic.twitter.com/EprwAxBDNG

Others criticized the poster’s implicit comparison of the violent Palestinian uprising against Israel to the Jewish partisans who fought Nazi forces in occupied Poland.

This utterly repulsive antisemitic tweet from JVP will shock you.

In it they compare the al-Aqsa Martyrs Brigade terror group and Laila Khaled (a terrorist who hijacked a plane) to Jews who resisted the Nazi genocide.

This is disgusting, even by their standard. https://t.co/Z8jeiAoLZg