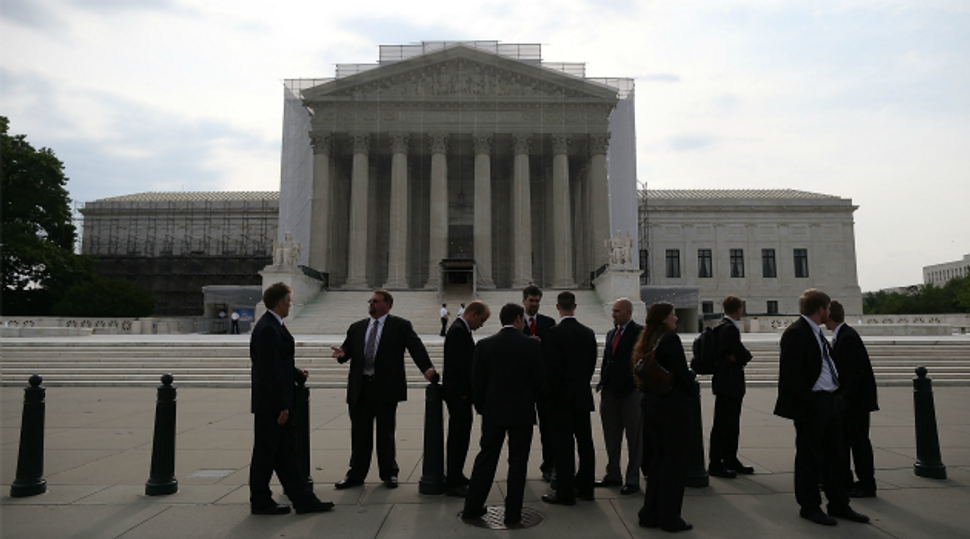 (JTA) — For the second time in three weeks, the U.S. Supreme Court indicated that state governments may not restrict religious gatherings more strictly than secular ones due to the pandemic.

Responding to an appeal by a New Jersey priest and an Orthodox rabbi, the high court in a unanimous opinion instructed an appellate court to review their claim that the rules laid down by Gov. Phil Murphy on limiting religious gatherings to 150 people or 25% of a room’s capacity, whichever number is lower, constituted religious discrimination. The court ordered a similar challenge to the restrictions in Colorado.

The order comes just weeks after the court blocked restrictions by New York Gov. Andrew Cuomo on religious gatherings in the state’s red zones — areas with rising COVID cases. In that case, brought by the Catholic Church’s Brooklyn Diocese and the Orthodox Jewish umbrella group Agudath Israel and decided by the court’s new conservative majority, the court ruled that New York’s pandemic restrictions could not be stricter for religious institutions than for secular ones.

“It is time — past time — to make plain that, while the pandemic poses many grave challenges, there is no world in which the Constitution tolerates color-coded executive edicts that reopen liquor stores and bike shops but shutter churches, synagogues and mosques,” Justice Neil Gorsuch wrote in a concurring opinion in that case.

No reason was given for the New Jersey ruling, but it was ordered to be reevaluated “in light of Roman Catholic Diocese of Brooklyn v. Cuomo.”

The rabbi in the New Jersey case was Yisrael Knopfler of Lakewood, who was arrested in May and charged with holding a gathering in violation of the governor’s orders as well as resisting arrest.