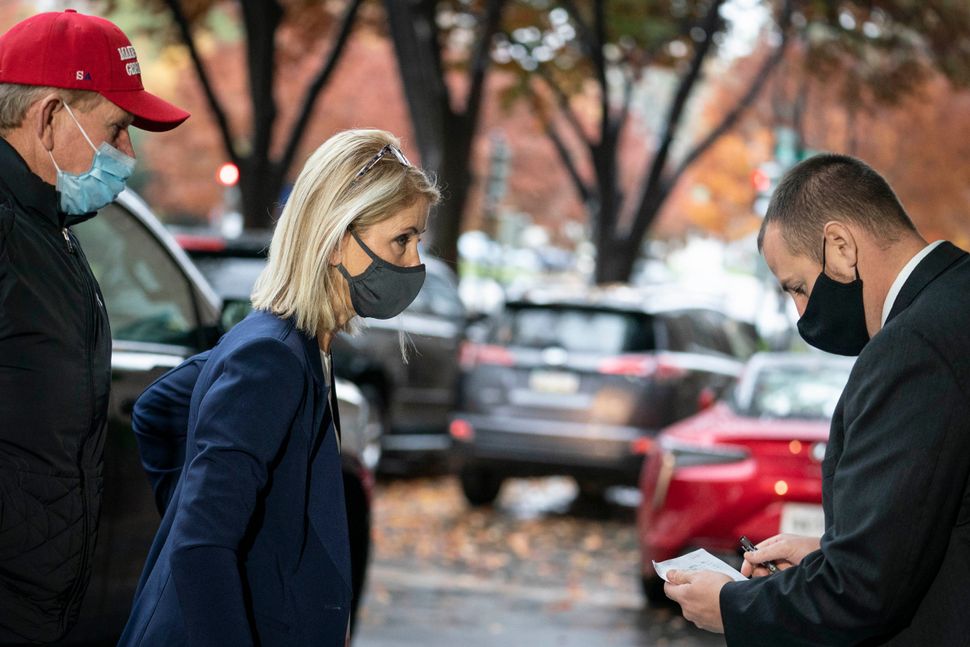 Rep. Mary Miller, R-IL, arrives to the Hyatt Regency hotel on Capitol Hill after her election in November. Image by Getty Images

Rep. Mary Miller, R-IL, released a belated apology Friday for telling a crowd of Trump supporters that “Hitler was right on one thing” before demonstrators stormed the U.S. Capitol this week.

Miller, who was elected in November, made the comments on Wednesday morning outside the Capitol. Later that day, hundreds of protesters broke through federal police lines to enter and vandalize the seat of government. Five people died in the violence, including one police officer.

“If we win a few elections we’re still going to be losing unless we win the heats and minds of the next generation,” Miller said at the event. “Hitler was right about one thing: he said whoever has the youth has the future.”

Not a great look for a freshmen Congresswoman to be caught on tape at a rally in the Nation’s Capitol saying “Hitler was right.” @Miller_Congress

And for those who want to nitpick what she said, let me just stop you right there—Hitler was right on literally nothing. pic.twitter.com/KXbVT8jTr3

Miller, who represents a sprawling rural district in southeast Illinois, appeared to be reading from prepared remarks. The comments drew swift condemnation from Jewish groups and Illinois Democrats.

In a statement late Friday morning she said Adolph Hitler was “one of the most evil dictators in history” and said she was seeking to make the point that liberals were attempting to indoctrinate young Americans, just as Hitler had done with young Germans.

“I sincerely apologize for any harm my words caused,” Miller said, adding that she regretted referencing the Nazi leader.

“I’m passionately pro-Israel and I will always be a strong advocate and ally of the Jewish community,” Miller said. “I’ve been in discussion with Jewish leaders from across the country and am grateful to them for their kindness and forthrightness.”

Miller was not immediately available for an interview.

Before entering politics, Miller shared two posts on her personal Facebook page about an event featuring Marthe Cohn, a French Jew and Holocaust survivor who was on a speaking tour for a book she wrote about spying on the Nazis. Miller praised Cohn.

“Took the kids to hear this woman’s amazing story as a spy against the Nazi’s . She is 98 years old and on a speaking circuit! […] ended up dropping the kids off to find parking FAR away. Sadly, I was too late, but the kids got a seat! They were super excited about her story!” Miller wrote.

She also posted about a family member bringing her Dead Sea mud from a trip to Israel and shared a video featuring Israeli Prime Minister Benjamin Netanyahu describing the threat of a nuclear Iran.

Miller’s comments about Hitler were delivered at a “Save the Republic Rally” hosted by Moms for America, a right-wing group. The organization promoted the rally using the #StoptheSteal hashtag that was an umbrella term for the series of rallies held in D.C. on Tuesday and Wednesday promoting baseless conspiracy theories that the November election had been stolen from President Donald Trump.