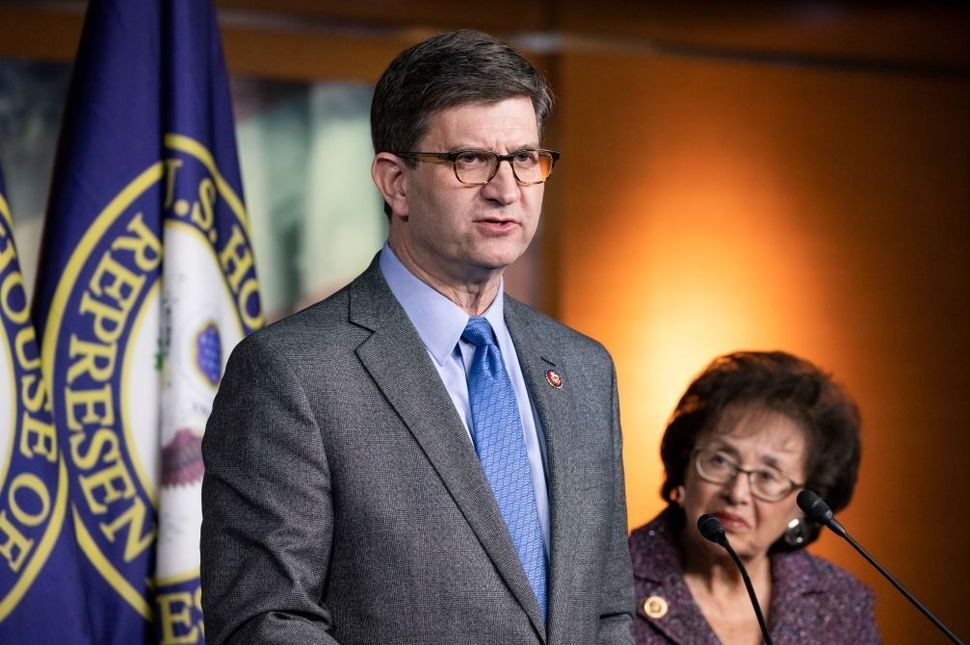 Representative Brad Schneider (D-IL) speaks about his experiences during a trip to Israel and Auschwitz-Birkenau as part of a bipartisan delegation from the House of Representatives while Representative Nita Lowey (D-NY) listens on January 28, 2020 in Washington, DC. Image by Getty Images

“Wearing a mask is not a political statement, it is public health guidance, common courtesy, and simply what should be expected of all decent people,” Schneider said on Twitter.

The Chicagoland congressman has proudly discussed his Jewish identity. He is known as a strong supporter of the U.S.-Israel relationship, including backing anti-BDS measures in the House, and has also spoken out against antisemitism.

Schneider’s COVID-19 diagnosis comes after Reps. Pramila Jayapal, D-WA. and Bonnie Watson Coleman, D-NJ, announced that they had also tested positive. All three blamed Congressional Republicans who refused repeated requests to wear masks while House members sheltered in place at an undisclosed location during the attack on the U.S. Capitol last Wednesday.

Schneider said he had no symptoms and was isolating in his basement to keep distance from his wife, who he said was at high-risk of contracting COVID-19.

Rep. Lisa Blunt Rochester, D-DE, passed out masks in the room and said many House members accepted her offer. However one group of Republican representatives declined repeated entreaties to wear masks.

Several Republican lawmakers in the room adamantly refused to wear a mask, as demonstrated in video from Punchbowl News, even when politely asked by their colleagues. https://t.co/4VS8mPn6Uf

Schneider said at a press conference Tuesday that after about an hour sharing a main room with Republican members who would not wear masks, he realized he could move to a smaller room away from them.

He said he had received well wishes from some of his Republican colleagues and emphasized his belief in bipartisanship. However, Schneider said that the refusal of some members of Congress to wear masks — with an intent, he said, to harm others — was undermining the ability for Democrats and Republicans to work together.

“I’m going to continue to try to build those bridges,” Schneider said. “But I also think it’s important to understand you can’t put the foundation of a bridge in quicksand.”