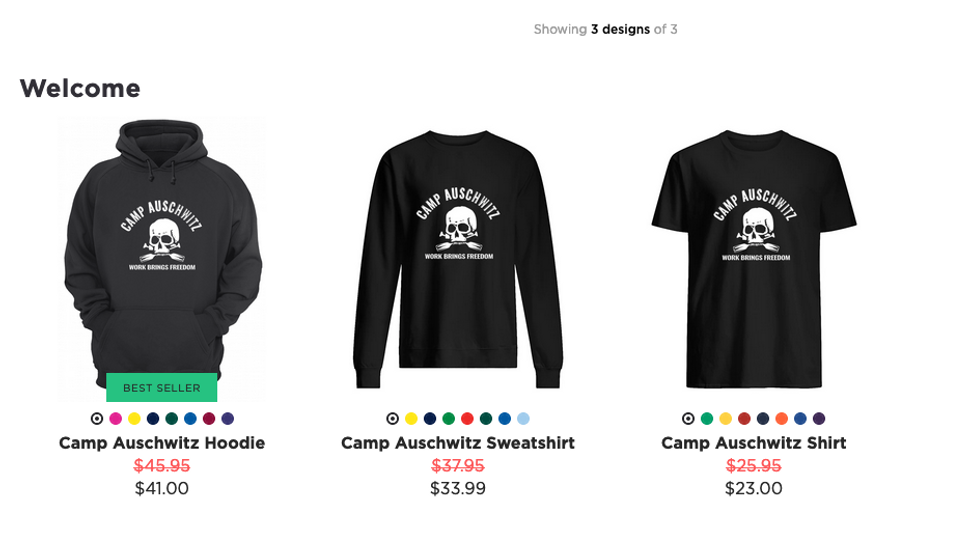 (JTA) — Etsy has removed a T-shirt with the phrase “Camp Auschwitz” on it after images of a rioter involved in the deadly Capitol insurrection with the same words on his sweatshirt circulated in recent days.

The Auschwitz-Birkenau Memorial and Museum tweeted at the e-commerce company, which sells customized craft items, saying that the shirt it found on the site was “painful to Survivors[sic] and disrespectful to the memory of all victims of Auschwitz.”

.@Etsy Please remove this. It is painful to Survivors and disrespectful to the memory of all victims of Auschwitz. pic.twitter.com/TIWWK2DEVG

The man in the sweatshirt at the mob riot has been identified as Robert Keith Packer. His sweatshirt also contained a translation of the infamous phrase on the Auschwitz gate, “Arbeit macht frei” (“Work brings freedom”), and said “Staff” on the back.

“Etsy’s long-standing policies prohibit items that promote hate or violence, and we are vigilantly monitoring the marketplace for any such listings that may have been inspired by recent unrest,” an Etsy spokesperson told Reuters on Monday.

Etsy was not the only company to remove shirts with the phrase from its site — Teespring and TeeChip also took them down, according to Newsweek. Teespring added that it will make a donation to the Auschwitz museum.

Over a million Jews and others were killed at the Auschwitz concentration camp during World War II.