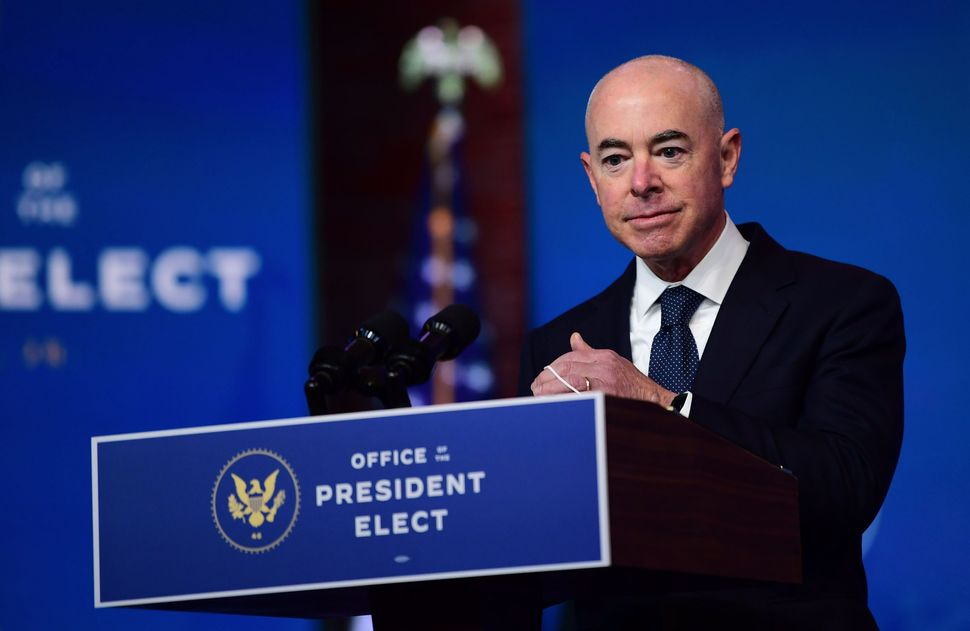 The Anti-Defamation League endorsed Mayorkas, also citing the urgency of the recent rise in extremist violence and singling out the deadly Jan. 6 riots at the Capitol.

“Confirming an extremely qualified Secretary of Homeland Security is especially crucial in the wake of the domestic terrorist threat that has rocked our nation in recent years, including the deadly insurrection at the U.S. Capitol earlier this month,” said the ADL letter sent Monday to the top Democrat and Republican on the Senate’s Homeland Security Committee, which must affirm Mayorkas for confirmation.

The letter the O.U. leadership sent Jan. 13 to the same senators, stops just short of an endorsement, which mainstream Jewish organizations generally avoid to preserve their nonpartisan status. Still, it is unusual in expounding on the O.U.’s warm feelings for a nominee, calling Mayorkas “a reliable and valued leader.”

The O.U. and the Anti-Defamation League are not the only Jewish groups pressing for a quick confirmation for Mayorkas, a Cuban American Jew who was deputy Homeland Security secretary under President Barack Obama.

The O.U. letter, which the group released Monday to media, reflects broader concerns that the Biden administration will not be fully functional as soon as Biden is sworn in on Wednesday, in part because Trump’s refusal to concede the election has slowed the transition. While Trump had a number of top picks confirmed and ready to work by Jan. 20, 2017, as is the norm, the Senate has yet to confirm a single Biden Cabinet pick.

The letter outlines the O.U.’s past closeness with Mayorkas under Obama.

“The need for DHS to increase its work in combating violent extremism and thwarting violence targeted and the Jewish community, and other American faith communities, is even more pressing in 2021,” says the letter. “Based on our past experience with him, we are confident that, if confirmed to be Secretary of the Department of Homeland Security, Alejandro Mayorkas will lead this aspect of the Department’s work effectively.”

Mayorkas “was a reliable and valued leader in ensuring that DHS’s resources were utilized to enhance the security of our synagogues and schools in the face of threats,” the letter says. It concludes, “We pray your committee’s deliberations will be expeditious and serve the nation well.”

The ADL in a separate letter Monday to the top Democrat and Republican on the Senate Foreign Relations Committee, endorsed Biden’s pick for secretary of state, Anthony Blinken, and also made a case for a swift confirmation.

“Confirming a qualified Secretary of State is especially crucial as the world continues to grapple with the worst pandemic in generations,” the letter said.