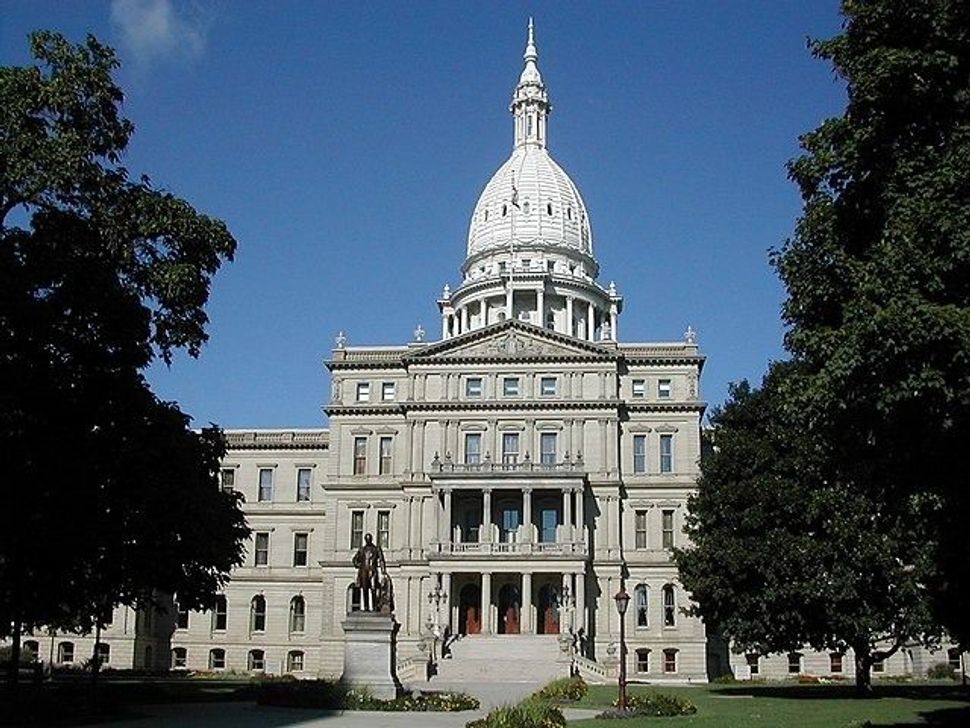 A protest at the Michigan state capitol was mostly peaceful, especially compared to the violent riots at the U.S. Capitol earlier this month. However, there was one commonality – antisemitism.

Just as a D.C. protester was photographed with in a “Camp Auschwitz” sweatshirt, the far-right protesters in Michigan were also seen bearing antisemitic imagery. In one photo taken by the AP’s Anna Liz Nichols, a man is seen holding a sign which features a smiling caricature of the president wearing a skullcap and holding both an Israeli flag and a menorah. Around him it reads: “Hey Donald! We thought you said America first!.”

According to the Detroit Jewish News, it’s not the first time the sign’s been seen either. The sign was recognized by the newspaper’s reporters from ongoing protests across the street from Temple Beth Israel. Those protests at the Ann Arbor synagogue first started 16 years ago.

The synagogue protesters are led by a man named Henry Herskovitz, who identifies himself as a former Jew. They have protested Israel’s policies in the West Bank, as well as a vague concept they call “Jewish Power.” The synagogues and its congregants, many of whom are engaged in a lawsuit against the protesters, have called it antisemitism.

“It’s really not about Palestinian human rights,” Nadav Caine, the rabbi of Beth Israel, told the Forward in April. “I wish it were … It is really about the ‘fact’ that Israel and the Jews control the world and it’s all those antisemitic tropes about [how] we control the banking, we control the American government, control the military.”