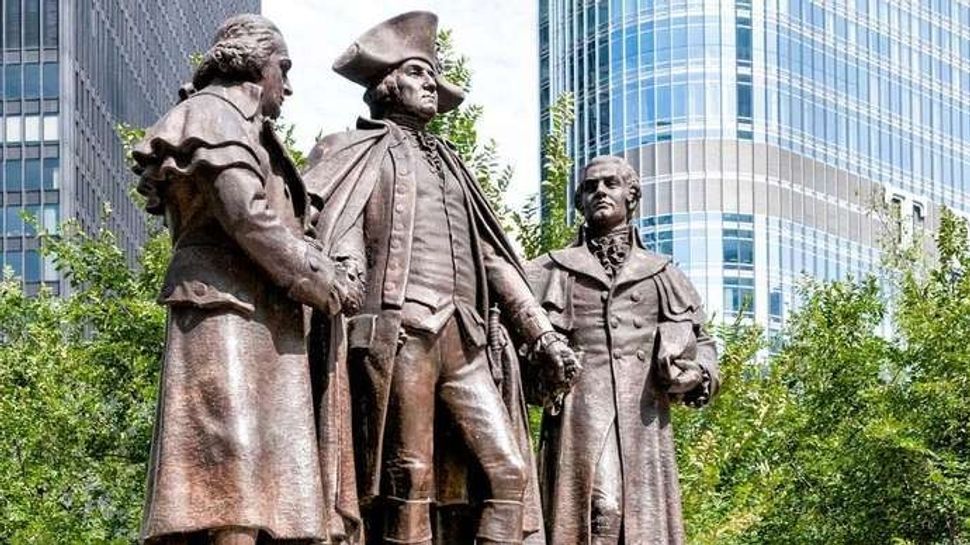 A public monument featuring Revolutionary War financier Haym Saloman, a Polish-Jewish American businessman, may be removed from where it stands in Chicago’s Heald Square. The monument, along with 40 others, is under review by the Chicago Monument Project as part of the city’s effort to “address the hard truths of Chicago’s racial history.”

The project was launched by Chicago’s City Hall six months ago in the wake of the murder of George Floyd and the national reckoning on systemic racism, and originally included a collection of over 500 public monuments, commemorative plaques, and artworks. Now, Chicago Mayor Lori Lightfoot is calling for a public discussion on a selected few, including The Robert Morris-George Washington-Haym Salomon Monument.

“This project will be a powerful opportunity for us to come together as a city to assess the many monuments and memorials across our neighborhoods and communities — to face our history and what and how we memorialize that history,” Lightfoot said in a statement.

The monument in question depicts George Washington standing with Robert Morris and Haym Salomon, both of whom were principal financiers of the American Revolution. Salomon also made major philanthropic contributions to the Philadelphia Jewish community and founded the first Philadelphia synagogue, Mikveh Israel.

The idea for the monument came in the mid-1930s from Barnett Hodes, a Chicago attorney and politician also of Polish Jewish descent. After the proposal to honor Saloman alone had been rejected in other states, Hodes suggested the Chicago monument be erected to commemorate Revolutionary patriots and underline the “broader ethnic contributions to the Revolutionary war.”

The inscription at the base of the bronze statue is taken from taken from a Washington’s 1790 speech to the Hebrew Congregation of Newport, RI:

“The government of United States, which gives to bigotry no sanction, to persecution no assistance, requires only that they who live under its protection should demean themselves as good citizens, in giving it on all occasions their effectual support.”

The Chicago Monument Project has not stated why they are reviewing The Robert Morris-George Washington-Haym Salomon Monument in particular. But according to the project’s criteria, any monument that has made its shortlist might be guilty of “memorializing individuals with connections to racist acts, slavery, and genocide, promoting narratives of White supremacy, and/or presenting one-sided views of history,” among other factors.

Washington was a slaveholder as was Salomon, a descendant of Sephardic Jews who were expelled during the Inquisition and settled in Poland. An advertisement in the “Pennsylvania Packet” on November 18, 1780 offered $600 for the return of a runaway slave to Hyam Salomon. 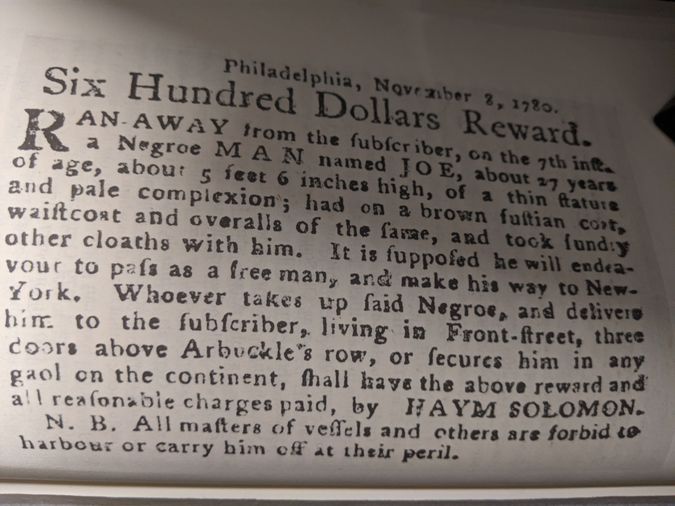 An advertisement in the “Pennsylvania Packet” on November 18, 1780 for the return of a runaway slave to Hyam Salomon. Courtesy of Jonathan Sarna

“The city’s public art collection is a defining characteristic of Chicago and it should reflect and respect all Chicagoans,” said Department of Cultural Affairs and Special Events Commissioner and Advisory Committee Co-Chair Mark Kelly. “The public’s input will now help us evaluate the collection and to commission new works.”

The public can participate and submit feedback on the monuments until April 1, at which point, a committee will determine the monuments’ fates.

Correction: A previous version of this article erroneously reported that Hyam Salomon was not a slaveholder.