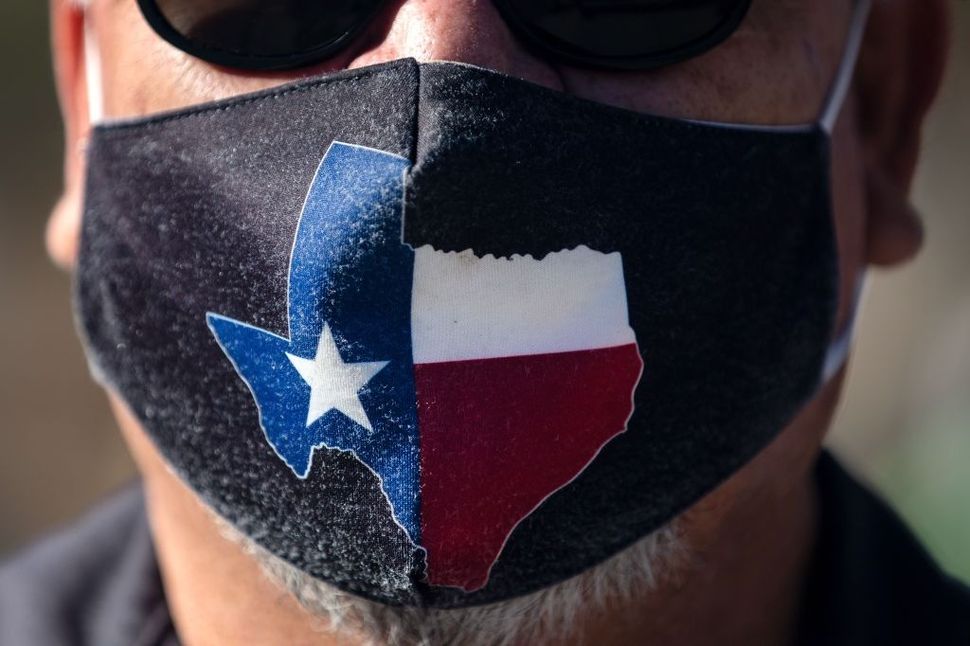 The outdoor event, advertised online as “The Official Texas is Now Open Party! #BurnThatMask,” is scheduled to be held March 10, the day that Abbott’s decision goes into effect. The event description promises that attendees will be able to burn their masks in a communal bonfire while enjoying entertainment, refreshments and conservative speakers at a private home in the northern Dallas suburb of Parker.

Dallas Jewish Conservatives is hosting the party alongside other local conservative groups in the Dallas-Fort Worth area, including Hispanics Against Socialism, DFW Deplorables and Ladies of Liberty.

“I pounced on the opportunity” to host the event, DJC founder and president Benji Gershon told the Jewish Telegraphic Agency, adding that he threw it together only a day after Abbott’s announcement that he would be lifting the mandate. “We can all get together and celebrate the fact that businesses can now be 100% open… It’s a liberating experience.”

Around 150 people have thus far indicated they will be attending, Gershon said.

It’s not the first time that Jewish leaders have called for masks, which prevent the spread of COVID-19, to be burned en masse. In October, a group of Orthodox Jews in Brooklyn burned masks in the street as part of a public protest against new restrictions that would close schools and limit synagogue attendance in areas with rising infection rates. That protest was followed by several others against the rules that were explicitly political, with participants expressing support for then-President Donald Trump, who did not support mask wearing.

But despite the title of the event in Texas, Gershon – who also works in early-stage private equity for tech startups — said his group isn’t trying to take a firm stand against the idea of mask-wearing.

“I’m not personally anti-mask. There are reasons for people to wear a mask,” Gershon said. “Masks have benefits as far as reducing the spread in certain situations.” His objection, he said, was to the government mandating mask wearing. “Enough’s enough with the forcing of the masks.”

Gershon said his group would still enforce mask-wearing and other COVID-19 safety protocols at its upcoming in-person events, including a panel on gun rights to be held the day after the mask-burning.

Gershon said the group plans to follow the requirements of the private business owners who host their events, and that for now, Studio Movie Grill, the Dallas-based movie theater chain hosting their upcoming events, is continuing to require mask-wearing. The CEO of Studio Movie Grill, Brian Schultz, is also a Jewish conservative whom Gershon said is a friend of the group.

The mask-burning party won’t be a specifically Jewish event, although kosher food will be served, Gershon said. A conservative Jewish comedian, Evan Sayet, is also a featured speaker.

Founded in 2016, the DJC aims to bring together “middle-to-right” Jews from various backgrounds and ages, alongside “Israel-loving Christians,” according to Gershon, who says he currently has 1,500 members. Alongside secular conservative political events, he has hosted Shabbat retreats and events tied to Jewish holidays.

In the coming months, Gershon hopes to create a PAC to fund and endorse conservative political candidates, as well as create other “chapters” for Jewish conservatives around the country. Its reach in the state is growing: Later in March, the group will host a town hall with Texas GOP Chairman Allen West.

Texas reported a weekly average of 7,200 new COVID-19 cases as of March 3, according to data provided by the New York Times – a sharp decline from its average of more than 22,000 cases in January. As of March 3, around 13% of Texans had received at least one dose of the COVID-19 vaccine; 7.5% of the state’s population reported being fully vaccinated.

Health experts still strongly advise all Americans to continue wearing masks and follow other COVID-19 safety protocols until a larger proportion of the population has been vaccinated.