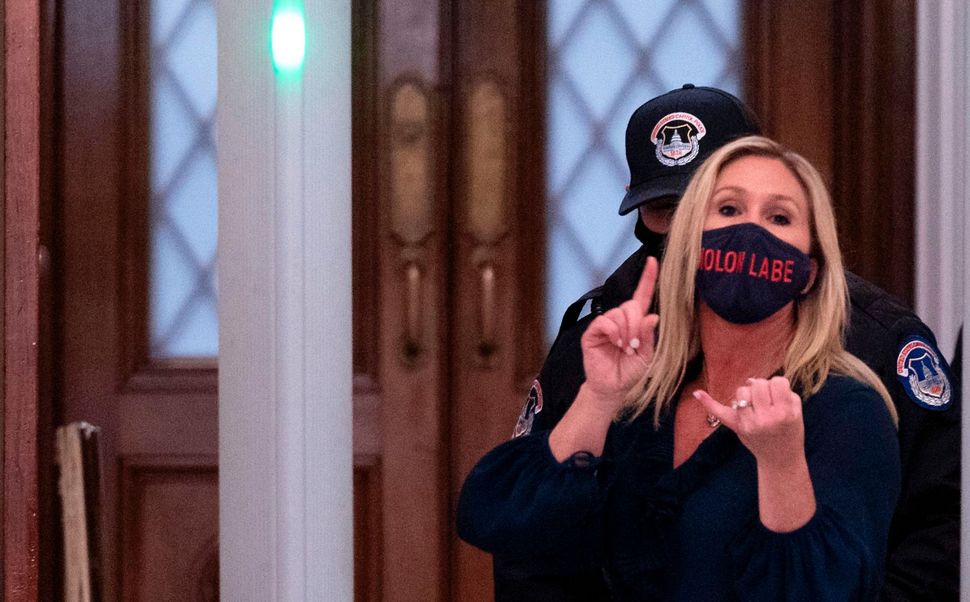 Representative Marjorie Taylor Greene (R-GA) shouts at journalists as she goes through security outside the House Chamber at Capitol Hill in Washington, DC on January 12, 2021. By ANDREW CABALLERO-REYNOLDS/Getty Images

Rep. Marjorie Taylor Greene, who was stripped of her House committee assignments last month for antisemitic and other incendiary comments, toured Orthodox areas of Brooklyn and Long Island on Monday, according to a community leader who hosted her.

Nachman Mostofsky, executive director of Chovevei Zion, an Orthodox conservative group based in Brooklyn, told the Forward that the Georgia Congresswoman had visited a Brooklyn yeshiva, matzah bakery, kosher supermarket and restaurant, and also some Orthodox areas of the Five Towns, a collection of heavily Jewish suburbs in Nassau County, N.Y.

Mostofsky declined to give more details about the visit but said his group had invited Taylor Greene, who was elected in 2020, as part of an educational tour.

A picture circulated on social media showed Taylor Greene seated at a table at Pizza Time on Avenue J in Midwood.

Taylor Greene’s embrace of QAnon conspiracy theories and outrageous comments including suggesting that a Jewish space laser had sparked wildfires in California in 2018, led the Democratic-controlled House to take the rare step of removing her from Congressional committees.

She had also spoken at the Jan. 6 “Stop the Steal” rally at the Capitol protesting the certification of Joe Biden’s election to the presidency, which Motofsky attended; his brother, Aaron, faces federal charges for his role in the riot that erupted that day.

Nachman Mostofsky said his group has been hosting several Republican members of Congress, and saw no reason not to welcome Taylor Greene, whom he called a friend.

“Knowing the congresswoman for a bit now, she has been nothing but a friend and ally for our community,” he said in an interview Monday night. “From government interference, education, religious freedom, we share what is commonly called Judeo-Christian values.

“We wanted to show her authentic Judaism,” he added, “and we felt before Passover would be a great time.”

Taylor Greene could not be reached for comment on Monday night.