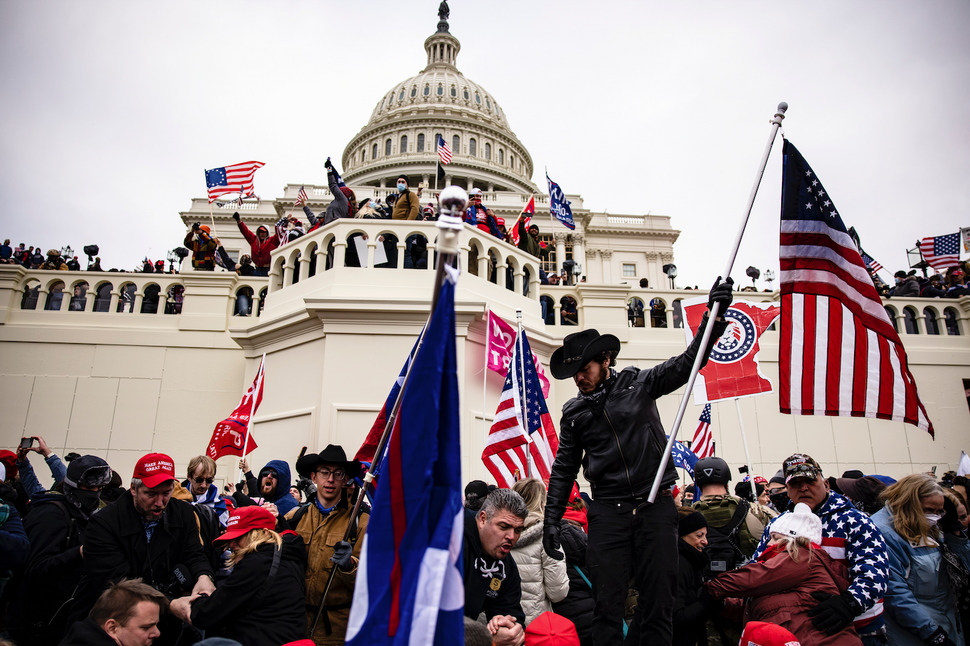 Hundreds were arrested after the riots on the Capitol. Photo by Samuel Corum/Getty Images

Cory and Felicia Konold, Jewish siblings who were arrested for their participation in the Jan. 6 riots on the Capitol, have petitioned a federal court to let them celebrate Passover at the home of their grandparents in Tucson, Arizona.

According to a court filing, a condition of their release bars contact “directly or indirectly” with their co-defendants, including each other.

Felicia Konold, 27, and her brother Cory, 25, were arrested on Feb. 11. They were released on bail on Feb. 18, when they were ordered to remain at their respective homes.

The siblings were accused of marching on the Capitol as part of a crowd of Proud Boys, a white nationalist group that was involved in the insurrection in D.C. The FBI included photos of the siblings at the event and said that Felicia was recruited into the far-right organization.

“I’m not just fighting for my freedom,” Felicia told a local news station. “I’m fighting for all of America’s freedom.”

Their father, 62-year-old Robert Konold, told the Arizona Daily Star that he was shocked when he heard the news. “I’m just a deer in headlights at this point,” he told the newspaper shortly after his children were arrested.

The request with the U.S. District Court asks for the Konold siblings to attend the second Passover Seder on Sunday evening at the home of their grandparents, Maryland and Ron Evans. Joseph R. Conte, the attorney representing the Konold siblings, wrote in the petition that “although the defendants will be in direct contact, there will be no discussions concerning the case.”