(JTA) — There’s never been a great, definitive American movie about a bar mitzvah.

And after “Donny’s Bar Mitzvah,” a new movie that arrived this week on Amazon Prime and iTunes, there still hasn’t been.

The film, directed by Jonathan Kaufman (referred to in the media notes as “Jonny Comebacks”), is an indie comedy set entirely during the bar mitzvah party of Donny Drucker (played by Steele Stebbins), a boy from a highly dysfunctional family, in 1998 Michigan. It’s something of a festival of raunch — of a sexual as well as a bodily fluid nature — full of gags and running jokes that fail much more often than they succeed. 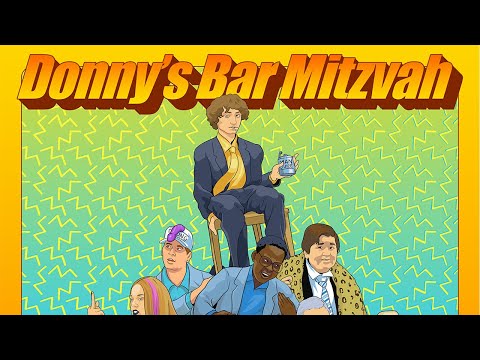 “Donny’s Bar Mitzvah,” which is also having a theatrical release in New York City on Friday, is mostly an homage to the comedy cinema of the 1990s. This includes both the gag-a-minute sensibility of the “Naked Gun” series and other such films that reigned in the early part of the decade, and the extreme raunch of comedies such as “There’s Something About Mary” and “American Pie at the tail end.

In keeping with the period setting, the film is meant to look like a bar mitzvah video from ’98, having the appearance of being shot on VHS with a camcorder, complete with a 1:33-1 aspect ratio. It even looks as if it were edited using the Video Toaster, with a distracting overreliance on silly sound effects.

But the main event, so to speak, is the gross-out gags. The level of vulgarity is rarely ever seen in studio comedies anymore, although “Donny’s Bar Mitzvah” makes a convincing argument for why those types of movies fell out of favor in the first place. It also doesn’t help that the film’s main running jokes — from a crime subplot involving Danny Trejo to a pregnancy that progresses over the course of a single night — are just never funny.

Over the course of the long night, viewers watch the teenagers acting gross and inappropriate, but the adults are considerably grosser and even more inappropriate. So much happens — open cocaine use, butt-chugging, people sneaking off to have sex, bartenders throwing bottles — that isn’t anywhere close to plausible.

For a movie set during a bar mitzvah, there’s a lot less overt Jewishness than one might expect. There’s a gag that the synagogue is called “B’nei Beth Baruch Moshe Shalom Kodesh Avenu Sarah Rivkah Hummas Synagogue.” The film doesn’t show the ceremony, but it does have Jewish grandmothers being yentas, working overtime to arrange couplings among their grandchildren. And it also attempts to knock down the stereotype that “Jews can’t dance.” (The now-embattled New York Gov. Andrew Cuomo may have caught flak for making a joke about that back in 2018, but it’s not generally among the most well-known stereotypes about the Jewish people.)

Perhaps “Donny’s Bar Mitzvah” deserves credit for not indulging in tired ethnic stereotypes. But overall, Judaism doesn’t matter a great deal to the movie, which never even establishes whether most of the characters are Jewish or not. There’s a monologue toward the end about how bar mitzvah parties these days are more for the parents than the kids, but that’s far from a new observation — it had already been the topic for a movie 15 years earlier, “Keeping Up With the Steins.”

Similarly, there’s not a lot of sting in a boy getting stoned at his own bar mitzvah if one has seen the Coen brothers’ “A Serious Man.” That film found intriguing specificity in a bar mitzvah set in 1967 that “Donny’s Bar Mitzvah” can’t find for one taking place in 1998 — that is, unless you count references to “Where’s Waldo” and the “Wassup” beer commercials.

What “Donny’s Bar Mitzvah” gets most wrong, however, is it misunderstands the very movies to which it’s seeking to pay tribute.

While raunch was a huge part of the oeuvre of the Farrelly brothers and their various imitators — leading to the rise of Jewish director Judd Apatow the following decade — those movies tended to ultimately hinge on overarching values of love, friendship and heart. “There’s Something About Mary” may have had closeups of body parts stuck in zippers and body fluids appearing where you don’t expect them. The Apatow-produced “Superbad” may have featured high schoolers delivering wildly frank and detailed sex talk. But in the end, the audience is still invested in the lead characters.

“Donny’s Bar Mitzvah,” beyond all its faults, won’t make any viewer feel anything in the kishkes.