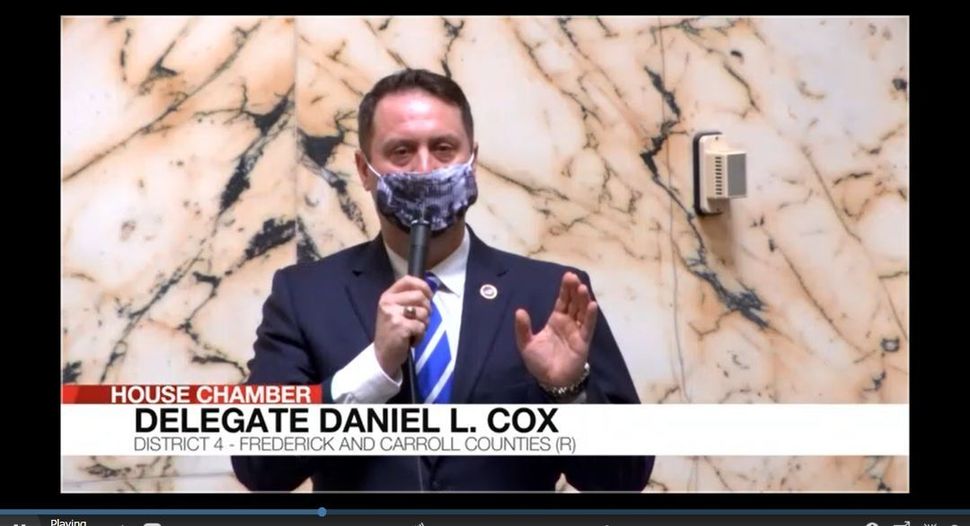 Maryland Del. Daniel Cox, sporting a mask with a Nuremberg trials theme, explains why he is voting against a law that would allow children to consent to mental health care, during a vote in Annapolis, April 8, 2021.

(JTA) — Daniel Cox, a Maryland Republican in the state legislature, said he would mark Yom Hashoah, Israel’s Holocaust Remembrance Day, by voting against a bill that would allow children to consent to mental health care.

Cox said his mask had a picture from the Nuremberg trials printed on it, and compared the bill to the Nazi’s infringement on “the rights of parents.”

“One of the things that was interesting and very sad in the Nuremberg trials, was the fact that medical professionals interfered with parental rights. And what was the result of those trials? Well, the European Union passed the European Commission on Human Rights, guaranteeing that never again will the state and the healthcare community interfere with the rights of parents, and the rights of family,” he said Thursday. “That’s what this bill does.”

The outrage followed immediately. Barely a minute into Cox’s remarks, Shane Pendergrass, a Democratic delegate, asked to be able to speak from a “point of personal privilege” as a Jew.

“I am enormously affronted as a Jew when you in any way compare this bill to the Holocaust, especially today,” she said. “Shame on you.”

Cox protested that he was not comparing the bill to the Holocaust, but to Nazi legal practices.

“This bill interferes with the sacred right of parents and their children,” a right he said was enshrined after the Nuremberg trials. “That is a fact.”

The Jewish Community Relations Council of Greater Washington in a statement called the comparison “unconscionable.”

“Delegate Cox’s words are an insult to the thousands of mental health providers throughout the State of Maryland and are part of a disturbing pattern of public officials using Holocaust and Nazi analogies for political ends,” the statement said. “The JCRC calls on the Maryland House of Delegates to condemn this offensive comparison and to hold Delegate Cox responsible for his reprehensible remarks on this sacred day.”

The bill lowers the age of consent to mental health care to 12. It is likely to pass in the Democratic-led legislature.