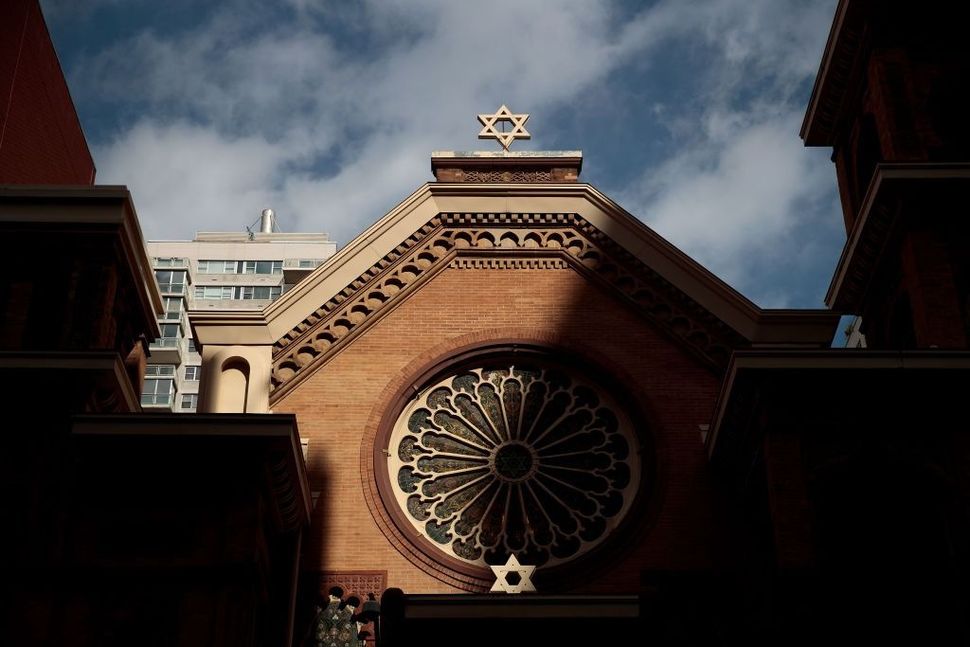 The leading candidates for mayor of New York City renewed their vows to fight antisemitism in response to a new report that shows New York State accounted for nearly 17% of the 2,024 antisemitic incidents documented nationwide in 2020.

The state led the nation with the most documented antisemitic incidents — 336 out of 2,024 – according to an audit published by the Anti-Defamation League on Tuesday. While assaults were down by 66% compared to 2019 – when 35 attacks were recorded, including a deadly stabbing in Monsey, N.Y. — there was a 76% increase in incidents against Jewish institutions, up to 44 from the previous year.

Though not tallied in the report, five synagogues in the Riverdale neighborhood in the Bronx were vandalized in recent days and are being investigated as hate crimes.

Nationwide, antisemitic incidents fell 4%, but ADL officials noted that the total number was still the third highest on record since the group began tracking them in 1979.

In statements to the Forward on Tuesday, candidates reiterated promises they made in a Forward survey on fighting hate crimes and antisemitism. Among their suggestions: clearing away antisemitic graffiti faster and enhancing school curricula to address the topic.

The following are the candidates full statements in alphabetical order:

“I have said many times, and will continue to say, that public safety is a prerequisite to prosperity. New Yorkers need to feel safe at home, in the streets, and online, and these statistics on hate and antisemitism are extremely troubling. We can combat anti-Semitic incidents through targeted policing, rapid graffiti removal, and robust partnership between the NYPD and our district attorneys, and defeat the source of hate through an expanded curriculum in our public schools. As borough president, I’ve hosted dozens of ‘Breaking Bread, Building Bonds’ gatherings with diverse groups of participants, and as Mayor, we will expand that program city-wide so we can break down the silos that separate us from each other and gain common understanding. I will have the Jewish community’s back as mayor, and the backs of those who protect them. My administration will have a zero-tolerance policy toward antisemitism and all bias-based crimes.”

“I am disgusted by the rise in bigoted attacks being carried out against our city’s critically important Jewish institutions. The Jewish community has been a vital part of our city, and these despicable acts, along with the cowards who perpetuate them, have no place in our city. They represent not only an attack on our Jewish friends, families, and neighbors, but an assault on the very values that make us all New Yorkers. We must condemn these antisemitic attacks, and all the hate inspired crimes being carried out against our fellow New Yorkers, and say with one, resounding, unified voice that hate has no home here. As Mayor, I will work with local law enforcement to ensure that all such crimes are fully investigated and prosecuted to the fullest extent of the law, and will work with my partners at every level of government to ensure that the Human Rights Commission and other agencies have the resources they need to prevent these heinous acts from being carried out in the first place.”

“The latest findings from the Anti-Defamation League’s 2020 audit are incredibly alarming and must serve as a serious call to action for our city’s leaders. For every documented incident we know that there are many others that go unreported. We must be diligent about proactively combating hate crime. Every New Yorker deserves to be safe on our streets, in our neighborhoods, in our homes—no matter what zip code you live in or the color of your skin or religion you practice. I believe that public safety and police reform do not need to be in conflict with one another.

“When I’m mayor, I will proactively confront and address hate crimes with smarter policing by increasing patrols in neighborhoods where attacks have happened and by investing in the resources necessary to investigate and solve hate crimes. My administration will follow the numbers and use a data-driven approach to ensure we are channeling resources where they are needed the most: in communities and neighborhoods hardest hit by these antisemitic attacks.

“We must also do more to combat stereotypes and misinformation. My administration will partner with trusted community and faith-based organizations of all backgrounds and launch a citywide public education campaign—and we’ll start in the early years by designing and teaching a children’s educational curriculum on bias and how to celebrate all cultures. New Yorkers need a leader with both the commitment and experience to make our city truly safe for everyone. We can’t afford another day without action or accountability. My plan will combat antisemitism, drive down crime, and restore New Yorkers’ trust in the NYPD. As New Yorkers, we must all stand together to combat hate in all forms. As a mayor, I will be committed to standing with all of our communities and keeping every New Yorker safe.”

“I want to be clear and unequivocal: the spike in antisemitic crimes is unacceptable. Discrimination and racism of any kind, towards any group, harms us all. As I have said before, places of worship are sanctuaries and must be protected. As if we already aren’t living through one of the toughest years with the crisis of Covid-19 and the crisis of the economy, the crisis of racial and religious injustice continues to divide us. New York City is the greatest city in the world — the melting pot of cultures and home to a large Jewish community that we are proud to hold. From Manhattan to Brooklyn, to Queens and everywhere in between, our diversity is truly our strength. I am committed to weeding out systemic, institutional and cultural bias/racism from the fabric of our great city – wherever it may seep through.”

“The rise in hate-based violence is real, and it’s truly, deeply troubling – and it’s happening not only in New York but across the country. We need to be absolutely clear: hate-based violence, like we’ve seen recently in Riverdale, is never acceptable. We can do more as a city, and it starts with our children. I’ve worked with Assemblymember Nily Rozic to expand Holocaust education and hate crime awareness and prevention to educate our kids on the dangers of prejudice and bigotry.

“We also need the NYPD to do a better job identifying hate crimes from the start so they can respond to incidents and support targeted communities. And for the violent incidents, we need to refocus on raising the clearance rate, which has gotten so low that we’re now solving only one of every four violent crimes that occur. As mayor, I will always stand with targeted communities and work with them hand in hand to provide support for impacted people, families, and institutions. And my message will be unequivocal: hate is not welcome here.”

“Antisemitism is hate plain and simple and we must fully confront and condemn it in all its forms. New Yorkers deserve to feel safe in their communities and we must all come together to denounce these horrible antisemitic crimes. Hate must have no place in New York City.”

“These latest statistics about the staggering rise in antisemitic hate crimes tell a story that far too many New Yorkers know and have felt already: the rise in hate violence is real and it is dangerous. These acts have no place in our City and must be condemned in the strongest terms, and we must also do everything in our power to hold individuals accountable and also stop such awful crimes from happening in the first place. We must unite behind our Jewish communities to protect our friends and neighbors and stand up everywhere where we see injustice.”

A representative for the Dianne Morales campaign did not respond to the Forward’s inquiry.

The ADL said that it’s unclear how much of an impact COVID-19 had on the numbers. But the findings suggest that despite the pandemic and social distancing, antisemitic incidents persisted in public spaces and online. The report also noted 21 reported Zoom bombing incidents interrupting religious services, synagogue meetings and Jewish schools across New York.

“Each one of these incidents are not just numbers,” said Rachel Grinspan, director of community affairs for ADL’s New York and New Jersey region. “They are not just statistics. They have people attached to them.”

Jonathan Greenblatt, the ADL’s CEO, said in a media briefing on Tuesday that elected officials need to speak out as the first measure to combat antisemitism. “We need people in positions of authority, from the president of the United States to the president of a local school board, to say again that our country, our communities are no place for hate,” he stressed.