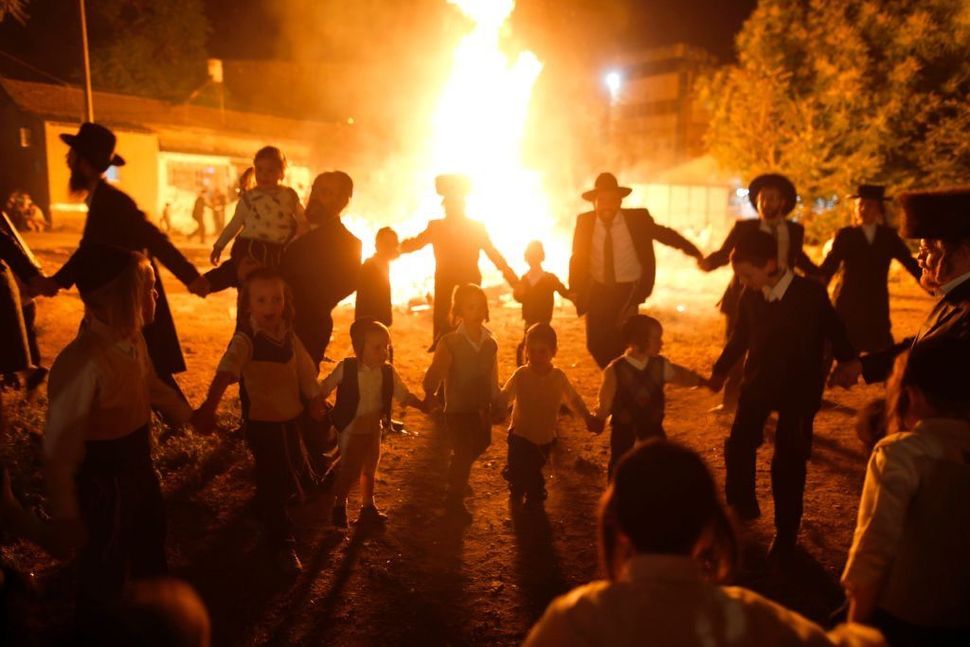 Ultra-Orthodox Jewish men and children dance around a bonfire in the Mea Shearim neighborhood of Jerusalem during the 2017 celebration of Lag B’Omer. Image by Getty

Tragedy has struck before on Lag Ba’Omer at Mt. Meron.

On Thursday, at least 45 Jews died and more than 150 were injured in a stampede at the mountain in northern Israel.

In 1911, an estimated 10,000 people gathered to sing and dance before the traditional Lag Ba’Omer bonfires on the mountain, not far from the city of Tsfat.

The event was chronicled by the Tsfat-born author Yehoshua Bar-Yosef in his 1949 book “Magic City,” according to the Jewish Press.

“Tzfat has never seen such a crowd before … happy enthusiasm gripped the residents, he wrote.

Just when the celebration reached its crescendo, the roof of the complex around the grave of Rabbi Shimon Bar Yochai collapsed. Dozens came hurtling down.

“About 100 people who were standing on the roof at the time fell from a height of 8 meters toward the courtyard of the building. Forty were injured. Seven were killed immediately,” Bar Yosef wrote.

Among those present that day was famed Israeli author and Nobel laureate S. Y. Agnon, who had walked for five days to celebrate on the mountain and who understood his survival as a miracle.

“The miracle that was done for me at the revelry of Rabbi Shimon Bar Yochai in Meron, was that a balcony fell and twenty-seven Israelites were killed, and I, who had stood a little while before with all those saints remained alive,” he wrote, though Bar Yosef and other historians cite 11 total dead.

Bar Yochai, who lived during the 2nd century, is credited with composing the Zohar, a key kabbalistic text.

At the time, many blamed the tragedy on communal leadership charged to care for the site. They were accused of mostly squandering funds donated for its upkeep.

But the religious authorities of Tsfat proclaimed the tragedy not a failure of physical infrastructure, but divine retribution for the gender mixing at the event. The next year, they instituted a ban on women at the celebrations.

Two years later, however, it was overturned after a feminist protest.