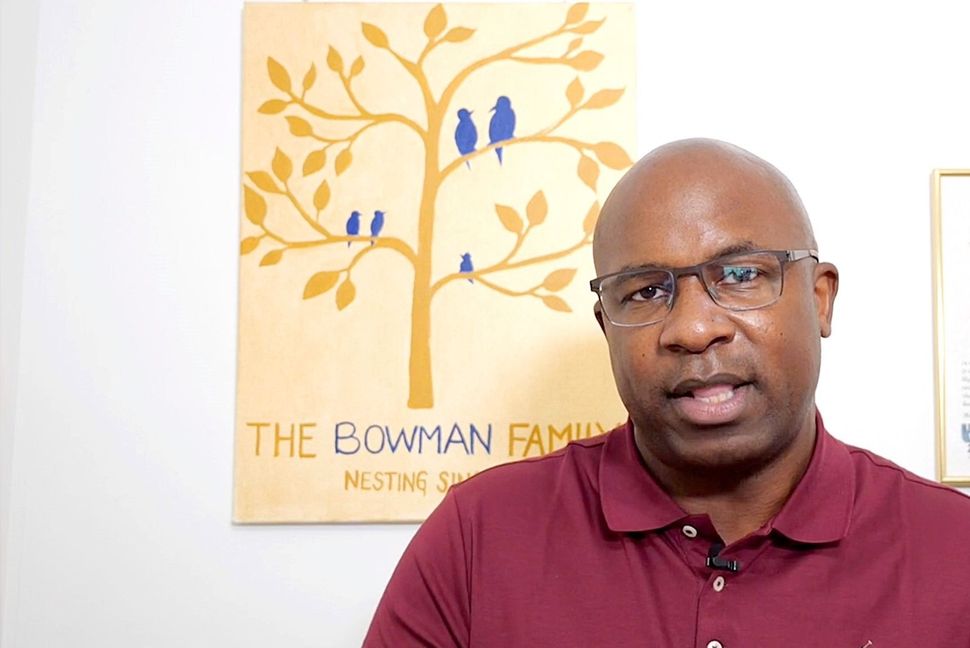 Congressman Jamaal Bowman of New York is defending his support of a bill that would regulate U.S. military assistance to Israel, a measure opposed by many mainstream Jewish and pro-Israel groups.

Bowman is one of 18 Democratic House members who have co-sponsored a bill introduced by Congresswoman Betty McCollum of Minnesota that prohibits Israel from using U.S. aid for the detainment of Palestinian children by Israeli security forces in the Palestinian territories and for unilateral annexation of parts of the West Bank.

“My decision to sign on to this bill was not in a vacuum. It was made in consultation with many within the Jewish community in the district who also supported the bill,” Bowman said in a conversation with Rabbi Michael Miller, executive director of the Jewish Community Relations Council of New York, which was posted to YouTube on Monday.

“In order for us to get to a two-state solution, we have to have honest conversations about what’s happening on the ground — to ensure the long term safety and security of Israel, of the Jewish community and of the Palestinians there.”

“I think honest conversations about what’s happening, transparency around how our aid is being used will take us one big step closer to a true two-state solution, which we’ve been far apart from for my entire life,” he added.

The interview is part of a series of one-on-one conversations with members of the New York congressional delegation.

The American Israel Public Affairs (AIPAC) has denounced the McCollum bill as a “baseless libel against Israel” and launched an action alert urging members to contact their representatives to oppose the legislation. The Democratic Majority for Israel called it a “one-sided, demagogic anti-Israel” measure. Rabbi Avi Weiss, the founding rabbi of the Hebrew Institute of Riverdale, created an online petition expressing opposition to Bowman’s move.

Miller told Bowman the JCRC was “dismayed to learn” that he was supporting a bill that would place restrictions on aid to Israel.

“The bill doesn’t seek to condition aid outright,” Bowman maintained. “The bill calls for more transparency in terms of how the aid is being used.”

Bowman, a first-term congressman representing New York’s 16th District, is closely aligned with the four congresswomen — Alexandria Ocasio-Cortez of New York, Rashida Tlaib of Michigan, Ilhan Omar of Minnesota and Ayanna Pressley of Massachusetts — known as “The Squad.” He received the backing of the Justice Democrats, a progressive political action committee, among others in his challenge last year of former congressman Eliot Engel, the chairman of the House Foreign Affairs Committee. Last week he delivered a response to President Joe Biden’s address to a joint session of Congress on behalf of New York’s Working Families Party.

The congressman responded that he’s engaged with “the robust and diverse Jewish community within the district ” prior and since signing on to the bill. Bowman also noted that he recently met with Israel Nitzan, the acting Israeli consul general in New York, to discuss the Israeli-Palestinian conflict and to develop a working relationship.

Bowman also sought to make clear that he is not seeking to align himself with anti-Israel and pro-BDS groups. “I do not support the BDS movement,” he told Miller. “I do not support the eradication of Israel. Israel has the right to exist, it has a right to its homeland, it has a right to self determination, and I’m here to support that right. And even though it may not look like it on the surface with this bill, I believe that conversations in the bill begins conversations which will lead to the ultimate safety and security of the people of Israel.”

In the interview, Bowman also said he disagrees with groups lobbying politicians against traveling to Israel on sponsored trips. In a recent questionnaire, the Democratic Socialists of America’s local chapter asked Council candidates to pledge “not to travel to Israel if elected… in solidarity with Palestinians living under occupation.” The DSA later clarified that it was referring to the JCRC-sponsored annual trips.

“How can we have real conversations if I’ve never been there?” he asked.

Bowman said that he’s “looking forward” to visiting Israel “as soon as COVID is lifted” and “I encourage other people to go.”