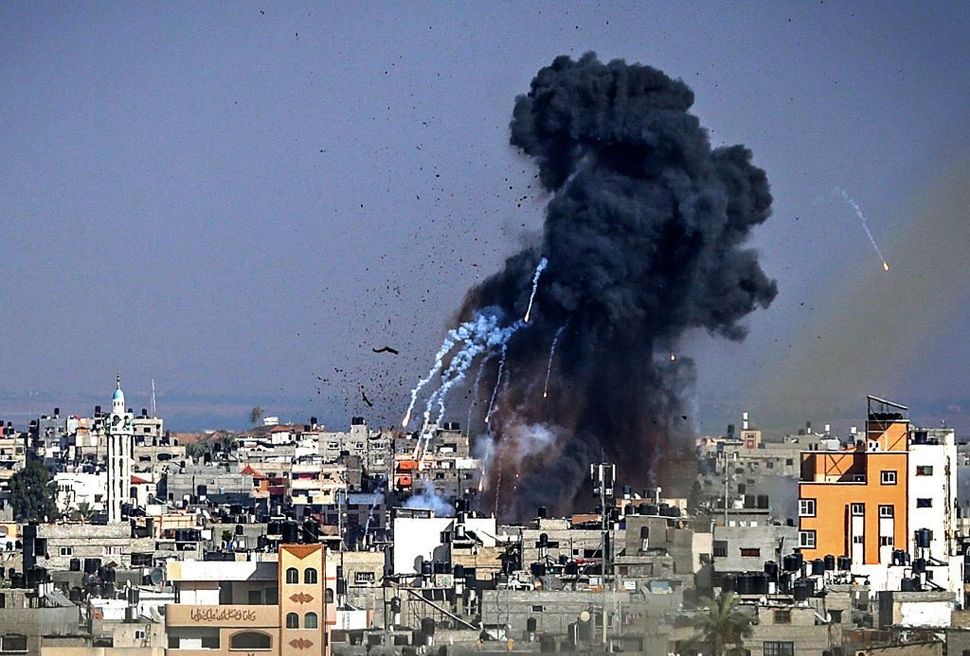 Smoke billows from Israeli air strikes in Gaza City, controlled by the Palestinian Hamas movement, on May 11, 2021. Photo by Anas Baba / AFP via Getty Images

Two in Israel were killed Tuesday following rocket fire from Gaza, as a heavy barrage of rockets battered the southern city of Ashkelon.

Dozens of Israelis have been wounded by rocket fire and shrapnel since Monday’s escalation with Gaza, as Hamas claimed responsibility for 137 rockets which were launched toward Ashkelon and Ashdod over a five-minute period.

As Israel’s flare-up with the Strip enters its second day, the city of Ashkelon has been especially pummeled and the army instructed its residents to remain in sheltered areas until further notice.

On Tuesday afternoon, two people were killed in Israel after a house was directly hit by a Gaza rocket. Five more sustained light injuries.

About two hours earlier, an empty school in Ashkelon as well was directly hit by rocket fire, the Israel Fire and Rescue Authority reported. Firefighters searched the debris to ensure nobody was trapped.

Four of the 23 people injured are members of the same family. The two buildings hit in the strike left the father, 40, in a moderate-to-serious condition after a sustained hit to the head; the mother, 39-years-old, is in moderate condition; and the two children, ages 6 and 12, were lightly injured.

The mother, Marina, said that she and her husband were “lying in the hallways and the kids on the mattresses” when the sirens went off. “There were lots of explosions, and the plaster ceiling collapsed, and then I saw that the children were injured. My husband cried out ‘help me,’ and I couldn’t reach him because the ceiling had collapsed.” When she managed to get to him, she saw him “covered in blood.”

Barzilai Hospital in Ashkelon announced that it is currently treating 61 wounded following the rocket attacks to the region, of which 32 patients were admitted to the emergency room.

Of the patients, one is in serious condition, one is moderately injured, and the rest are lightly injured or suffering from anxiety.

The incident came following a night of spiraling violence, with at least 200 rockets fired toward Israel, and over 130 strikes by the IDF on the coastal enclave reportedly killing 24.

The spokesman of Hamas’ military wing, Abu Ubaidah, claimed responsibility for the heavy rocket barrage on Ashkelon and Gaza border communities overnight. “We fired rockets at Ashkelon following an Israeli strike that hit a house west of Gaza City. If Israel continues to attack, we will turn Ashkelon into hell,” he said.

The Palestinian Health Ministry reported 26 dead, including nine children, and 122 injured in the coastal enclave, while the Red Crescent said that 520 Palestinians injured in Jerusalem on Monday, amid a bolstered police presence around the Al-Aqsa Mosque.