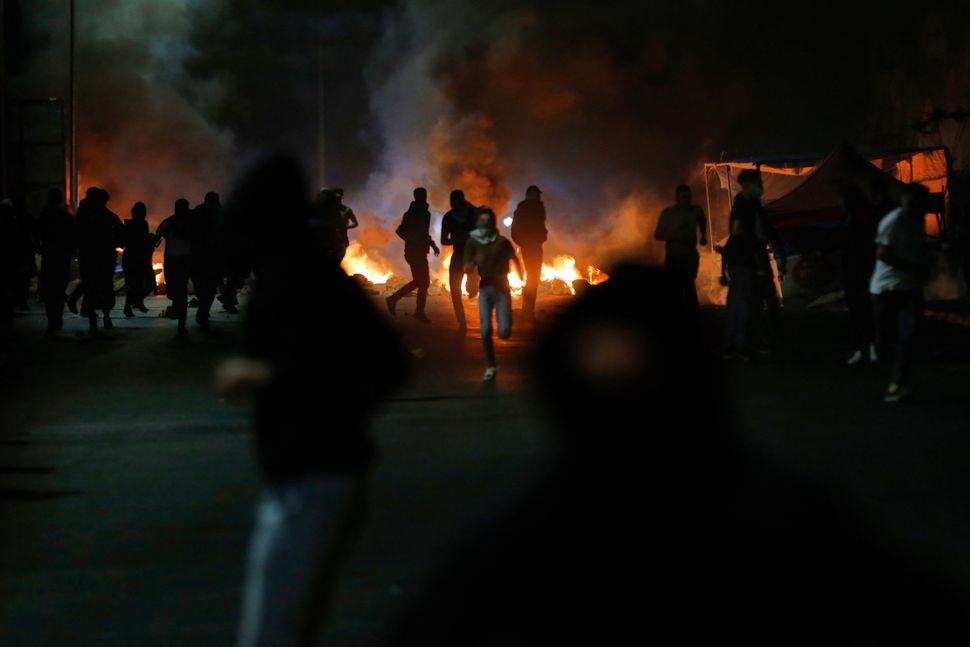 Palestinian demonstrators run away from the gas fired by Israeli soldiers during an anti-Israel demonstration over tensions in Jerusalem near the Jewish settlement of Beit El near Ramallah in the occupied West Bank, on May 13, 2021. By ABBAS MOMANI/Getty Images

Click here for live updates from Haaretz on the fighting.

The Israeli army claimed on Thursday that it struck more than 600 targets in the Gaza Strip since the start of its military operation, with the health authorities in the coastal enclave reporting 67 Palestinians dead, in the most heated exchanges since 2014.

According to Israel, it destroyed most of Hamas’ rocket manufacturing facilities.

On a night where more than 130 rockets rained down on Israel, sirens blared across border towns, and in central and southern Israel. In total, 1,160 rockets have been fired at Israel, leaving seven dead, including one five-year-old from Sderot.

Meanwhile, international travel to and from Israel has been severely disrupted, with commercial flights to Tel Aviv redirected to Eilat. Major airlines from Europe and the U.S. — including Delta, United, Lufthansa, Austrian Airlines and British Airways — have cancelled flights to Israel in light of the deteriorating security situation.

U.S. President Joe Biden spoke with Prime Minister Benjamin Netanyahu on Wednesday, and the White House announced that Deputy Assistant Secretary of State for Israel and Palestinian Affairs Hady Amr was headed to Israel “immediately” in a bid to deescalate tensions.

According to a White House readout of the call, Biden conveyed his “unwavering support for Israel’s security and for Israel’s legitimate right to defend itself and its people, while protecting civilians” and updated Netanyahu on American diplomatic engagement with countries including Egypt, Jordan and Qatar, as well as with Palestinian officials.

“Israel has a right to defend itself when you have thousands of rockets flying in your territory,” the president said later when asked about the fighting. “My hope is that we’ll see this coming to conclusions sooner than later.

“My national security staff and defense staff has been in constant contact with their counterparts in the Middle East, not just with the Israelis but also with everyone from the Egyptians to the Saudis to the Emiratis,” he said.

Biden also conveyed U.S. encouragement of a “pathway toward restoring a sustainable calm,” and that Jerusalem must be a place of peace.

Israel’s air force and artillery has continued to bombard the Strip, with Gaza health officials reporting 67 dead, including 17 minors, and a further 338 wounded.

The IDF said that the majority of the sites belonged to Hamas, and also reported the assassination of several major figures from the Islamist movement.

Clashes also continued between Jews and Arabs inside Israel, spreading from a deadly riot in Lod to other cities. In Lod, the police announced an 8 p.m. to 4 a.m. curfew, after more than 20 people were arrested, and about the same number injured. Residents hurled rocks from their windows at hundreds of Jewish protesters, who also clashed with the Israeli police.

“What happens in Israeli cities in recent days is intolerable,” he said. “We see Arab rioters setting synagogues and cars on fire, clash with officers and hurt innocent civilians.” There is no “justification for Arabs lynching Jews, or Jews lynching Arabs,” Netanyahu added.

Defense Minister Benny Gantz ordered on Thursday a “massive reinforcement” of Border Police forces in cities across Israel to “cool off” a wave of protests and violent attacks by civilians against both Jews and Arabs.

“We’re in an emergency,” Gantz said in a statement, ordering the recruitment of 10 reserve Border Police companies. He stressed “no IDF soldier should be involved in policing activities, which aren’t part of the IDF’s mission.”

In the northern mixed Arab-Jewish city of Acre, five Israeli Arabs attacked a 30-year-old Jewish man, who was seriously wounded and was evacuated to hospital. Before the incident, police instructed Arab shop owners to shut them in advance of the expected arrival of a group of right-wing extremists. Overnight, police also arrested a 25-year-old Acre resident for shooting toward police officers at the scene.

In the Tel Aviv suburb of Bat Yam, a mob of right-wing Jewish extremists pulled an Arab driver out of his car and severely beat him. The attack came as dozens of right-wing activists marched in the city and attacked a number of Arab-owned businesses, smashing glass windows and chanting racist slogans.

“The Israeli police will not allow public disturbances, violence and attempts to hurt officers,” the department said in a statement. “We will get to each and every one of the attackers who participated in this horrifying lynching.”

Bat Yam Mayor Tzvika Brot said that the rioters were not residents of the city and that events had been organized by “provocateurs who arrived from outside the city and came here to commit vandalism.”

On Wednesday, a meeting by the security cabinet ended with Netanyahu and other ministers unanimously agreeing that Israel will not yet accept a ceasefire and will continue military strikes in Gaza.