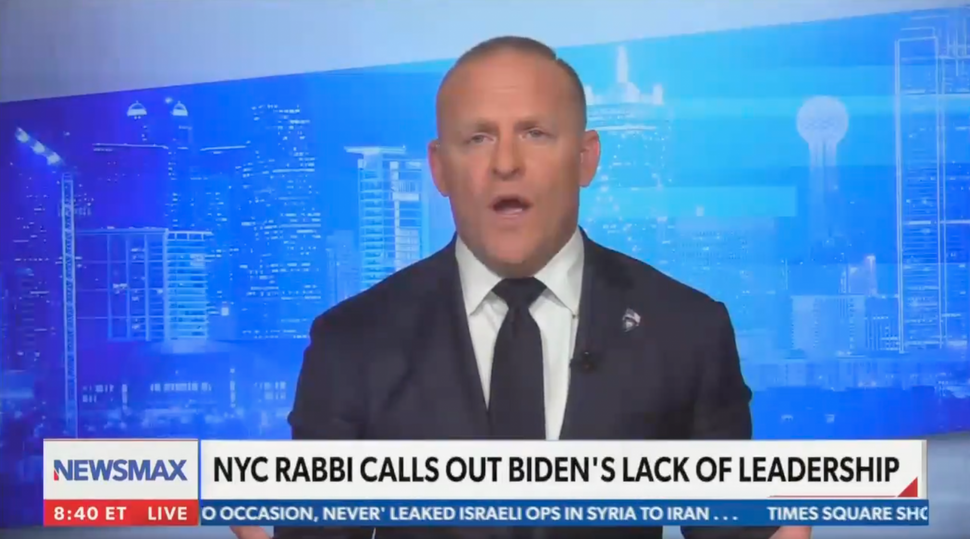 Newsmax says host Grant Stinchfield is on a previously scheduled vacation following his comments about Israel.

(JTA) — Newsmax host Grant Stinchfield will not host his weeknight primetime show for the rest of the week after calling Israel the “home country” of American Jews, according to Business Insider.

Stinchfield made the comments in a segment Tuesday night about continuing violence in Israel and Gaza.

A spokesperson for Newsmax told Insider that Stinchfield was off the air due to a previously scheduled vacation.

“If you are Jewish and you are a Democrat and you are living in America today, how do you support an administration that turns its back on your home country?” Stinchfield said.

Newsmax host: “If you are Jewish and you are a Democrat and you are living in America today, how do you support an administration that turns its back on your home country?” pic.twitter.com/yc9RjpHxlU

Stinchfield also criticized President Joe Biden for failing to speak out in support of Israel’s strikes on Gaza in retaliation for rockets launched by Hamas. Biden said Thursday that he had a “brief” conversation with Israeli Prime Minister Benjamin Netanyahu Wednesday and said “there has not been a significant overreaction [by Israel],” according to The Times of Israel.

Jake Tapper, the “State of the Union” host on CNN, criticized Stinchfield’s comments in a tweet Thursday.

“I don’t belong to any political party but I am Jewish and newsflash: my home country is the United States. To suggest otherwise is bigotry,” Tapper wrote.

Stinchfield responded in a quote tweet: “Hey @jaketapper your home country appears to be Disneyland! It’s the only way to explain your delusion about @joebiden and his sympathies for the terror group Hamas. And FYI I’m half Italian and yes I refer to Italy fondly as ‘The Home Country’.”

The post Newsmax host who called Israel ‘home country’ of American Jews is temporarily off the air appeared first on Jewish Telegraphic Agency.