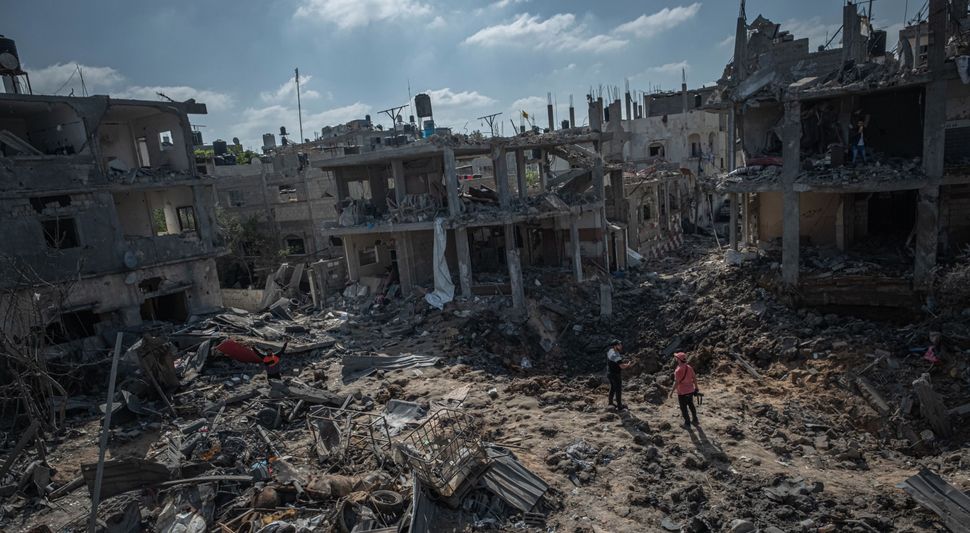 People inspect the damage done to Beit Hanoun after a night of Israeli raids on May 14, 2021 in Gaza City, Gaza. By Fatima Shbair/Getty Images

For live updates on the conflict from our partners at Haaretz, click here.

The intense battle between Israel and Palestinian militants in the Gaza Strip showed no signs of abating as it entered its second week, despite a United Nations Security Council meeting and other international diplomacy aimed at brokering a ceasefire.

Gaza health officials said nearly 200 people had been killed in the coastal territory since Israel began pounding it with airstrikes last Monday, about a quarter of them children. The Israeli military said that nearly 3,000 rockets had been launched from Gaza, a far higher number than in prior escalations, and including many more long-range missiles; at least 11 Israelis, including two children and a soldier, have been killed.

Prime Minister Benjamin Netanyahu suggested in a nationally televised speech on Sunday night that the fight was far from over. “our campaign against the terrorist organizations is continuing with full force,” he said from military headquarters in Tel Aviv. “We want to exact a price from the aggressor, as in all types of terrorism. To restore the quiet and security and to rebuild deterrence and governance will take time.”

Netanyahu defended Israel’s attack on a building that included the offices of the Associated Press, Al Jazeera and other media outlets, which had drawn criticism from international groups like the Committee to Protect Journalists.

The Israeli news organization Haaretz reported Monday that Israel had assassinated the northern commander of the Islamic Jihad, a senior leader of an extremist group that has joined Hamas in firing rockets into Israel. Earlier, Haaretz and other news outlets reported that Israel had hit the main coastal road near Gaza City and an important pipeline that ferries electricity from Gaza’s power plant as well as targeting underground tunnels Hamas uses to store weapons and shield leaders from attacks.

At the Security Council’s first public meeting about the escalation on Sunday, the U.N. Secretary General, Antonio Guterres, described the situation as “utterly appalling.” He said the U.N. was actively engaged in ceasefire talks and urged Israel and the Palestinians to let them “intensify and succeed.”

“Fighting must stop. It must stop immediately,” he said. “This latest round of violence only perpetuates the cycles of death, destruction and despair, and pushes farther to the horizon any hopes of coexistence and peace.”

Riyad al-Maliki, the Palestinian foreign minister, said countries — like the United States — that talk about Israel’s right to defend itself only “embolden” it “to continue murdering entire families in their sleep.” Gilad Erdan, Israel’s ambassador to the U.N., countered by saying, “Israel uses missiles to protects its children; Hamas uses children to protect its missiles.”