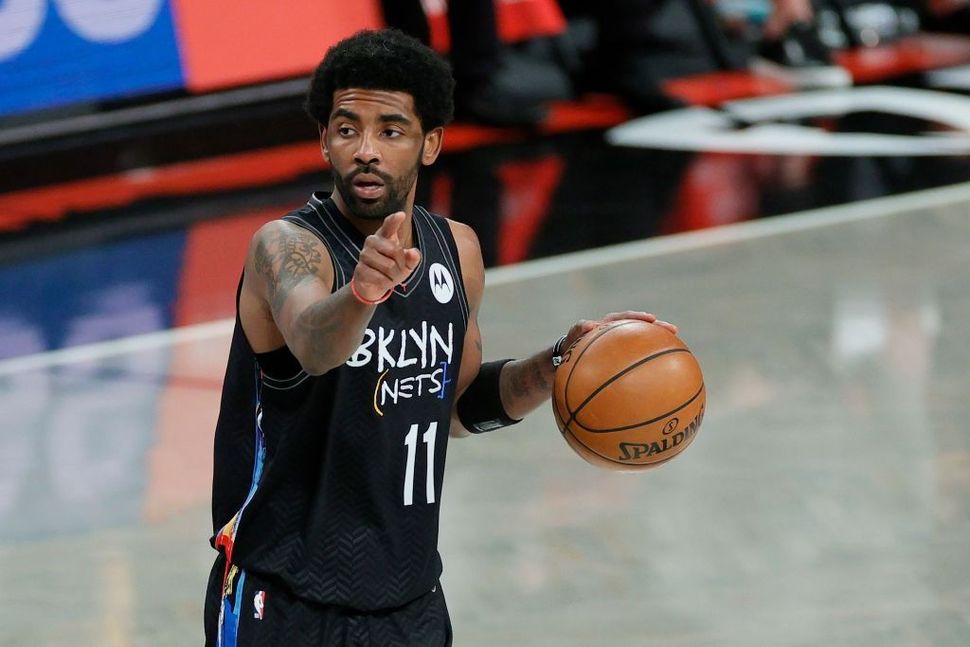 Kyrie Irving #11 of the Brooklyn Nets calls a play during the second half against the Chicago Bulls at Barclays Center on May 15, 2021. Photo by Sarah Stier / Getty Images

(JTA) — The Brooklyn Nets are about to embark on a playoff run that their fans hope can bring the team its first championship trophy in over 40 years.

But one of their key star players says his focus is elsewhere: the Israeli-Palestinian violence that is raging right now.

“I’m not going to lie to you guys, a lot of stuff is going on in this world, and basketball is just not the most important thing to me right now,” Kyrie Irving said at a postgame press conference on Saturday.

“I focus on this most of the time, 24/7, but it’s just too much going on in this world not to address. It’s just sad to see this s— going on. It’s not just in Palestine, not just in Israel. It’s all over the world, and I feel it. I’m very compassionate to it — to all races, all cultures and to see it, to see a lot of people being discriminated against, based on their religion, color of their skin, what they believe in. It’s just sad.”

The elite point guard, who is averaging over 27 points a game this season, revealed in April that he had recently committed to Islam. He has intensified his social media posting about political issues in recent months and fasted during the month of Ramadan this year.

“I don’t care which way you stand on — either side,” Irving added. “If you’re a human being, then you support the anti-war effort. There’s a lot of people losing their lives — children, a lot of babies, and that’s just what I’m focused on.”

The Nets have their highest championship hopes in decades, thanks to a trio of Irving and fellow star scorers Kevin Durant and James Harden.