Antisemitic harassment has roiled the streets of Miami and South Florida in the wake of the Israeli-Palestinian conflict.

The most alarming incident took place earlier this week in Bal Harbour, a small, wealthy municipality in northern Miami Beach. According to a report on Ch. 10, the local ABC affiliate, four men shouted hateful slogans and threw garbage at Eric Orgen, his wife and 16-year-old daughter as they left a synagogue. 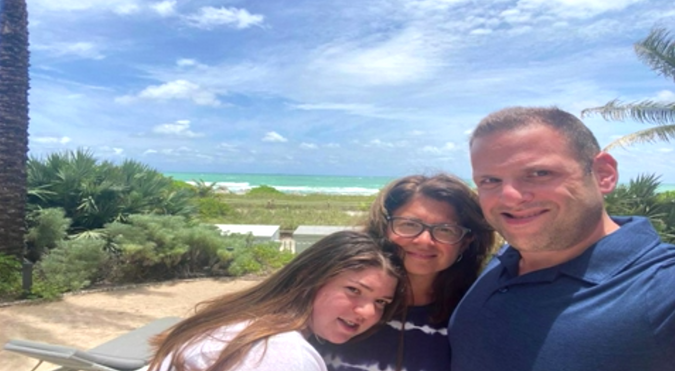 Eric Orgen, his wife and 16-year-old daughter were attacked in Bal Harbour as they left a synagogue. Courtesy of Local10ABC

The men, who looked like they were in their 20’s and were in a white sport utility vehicle, yelled “Free Palestine!” “[Expletive] the Jews!” “Die Jew!” and threatened to rape Orgen’s wife and daughter, according to the report. The family were visiting Miami from New Jersey.

“Acts of hate & violence against any community are not tolerated in Miami-Dade. Hate & intolerance contradict the foundations of our community – a place where so many generations of people found a safe home after fleeing their own countries to build a new life with their families. As a member of the Jewish community and the first Jewish Mayor of Miami-Dade, acts of antisemitism cut especially close to home. They also deepen my commitment to ensure our County remains a place where all people are welcome and respected, regardless of their faith.”

Acts of hate & violence against any community are not tolerated in Miami-Dade. Hate & intolerance contradict the foundations of our community – a place where so many generations of people found a safe home after fleeing their own countries to build a new life with their families.

On May 14, Miami police arrested Joseph Bounds, part of a roving antisemitic band seen driving a van covered with hate slogans at locations around South Florida, according to the Miami Herald and another Ch. 10 report. The hate group was filmed by Todd Amelung-Wilson in the Miami neighborhood of Silver Bluff earlier that day giving Nazi salutes, next to a van covered with swastikas and hate slogans like “Jews killed Jesus,” “Jews are not white,” “vax the Jews,” and “open border for Israel” in a video that was widely shared on social media.

“To see actual Nazis gleefully writing on their presumably rented van was just shocking,” Amelung-Wilson told the Herald. “They seemed pretty proud of themselves. … We were really shaken.”

Miami police arrested Bounds later that day for refusing to obey police orders during a traffic stop, according to the Herald and Ch. 10. Officials said Bounds and his group are called the Goyim Defense League, identified by the ADL as a national neo-Nazi group.

Their van was recorded earlier that week flying antisemitic banners in Dania Beach, a Jewish neighborhood in Broward County. On May 13, their van was filmed driving in a pro-Israel rally in Boca Raton in Palm Beach County, another prosperous neighborhood with many Jews, waving a Palestinian flag, their van painted with still more hate slogans including “Hitler was right.”

“We rally for peace and this van filled with hate, call for genocide and threats kept circling,” Rabbi Efrem Goldberg, who filmed the neo-Nazis in Boca, wrote on Twitter. “Hard to believe in the heart of Boca Raton if didn’t see it myself.”

Jared Holt, a domestic extremism fellow at the Atlantic Council, tweeted that former Proud Boy “Jovi Val” (Jovanni Valle) was inside the van at the Boca rally.

Yesterday, a group of neo-Nazis covered a van in window paint and hurled anti-Semitic hate at a pro-Israel rally in Boca Raton, Florida. The group streamed their stunt to a white supremacist video site. Inside was a hate group that includes ex-Proud Boy “Jovi Val” (Jovanni Valle) https://t.co/BQRv4DQwGo pic.twitter.com/AEuHmg9o0i

The ADL lists the group as a national antisemitic extremist network that stages stunts to troll and harass Jews, with thousands of online followers and a video platform for antisemitic content; its most visible members are based in California, Colorado, Florida and New York.

Bounds was released from jail the day after his arrest, wearing a mask printed with the antisemitic “Happy Merchant” meme as he talked to the media.

The incidents are the latest to mark a rise in antisemitism in Miami and around Florida. A Forward story in April outlined the growth in antisemitism in right-wing Hispanic political and media circles in Miami, and another in March documented antisemitic comments from Miami politicians. Last month a man was arrested for writing graffiti, including “communism is judiasm” and “Zionism is Satanism” on the eve of Passover and Holocaust Remembrance Day.

Antisemitic incidents in Florida rose 40% from 2019 to 2020, according to the ADL’s just released audit of antisemitism in the U.S., with more taking place in Miami-Dade than any other county in the state.