Most ominously in this city filled with Cubans and other Latin Americans who fled communist governments, was this one: “Communism is Judaism.” 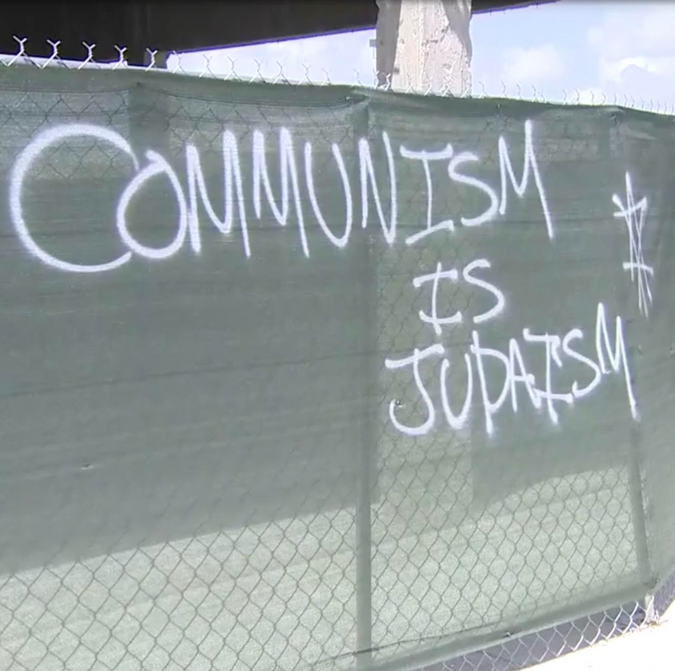 The phrase echoed a trend towards antisemitism in Miami’s right-wing Hispanic political circles that have come to dominate this bellwether city:

•In 2018 Miami-based Radio Television Marti, the federally funded broadcaster of anti-Communist messaging to Cuba, ran a report blaming Soros for orchestrating the 2008 financial collapse, and supporting narco-terrorism and Cuban schemes. Multiple staffers were fired when the report was exposed and denounced as antisemitic in 2019.

•Last October a group of over 150 parents, including Vince Lago, the recently-elected mayor of the prosperous municipality of Coral Gables, the former speaker of the Florida House, and other prominent figures, sent a letter to an elite private Catholic girls school, castigating it for launching an anti-racism program in response to numerous reports of racism among students and faculty. The letter cited the malign influence of “Cultural Marxism” and the Frankfurt School, parroting a conspiracy theory that blames progressive U.S. social and racial justice movements on German Jewish scholars who fled the Nazis. 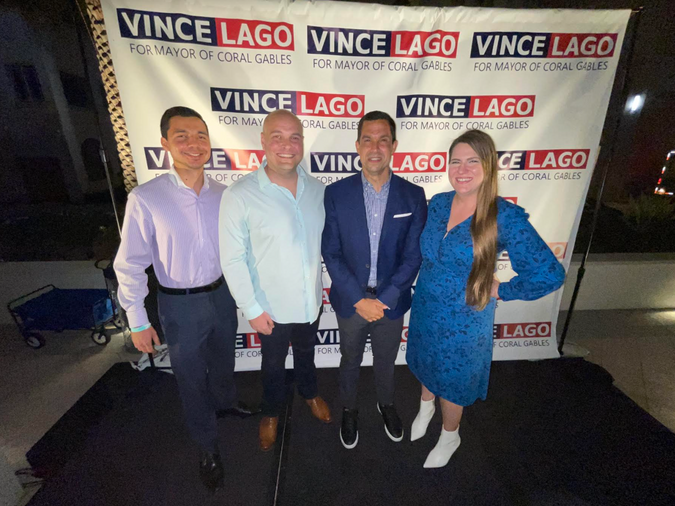 Vince Lago (second from the right, in blue suit) Courtesy of Twitter

•In March, Miami Cuban-American commissioner Joe Carollo derided a Jewish filmmaker during a public city meeting by mocking his name, while his fellow commissioners snickered.

This shift toward insinuating Jews-as-communists arises from an intensive and successful branding of Democrats as socialists that has come to dominate Republican Hispanic political circles and messaging in South Florida. Conservative Hispanics drove a shift towards former President Donald Trump and Republicans in Miami-Dade in the 2020 election, helping him win Florida and electing right-wing Cubans to national and state office.

Jews, along with Blacks and various progressive groups, are increasingly portrayed as part of a broad leftist threat. 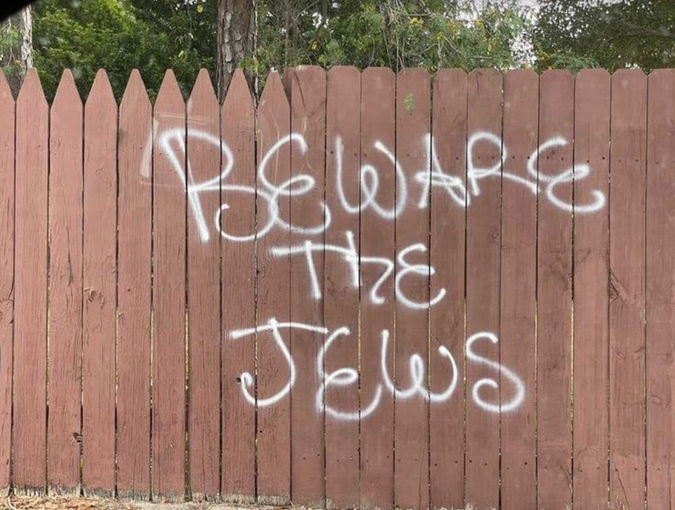 Graffiti in Miami, “Beware the Jews”

In a city filled with immigrants who fled socialism in Cuba, Nicaragua, Colombia and Venezuela, identifying Jews with menacing socialist, anti-American forces is a potent, and potentially dangerous, tactic.

In the case of the recent graffiti, the alleged perpetrator, Benjamin Michael Garcia, 30, was apprehended and charged with vandalism and criminal mischief, but his motives remain unknown. 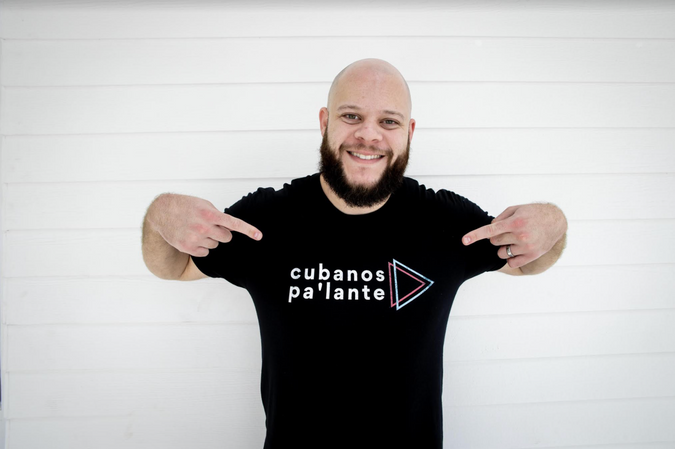 But Rivero says he frequently encountered “Jews are communists” and other antisemitic posts in conservative Cuban social media groups during 2020, as well as death threats from Trump supporters. “What I started seeing was the Trump, the Republican campaign focused on tapping into the trauma our community has suffered about communism.”

Antisemitism rose across the U.S. during the Trump administration. But the insular nature of Miami’s Hispanic community, particularly among a conservative Cuban faction that has reversed a years-long moderating trend to become politically dominant again, appears to be magnifying that tilt here, while making it more acceptable for leaders to ignore or even encourage the slide towards prejudice.

No politician condemned the antisemitic graffiti. The signatories on the Catholic school letter, which was covered by the Miami Herald and the Miami New Times, defended their calls to abandon teaching about racism.

“The idea that equality and racial equity are rooted in a socialist Jewish group – that’s ridiculous,” said Billy Corben, the Jewish filmmaker lambasted by the Miami commissioner, who first exposed the letter on Twitter. “You cannot minimize the impact of these very powerful and influential policy makers who have signed this letter.” 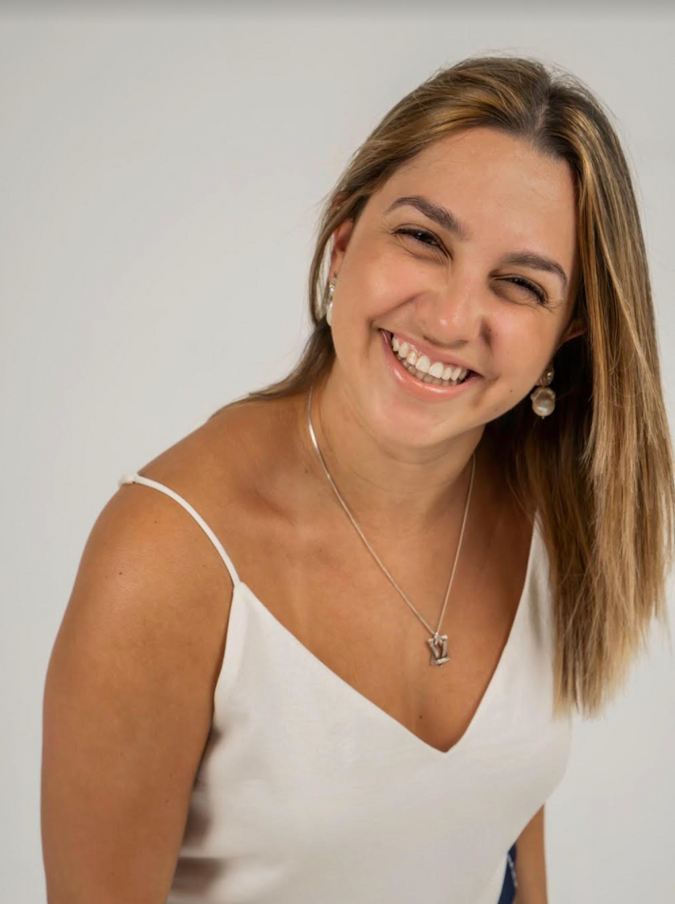 Jessica Landsberg, a young political operative who has worked on several local campaigns, and whose father is Jewish and mother is Cuban, was disturbed by the “communism is judiasm” and other anti-Semitic graffiti – and frustrated no one denounced it.

“That there’s no conversation that long after the Holocaust antisemitism is alive in a city with one of the largest Jewish populations is disappointing,” said Landsberg, 23. “The graffiti is just the latest thing. I’ve been repeating for the last few years that antisemitism is not just alive but on the rise.” 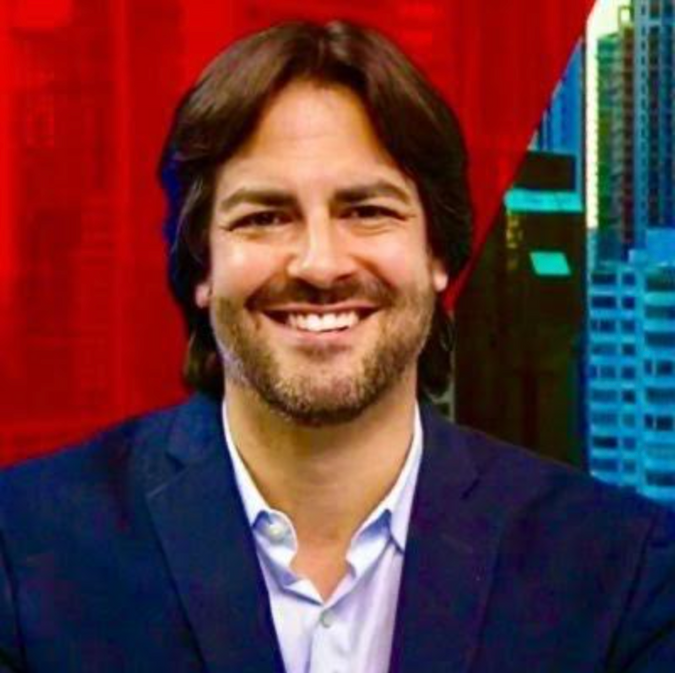 “It’s the weaponization of antisemitism,” said Amandi, whose firm has studied Florida Hispanics’ attitudes towards Jews. “Sublimated feelings of discrimination and prejudice that by and large were more dormant have now risen to the surface.”

He said he has seen an increase in the labeling of Jews as socialists, and in the old tropes that Jews are a powerful behind-the-scenes cabal.

“There’s this saying ‘esta en la sopa tambien’ – they’re in the soup too,” Amandi said. “The Jews are always in the soup of every negative thing – socialists, pedophiles, Wall Street, Hollywood, landlords. Things people would not have said 20 years ago they’re saying openly now.”

Jose Smith, 71, a self-described Jewban – a term for Jewish Cuban he helped invent – has experienced that discrimination all his life. Smith, who was 11 when his family left Havana for Miami in 1961, and became a two-term commissioner and then attorney for the City of Miami Beach, is blunt about what he says are the derogatory attitudes of some of his countrymen.

“I lived in Cuba with antisemitism,” said Smith, who recalled children throwing rocks at him at a Jewish community center. “Coming to the United States I saw it every day with many segments of the Cuban community. They will tolerate Jews but they will not consider them equal.”

When Smith was campaigning, Cuban talk radio and political tabloids commented on his Jewishness, labeling him “El Judio.” When he told elderly Hispanic and Cuban voters he was a Democrat, they’d say “he’s probably Jewish.”

“Cubans associate Jews with socialist ideas,” said Smith. “The notion that Jews are more liberal, more socially conscious, participated in the civil rights movement – these issues are anathema to what the right-wing dinosaurs in the Cuban community believe.”

“It’s all part of the same platform – they’re not like us.” 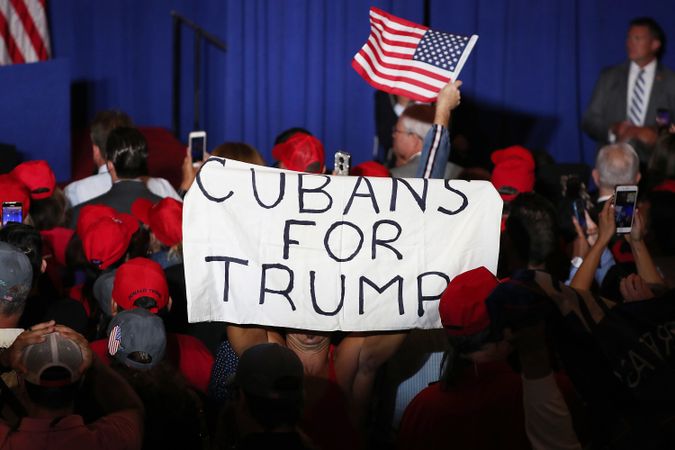 Some studies have found a tendency towards antisemitism in heavily Catholic and Evangelical Latin America, source of a stream of immigrants to Miami who stay connected to their home cultures.

A 2016 ADL survey found that foreign-born Hispanic immigrants were the most antisemitic of all U.S. demographic groups, with 31% having antisemitic attitudes, followed by native-born Hispanics at 19%. A 2017 online survey by Lifeway Research found that 42% of Catholic or Protestant Hispanics thought Jews had too much influence in American society.

And the ADL’s just released audit of antisemitism in the U.S. in 2020 showed a 40% rise in antisemitic incidents in Florida, up from 91 in 2019 to 127 last year, and the most in the past four years. Twenty-seven incidents were in Miami-Dade, more than any other county in the state. Nationally, such incidents declined by 4%.

The close-knit nature of the Cuban immigrant community, a major factor in its success, has reinforced the return of these prejudices among certain circles, said Lisandro Perez, Havana-born, Miami-raised chair of the Department of Latin American and Latina/o Studies at the City University of New York.

“Latinos in Miami, particularly Cubans, live in a self-contained community in which they don’t have a lot of contact outside,” said Perez. “You tend to stay among your own. That reinforces the culture of origin, and if that culture has certain tendencies, they get magnified.” 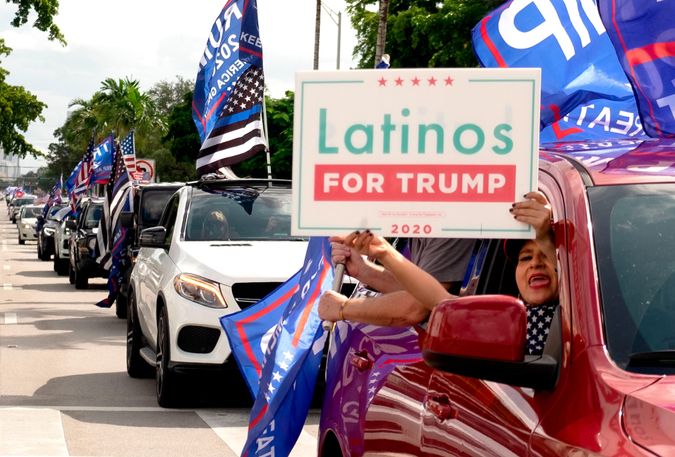 Hundreds of cars participated October 10, 2020 in the anticommunist caravan organized by Cuban exiles in Miami. Image by GASTON DE CARDENAS/AFP via Getty Images)

Perez said Cubans who identify as political exiles, rather than immigrants seeking opportunity, sometimes blame others who don’t support their unsuccessful cause of changing their homeland. “There is this idea of loss, and a sense that you have been victimized,” Perez said. “There is that element of resentment that focuses on scapegoating others, finding enemies. Blacks, Jews, those leftists. This whole demented theory of the world-wide Jewish conspiracy.”

The antisemitic messaging to Hispanics extends far beyond Miami. Leah Soibel, founder and chief executive officer of Fuente Latina, a Miami-based non-profit which works with Spanish language media on news of Israel and the Jewish world, said they’ve recently seen “a huge rise in disinformation” in Spanish, filled with anti-American, anti-Israel, and antisemitic messages, spreading from Latin America to the U.S.

Sources include HispanTV, funded by the Iranian government – with a correspondent in Miami – Russia Today in Spanish, the Venezuelan government-backed Telesur, and the QAnon-like Argentine online outlet TLV1. 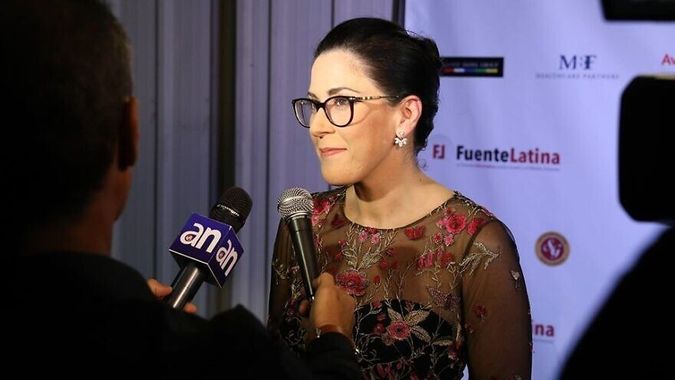 “There is definitely a concerted effort by political actors on the extreme left and extreme right in the Hispanic world,” said Soibel. “They’re trying to drive a wedge between the Jewish and the Hispanic community.”

Immigrants from places like Cuba and Venezuela, like immigrants everywhere, turn to their national communities for help with their new life. Eager to fit in, they tend to enthusiastically join the politics of their new home.

“They want to prove they’re not a communist, so they adopt even more extreme stances,” said Amandi. 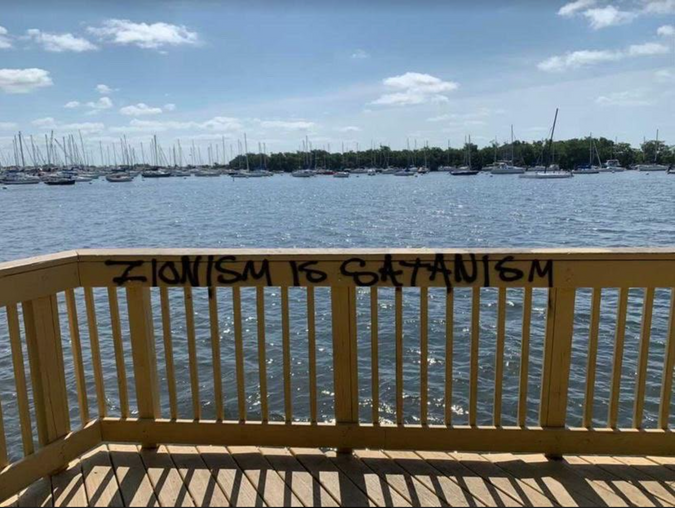 Graffiti messages scrawled around Miami in March, on the eve of Passover and Holocaust Remembrance Day, “Zionism is Satanism”

Perez and Soibel emphasize that they do not believe most of Miami’s Hispanics are antisemitic. But because Hispanics, and Cubans in particular, dominate politics in Miami-Dade and are so influential in Florida, and in U.S. foreign policy in Latin America, a shift in attitude towards Jews here has the potential for much wider influence.

That worries those who fear not only what the shift means for Jews, but for the city as a whole.

“There’s been a huge divide even in our families created by this propaganda machine,” said Rivero, the Cuban-American progressive activist. “It’s tearing our community apart.”