Running out of lethal injection drugs, Arizona turns to Zyklon B 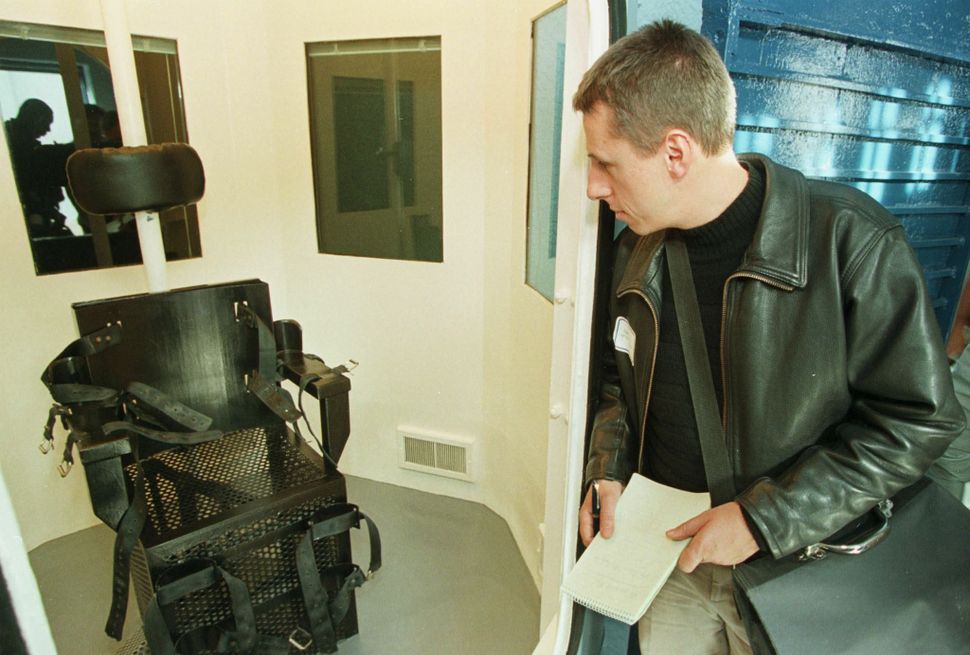 A German reporter views the gas chamber where inmates condemned to death are executed inside the “Death House” at the main prison complex in Florence, some 80 miles southeast of Phoenix. Image by Getty Images

In a push to restart its execution program, the state of Arizona is dusting off its gas chamber and stocking up on hydrogen cyanide gas, a compound better known by the name the Nazis called it when they used it at Auschwitz — Zyklon B.

According to documents found by the UK-based Guardian, the state bought a $1,350 brick of potassium-cyanide — necessary to create the gas — in December and refurbished the gas chamber which was built in 1949 and has been out of use for the past 22 years.

Executions had been paused in the state since it botched a lethal injection in 2014. Since 2011, the European Union has banned the export of Sodium thiopental, one of the main drugs used in lethal injections, leading to dwindling supplies in the U.S.

The chamber is housed at ASPC-Florence, one of the state’s flagship prisons. Arizona’s last execution was of German national Walter LeGrand In 1999, who was convicted of killing a man in an armed robbery. According to an eyewitness account published by the Tucson Citizen, he took an agonizing 18 minutes to die, gagging and gasping for air throughout.

Arizona has some 115 inmates on death row. The state has selected two 65-year-olds as potential candidates for the first to use the refurbished chamber – Frank Atwood, who was sentenced to death for killing an eight-year-old girl in 1984 and Clarence Dixon, convicted of the 1978 murder of a college student.

The Zyklon family of chemicals were first invented by a German-Jewish chemist, Fritz Haber, to be used as pesticide. However, its weaponization in World War I earned him the moniker “Father of Chemical Warfare.”

Haber died in 1934, on his way to Palestine after being recruited by Chaim Weizmann to lead the Sieff Research Institute in Rehovot, today known as the Weizmann Institute.

Less than a decade later, the compound he helped create would be used to kill millions of European Jews.

Running out of lethal injection drugs, Arizona turns to Zyklon B