Dozens of rabbis, professors and well-known activists were among 300 progressive Jewish leaders who released a statement Wednesday pushing back against the suggestion that pro-Palestinian activism was behind the recent spate of antisemitic incidents in the United States.

“Supporters of the Israeli government — including some in the American Jewish establishment — are misrepresenting fringe and widely-condemned acts of individual antisemitism as characteristic of the broader Palestinian human rights movement,” the statement read in part. 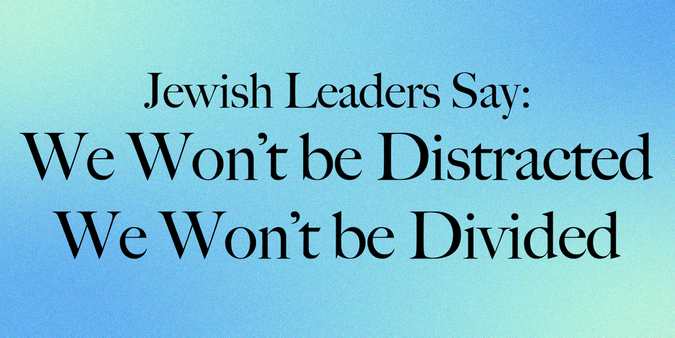 A graphic created to accompany a statement by more than 300 progressive Jewish leaders criticizing attempts to brand Palestinian activism as antisemitic. Courtesy of Jewish Leaders

The document condemned “attacks on members of our Jewish community” and stated that blaming all Jews for Israel’s actions was antisemitic. But most of the statement emphasized solidarity with Palestinians and it declared that “Palestinian liberation and dismantling antisemitism are intertwined … The grassroots Palestinian freedom movement is concerned with the liberation of all people and dismantling all forms of oppression.”

It was signed by Rabbi Elyse Wechterman, director of the Reconstructionist Rabbinical Association, and a number of other progressive clergy as well as a activists like Ady Barkan and Heather Booth, and leaders affiliated with J Street, Bend the Arc, Americans for Peace Now, IfNotNow, Jewish Voice for Peace and Jews for Racial and Economic Justice.

Michael Chabon and Ayelet Waldman, the Jewish authors and married couple, also signed on, as did a number of journalists including Kate Aronoff, who runs a popular newsletter about climate change, Eric Levitz of New York Magazine and David Zirin, sports editor for The Nation.

The statement comes as an American Jewish community that is deeply divided over how to define antisemitism responds to an alarming series of violent street attacks on Jews and vandalism against Jewish institutions last month. The incidents largely occurred during fighting between Israel and Hamas in Gaza and many in the pro-Israel camp attributed the violence to a large series of protests held against Israel in cities across the country in mid-May.

Progressives have rejected those claims and the statement details their argument.

“For decades, the organizations and activists leading the Palestinian freedom movement have been resoundingly clear that antisemitism has no place in the movement,” it states. “When fringe antisemitic events occur, they are swiftly and roundly condemned by movement leadership.”

With that in mind, the signatories argue, it is unacceptable to brand the wider movement as antisemitic. The statement also condemns “anti-Palestinian racism, so often unreported and unacknowledged in our communities.”

Many leaders from the Jewish establishment have decried these kind of statements in response to antisemitism, saying that it is offensive to throw in condemnations of other forms of racism when speaking out against anti-Jewish bigotry.

But those concerns have gone both ways, with Palestinian students at Rutgers expressing anger last week after the university released a statement opposing antisemitism. Administration officials quickly apologized for failing to support Palestinians within the university.

The Wednesday statement drew some of the same individuals who signed a March open letter organized by IfNotNow that called on President Joe Biden to name an antisemitism envoy who held an expansive view of what constituted antisemitism, and a May statement from several dozen scholars of Jewish and Israel studies that condemned “unjust, enduring, and unsustainable systems of Jewish supremacy, ethnonational segregation, discrimination, and violence against Palestinians.”