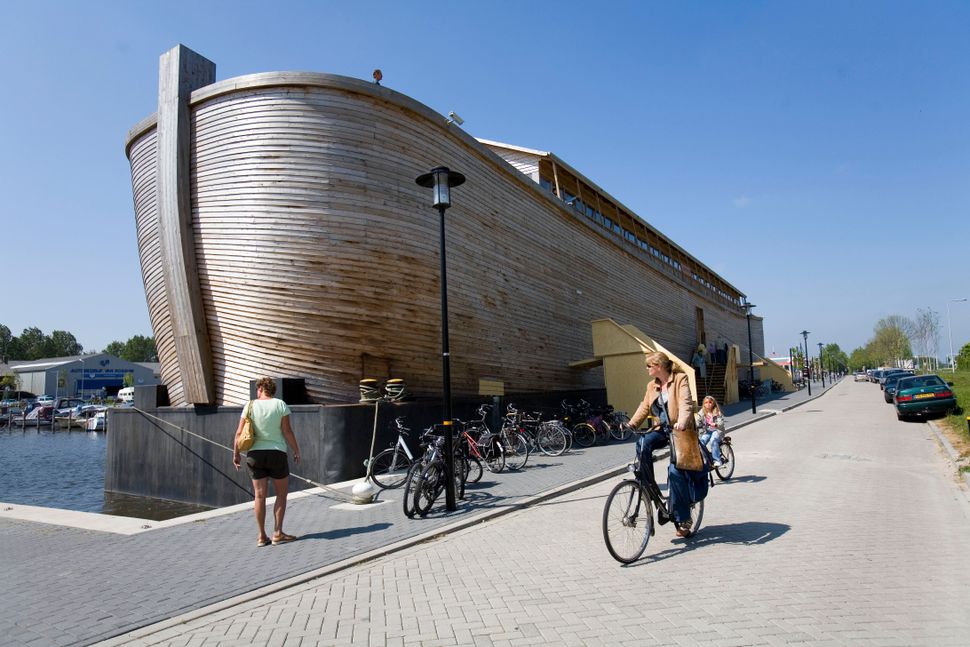 The 70 metres long replica of the biblical Noah’s Arc in 2007 in Schagen, Netherlands. By Michel Porro/Getty Images

Noah’s Ark is in hot water: the biblical version’s 21st century replica was detained by British maritime authorities who deemed it unseaworthy to be towed from Ipswich, England back to the Netherlands.

Aad Peters, a Ditch television and theater producer, is the current owner of the ark – a floating museum of Bible exhibits. The United Kingdom Maritime and Coastguard Agency (MCA) impounded the vessel, which has been stuck at the port of Ipswich for 18 months. Peters is facing fines of about $700 per day.

“The vessel, Noah’s Ark, will remain detained until all the deficiencies have been put right and a MCA surveyor is invited to check they’ve been corrected,” a MCA spokesman said.

The ark, towering at 21,528-square-feet with four floors, was built on a steel barge and has no engine, requiring towage to move. It previously traveled to Denmark, Germany and Norway prior to its stay in Ipswich, where it has been docked since October 2019. According to its website, the exhibition of carved wooden sculptures, which depict scenes like Adam and Eve and David and Goliath, has had more than half a million visitors. 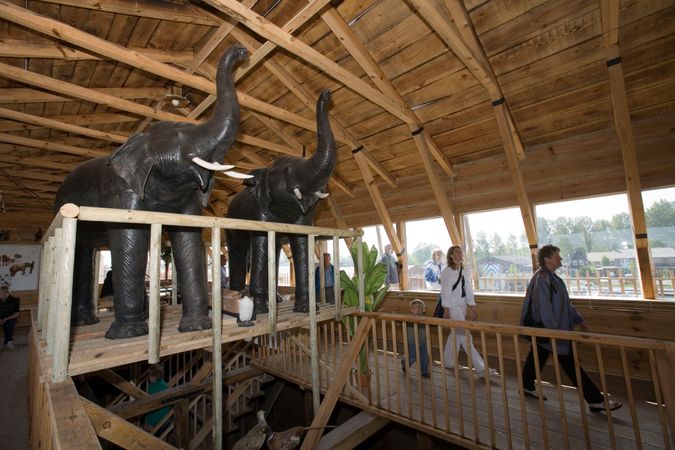 The floating exhibition of carved wooden sculptures depicts scenes from the Bible. By Michel Porro/Getty Images

The museum argued that the vessel was classified as a “non certified floating object” by Dutch authorities and therefore didn’t have to comply with international regulations. But because Peters did not register the ark, British officials cannot grant an exemption from the Dutch government to allow the ship to travel back to Holland.

Documents obtained by a local newspaper discovered that the MCA ruled the ark can’t be released until it has proper paperwork to meet antifouling laws and obtains a load line certificate, the former ensuring the vessel doesn’t have coating or surface treatment that would harm sea life and the latter a certification for boats to safely sink into the water under different conditions.

Emails reviewed by the local newspaper, the Ipswich Star, revealed coast guard bosses had “serious concerns” over the vessel’s condition.

“We do have concerns about this vessel and we cannot rely on the grace of God that it can be safely towed to Holland,” the emails read.

With owners wanting the ship to leave and the Coast Guard refusing to release it, the vessel is in an “impossible stalemate” between British and Dutch authorities, with UK Secretary of State for Transport Grant Shapps asked to intervene.

“We are aware of the situation and are in discussions with relevant agencies in the U.K. and the Netherlands,” the Dutch Department for Transport said. “Safety remains the top priority.’’

In 2015, after the ark was towed to Norway, Peters was asked in an interview if the vessel could survive a flood of Biblical proportions. Peters said the ark couldn’t handle intense waters.

“Sadly, no. I don’t like to use the word ‘miracle,’ but it is a miracle that we got to Norway.”