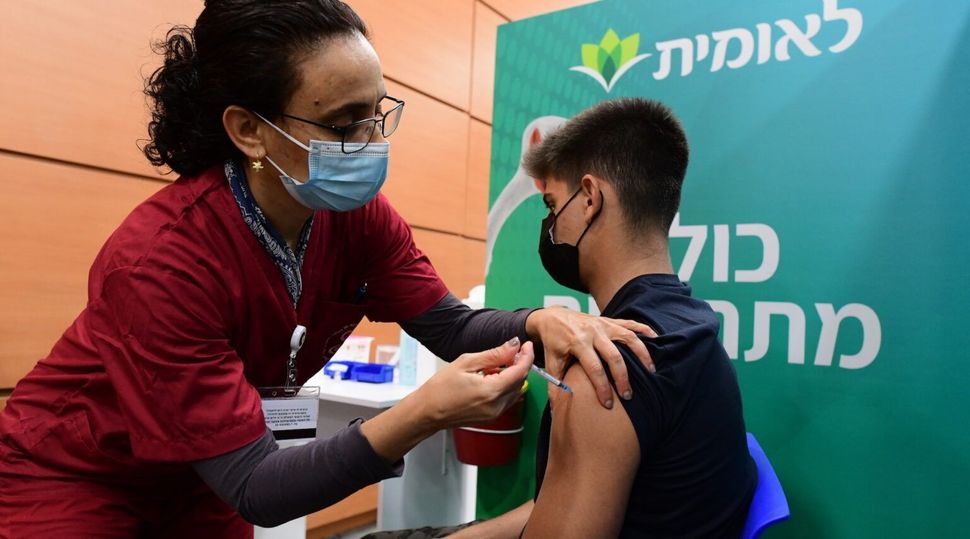 An Israeli student receives a COVID-19 vaccine injection at a vaccination center in Tel Aviv, Jan. 23, 2021. Photo by Avshalom Sassoni/Flash90

(JTA) — The Palestinian Authority canceled a deal that would have seen Israel give it one million COVID vaccine doses in exchange for a later shipment.

The P.A. made the move because many of the doses were set to expire in the coming weeks, according to Haaretz. By time Palestinian Health Minister Mai al-Kaila announced the cancelation, 100,000 of the doses had already been delivered.

The decision, made Thursday by Health Minister Nitzan Horowitz and approved by Naftali Bennett, the prime minister, constituted a change of Israeli policy following months during which Israel was criticized for not helping Palestinians get vaccinated. Israel led the world in inoculating its population, and its vaccination rates have slowed recently after most of the population has been vaccinated and case rates have plummeted.

In return for the shipments, the Palestinian Authority was to send Israel shipments of Pfizer doses it is set to receive in the future. The deal had been initiated by the previous Israeli government, which was in power through last week, but details had not been worked out. It was finalized by the new coalition before it was nixed.

“The coronavirus knows no borders,” said Horowitz, the chair of the left-wing Meretz party, according to Haaretz, when the deal was still in effect. “This important step is in the interest of all parties. I hope that it will set in motion a collaboration between Israel and its Palestinian neighbors in other areas as well.”

The U.S. State Department had already praised the agreement by early Friday afternoon.

“The United States welcomes cooperation between Israel and the Palestinian Authority to provide over 1 million COVID-19 vaccines to the Palestinian people,” spokesman Ned Price tweeted.

Human rights organizations criticized Israel for not immediately providing large amounts of vaccines to Palestinians in the West Bank and Gaza after it received its early Pfizer supplies. Critics said that Israel, as the occupying power of the West Bank, has a responsibility to vaccinate the territory’s residents regardless of nationality.

Israel has countered that prior agreements with Palestinian officials gave Palestinian agencies responsibility for healthcare.