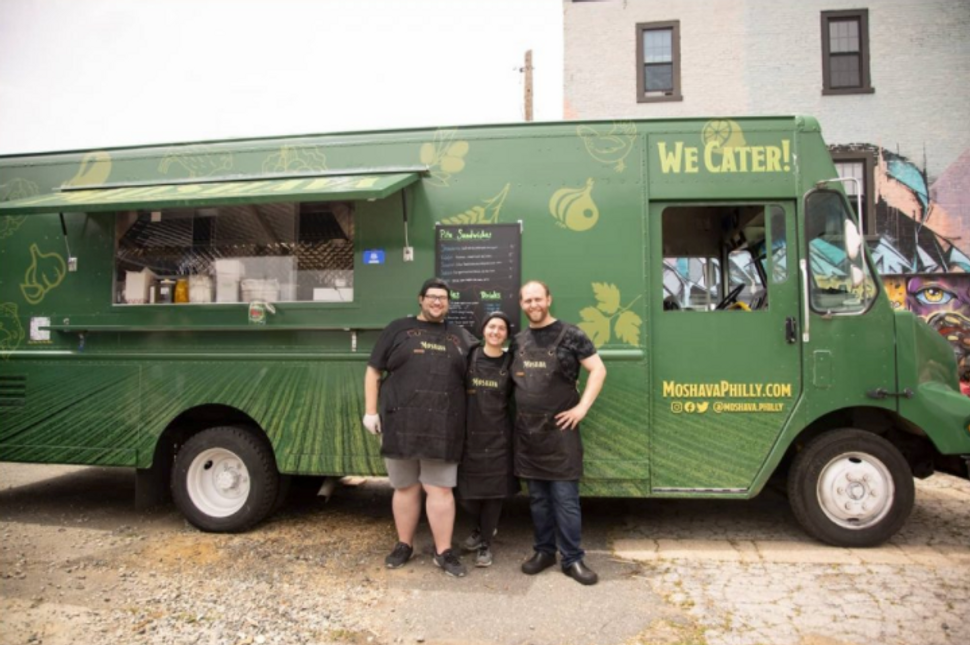 A Philadelphia food festival was abruptly canceled on Sunday, after its organizers’ decision to disinvite a food truck that services Israeli food prompted a major social-media backlash accusing them of antisemitism.

The festival, titled “A Taste of Home,” was intended to celebrate “diversity through food,” according to its organizers, a group called “Eat Up the Borders” whose stated mission is to “help promote small, family or immigrant-owned businesses.”

But around the time the event was scheduled to start, the group announced it had been canceled. Earlier on Sunday, Eat Up the Borders had taken down its Instagram page, which was flooded with more than 4,000 comments complaining that the food truck, which is called Moshava and serves Israeli street food like felafel and shawarma, had been removed from the roster. The outrage spanned social-media platforms.

“Horrific discrimination against Jews in Philadelphia,” the group StopAntisemitism.org wrote on Facebook in a post that drew hundreds of comments and shares. “Are we living in 1938 or 2021?”

On Twitter, the account @israellycool asked: “Do you think #EatUpTheBorders would expel an Asian food truck if there were threats, or do you think they would either a) cancel the entire event or b) hire security? I think you know the answer.”

The owner and chef of Moshava is Nir Sheynfeld, who is originally from Even Yehuda, Israel. He once worked at Zahav, Michael Solomonov’s famous Israeli restaurant in Philadelphia, and said in a phone interview that he had actually timed the truck’s grand opening a month ago to a prior event run by Eat Up the Borders, and was notified of the cancellation on Thursday.

“They heard rumors of a protest forming against us being there because we are Israeli,” he said. “They felt like it was the best move for the safety of their guests by removing us even though we’ve been booked for months. I guess they were getting calls from people and they were scared and didn’t want to put their guests in danger. We felt hurt and disappointed, but I’m not angry.”

Eat Up the Borders did not say which of the nine scheduled vendors were being removed when it announced the decision via Instagram on Saturday. Representatives of the group could not be reached on Sunday.

“In order to provide the best experience to all, we decided to remove one of our food vendors from Sunday’s event,” the Instagram post said. “This decision came from listening to the concerns of community that we love and serve. Our intent is never to cause any harm. We’re sorry, and we realize being more educated is the first step in preventing that from happening again.”

Sheynfeld, 33, said he had worked with one of the organizers at a Lebanese restaurant and that “she is a very sweet woman,” adding: “What happened is unfortunate, but they’re not antisemitic or malicious.” He said he did not think people should boycott the event.

“I would actually tell people to go and enjoy,” he added. “There are hard-working immigrants that will be there and they shouldn’t suffer because we’re not there.”

Sheynfeld said he had planned to give half the proceeds from Sunday’s event to the family of the late Pedro Salazar, who also worked at Zahav with Solomonov, the celebrity Israeli chef who has won a James Beard and other prestigious awards. (Solomonov was honored at the Forward’s 2019 gala).

Reached by phone over the weekend, Solomonov said canceling Moshava from the festival “was a mistake.”

“Nir makes great food and Moshava will be a hit,” Solomonov said. “The fact that a guy opens a food truck and just a month in, he is willing to give half his proceeds to a worker from my restaurant, that tells you all you need to know about Nir’s character.”

Of Salazar, Solomonov added: “I don’t ever remember him ever not having a smile on his face. He was the hardest worker and the nicest guy. He only took off Tuesdays to be with his daughter when she did ballet.”

Elan Kornblum, President of Great Kosher Restaurants Media Group said this is the first time he’s ever heard of an Israeli food vendor being invited and then being told not to come to an event due to reported security issues.

Sheynfeld, the Moshava food truck owner, told the Forward that the organizers apologized to him and that he would consider working with them in the future.

Alan Zeitlin is a freelance writer.