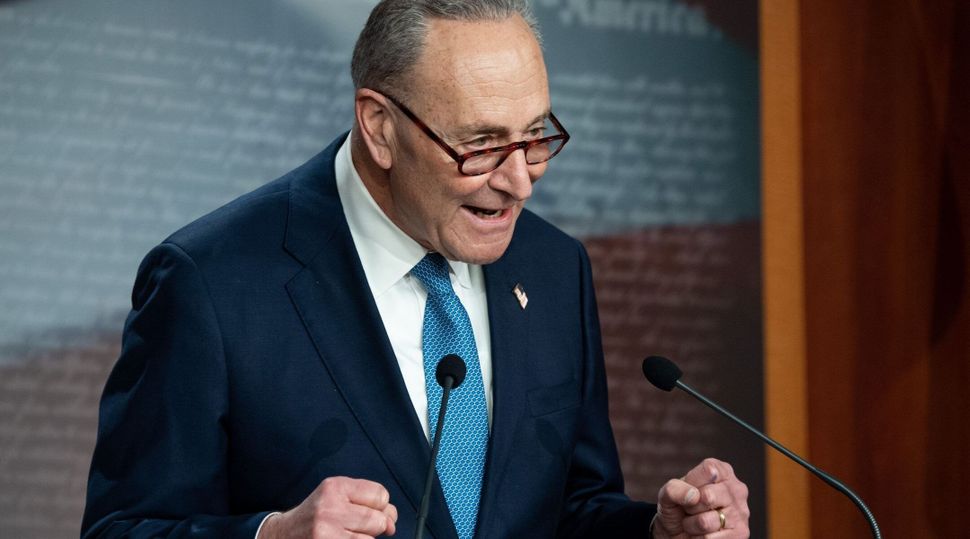 Sen. Chuck Schumer speaks at a news conference at the Capitol in Washington, D.C., Jan. 6, 2021. Photo by Saul Loeb/AFP via Getty Images

Schumer, who is Jewish, wrote to Britain’s U.S. ambassador, Karen Pierce, on Wednesday asking her government to prevent medical authorities from making any irreversible moves concerning Alta Fixsler, who has been on life support in a Manchester hospital since her birth due to natal complications.

“I urge that all health decisions that are against the wishes of the family be suspended until the citizenship process is complete and Alta can travel to the U.S. with her U.S. citizen father, Mr. Abraham Fixsler,” Schumer, a New York Democrat, wrote.

Last month, a British supreme court ruled against the family’s petition to have Alta moved to Israel after medical authorities’ decided to pull the plug on the machines keeping her alive. Taking Alta off life support goes against their religious beliefs, the haredi Orthodox parents said, and there may be hope for Alta recovering. Medical personnel expected Alta to die within days of being born.

The action has been delayed amid further appeals by the parents.

Israel’s government has also urged the British authorities to prevent Alta from being taken off life support and want the family to be permitted to move to Israel.

The United States is widely seen as the United Kingdom’s most important ally.