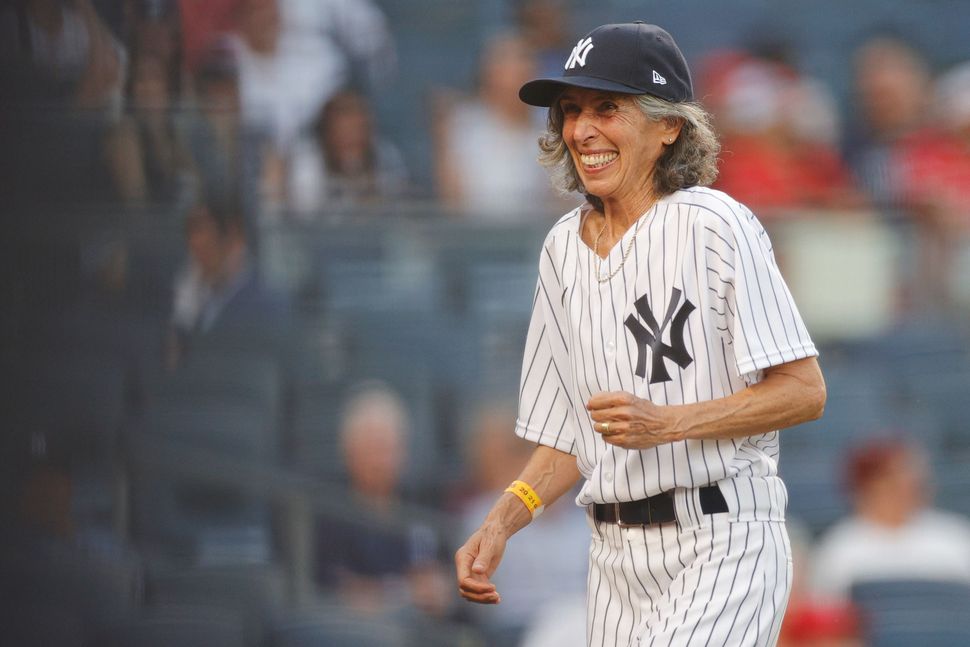 Gwen Goldman smiles in uniform on the field at Yankees Stadium. By Sarah Stier/GETTY

Normally, Passover and baseball’s only crossover occurs when Opening Day falls on the first night’s seder. But when a decades-long dream is fulfilled, it can summon feelings of the Jews leaving Egypt.

“Dayenu!” said Gwen Goldman, 70, of her experience working as the Yankee’s bat girl in their game against the Los Angeles Angels this week.

For Goldman, a native of Connecticut, being a bat girl was a dream that was a long time in the making.

Six decades earlier, she had written to the Yankees about being a bat girl after falling in love with the team and the sport, a game she shared with her father. He took her to games with seats on the first baseline and sent newspaper clippings of the recaps to her while she was away at summer camp.

The rejection letter from then General Manager Ron Hamey, dated June 12, 1961, has been hanging on her bulletin board ever since.

“While we agree with you that girls are certainly as capable as boys, and no doubt would be an attractive addition on the playing field, I am sure you can understand that in a game dominated by men a young lady such as yourself would feel out of place in a dugout,” the letter from Hamey asserted.

Although it wasn’t the response she had hoped for, a note with the Yankees letterhead was still exciting, and Goldman remained a fan.

She never expected the Yankees to reach out after all these years to right their wrong.

Brian Cashman, the Yankees GM since 1998, reached out to Goldman after hearing the story from her daughter. “A woman belongs everywhere a man does, including the dugout,” he read out loud to Goldman from a new letter on a surprise Zoom call with her family.

As part of the Yankees HOPE Week Initiative, Cashman invited Goldman to work as a bat girl for a game. “Some dreams take longer than they should to be realized,” his letter finishes, “but a goal attained should not dim with the passage of time.”

When Goldman arrived at the stadium, there was a uniform for her hanging in a locker with her name on it. With a tear in her eye, she threw the ceremonial first pitch, mentored by pitcher Gerrit Cole. She also hung out with the team in the dugout, stood with them for the National Anthem and walked with third base coach Phil Nevin to take the lineup card to the umpires before the game.

Even though the Yankees lost 5-3, Goldman called the day “a thrill of a lifetime,” in an interview during the fourth inning. “It was so magical: the smells and the sights and the sounds. Hearing that ball be hit, that crack, just unbelievable. It was bigger than life, and there I was with my dad doing this.”