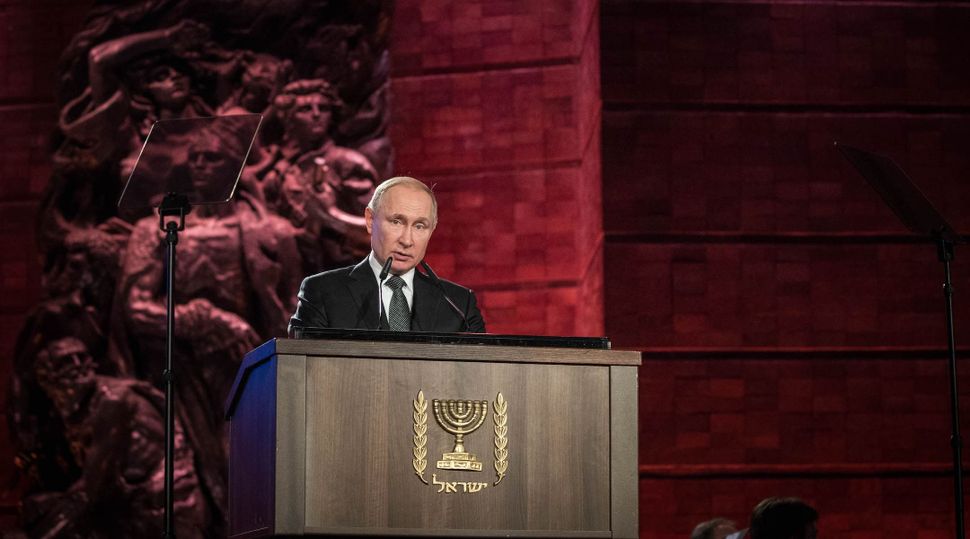 This time he suggested that Israel offered a good model for his designs on Ukraine.

Looking back, at a panel on energy in 2017, the Russian president launched into a 90-second joke about a smartass Israeli soldier who was quizzed by his commander on how to engage multiple enemies. The soldier’s advice: Send more troops.

In 2019, hearing about the financial challenges of a rabbi in Crimea, Putin joked: “So the Jews have problems with finances!” Then he told the rabbi “Todah rabah,” Hebrew for “thank you very much.”

But Putin’s latest take, which he made Tuesday on television, went quite a bit further, affording some rare insight into how he thinks about the Jewish people. Essentially he suggested that Slavic peoples take a cue from Israelis and unite as one people despite different ethnicities, origins and maternal languages.

“Because I do not think that the Ukrainian people are unfriendly people to us,” the Russian leader replied, adding that Ukrainians and Russians “are generally one people.”

Putin went on to offer Israel as a model.

”Look, Jews come to Israel from Africa, from Europe, from other countries of the world. Africans are Black, yeah? People come from Europe — they speak Yiddish, not Hebrew. They seem to be unlike each other, but all the same, the Jewish people value their unity,” he said.

Putin has had strong emotional ties with Russian Jews that have been reflected in a series of favorable policies. Under Putin, authorities have cracked down on antisemitic hate crimes and Jewish communities have received the equivalent of millions of dollars in restitution for properties confiscated by the communists, helping to fuel a cultural and religious revival.

The earliest of those contacts was with a Jewish family who lived on his family’s apartment block in Leningrad, now St. Petersburg. They helped take care of Putin as a boy with his parents working long days.

“They were observant Jews who did not work on Saturdays and the man would study the Bible and Talmud all day long,” Putin wrote in one of his biographies. “Once I even asked him what he was muttering. He explained to me what this book was and I was immediately interested.”

Another influential Jewish figure for Putin was his wrestling coach, Anatoly Rakhlin, who sparked the young Putin’s interest in sports and got him off the rough streets of Leningrad, where Putin would get into fights while his parents worked. At Rakhlin’s funeral in 2013, Putin  reportedly was overcome by emotion and ditched his security detail to take a short, solitary walk.

In 2014, during a visit to Israel, he met his former German teacher, Mina Yuditskaya Berliner, another influential figure in his life because she gave him the language skills that later helped him climb the ranks of the KGB. They had a two-hour chat in her rented apartment; afterward he bought the place for her.

Berliner left Putin the apartment in her will, and it was returned to him after she died in 2018.

Russia’s two main Jewish communal organizations see Putin as a friendly force for Russian Jews. At the same time, tens of thousands of Russian Jews began leaving in recent years as Putin tightened his grip on the Russian media, courts, LGBT people, other minorities and what little remains of freedom of expression.

As for the Israel comparison, Ukrainians tend not to agree that “Ukrainians and Russians are a single people,” as Putin said Tuesday. One pro-democracy Kyiv news site called Putin a “broken record” on the topic.

The post Putin holds up Israel as a model of unity for Ukrainians and Russians appeared first on Jewish Telegraphic Agency.