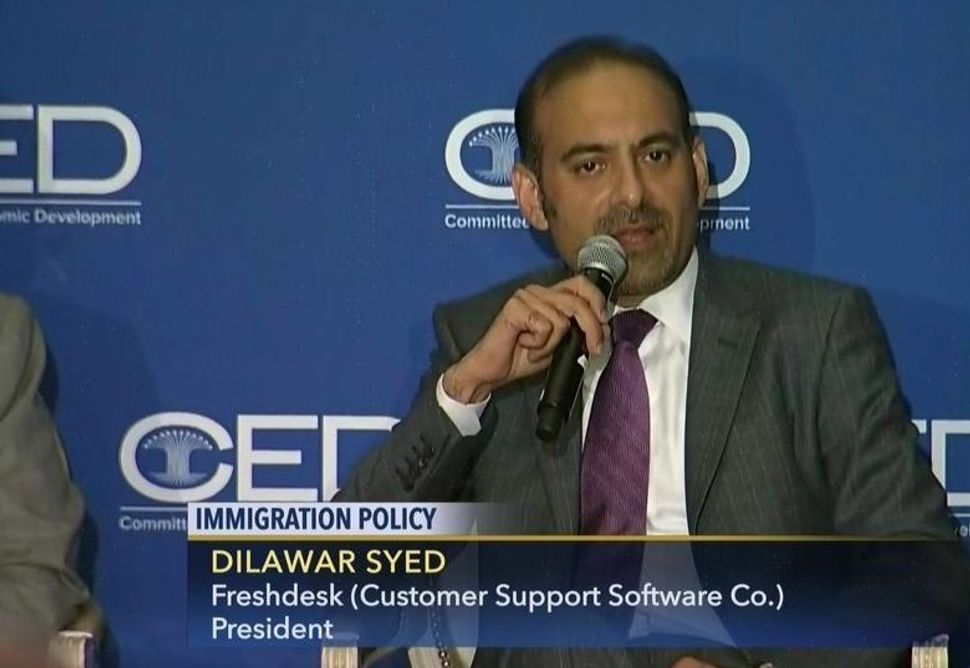 Several mainstream Jewish groups and a prominent pro-Israel Republican are defending a nominee who would be the most senior Muslim American in the administration over the attacks of Republicans trying to sink his chances.

Letters of support from the Jewish groups come ahead of a crucial vote on Tuesday on the nomination of Dilawar Syed to be deputy administrator of the Small Business Administration (SBA).

Republicans on the Senate’s Small Business Committee are opposing Syed over his affiliation with Emgage Action, a Muslim- American advocacy group that has been critical of Israel and opposes legislation that restricts boycotts against Israel and other foreign countries. Syed, the chief executive of a California healthcare technology company, has been an active Emgage board member since 2017.

In a letter addressed to Sen. Ben Cardin of Maryland, the Republicans expressed their concern that Syed’s affiliation with Emgage would impact small businesses with ties to Israeli companies and suggested that his confirmation would “hinder” the close economic cooperation between the U.S. and Israel.

The Republican Jewish Coalition is also publicly opposing the nomination. “Our concerns are based on Mr. Syed’s leadership role with Emgage, an organization that has promoted policies far outside the mainstream regarding Israel and the Palestinians,” Matt Brooks, RJC’s executive director, told the Forward.

Dr. Munr Kazmir, a Pakistani-American Jew who is a member of the RJC’s board of governors, rejected the efforts to derail Syed’s confirmation. “His expertise in the private sector is beyond question and American businesspeople should feel confident that he will be a strong leader on their behalf,” Kazmir said in a joint statement with Jack Rosen, president of the American Jewish Congress. “As American Jews, we understand what it’s like to be a new immigrant from a religious minority community… The struggles for new immigrants from religious minority communities are real and the work to advance is often twice as hard for pioneers like Mr. Syed.”

Kazmir, a major GOP donor, was a former board member of the American Israel Public Affairs Committee (AIPAC), is vice president of AJCongress, and serves on the board of a number of prominent Jewish organizations, including the Anti-Defamation League.

If the evenly split 20-member Senate committee votes along party lines on Tuesday the nomination would proceed to the full Senate without its recommendation. Republicans can introduce procedural hurdles, such as invoking a filibuster, to require an extra floor vote, but Democrats have the simple majority to confirm Syed.

In a rare public statement on a political appointment, the American Jewish Committee also called out the attacks against Syed. “The unsupported accusation that somehow Jewish businesses or those with ties to Israel may not fare as well under Syed’s leadership in the Small Business Administration (SBA) has no factual grounding,” the group said in a statement last week. It noted that Syed has condemned BDS in a questionnaire the group sent him and during his confirmation hearing in April, and that he has traveled to Israel in the past.

The AJC said it “rejects the charge that simply an affiliation with Emgage would reflect negatively on an individual, organization, or agency.”

The Jewish Community Relations Council of St. Louis issued a similar statement in a letter to Sen. Josh Hawley, a Missouri Republican who sits on the Small Business Committee. “Syed has a long relationship with the Jewish community in the United States and has shown himself to be a friend both to our community in this country and in Israel,” the leaders of the group said in a letter on Monday and obtained by the Forward.

RJC’s Brooks, however, said leadership in Emgage should disqualify Syed considering the group’s opposition to the moving of the U.S. Embassy to Jerusalem and the Trump administration’s recognition of the Golan Heights, as well as its support of the right of return for Palestinian refugees, and the group’s backing of congresswomen Rashida Tlaib and Ilhan Omar, who have been criticized for their anti-Israel rhetoric. “These are extreme positions and we do not believe a leader of an organization that promotes such views is suited for a position that requires good judgement,” Brooks said.

The Union for Reform Judaism sent a letter to senatorson Monday, pointing to Syed’s unequivocal condemnation of BDS during his hearing and called the accusations “simply baseless.”

“We urge you to reject any effort to use Mr. Syed’s Muslim faith, association with Emgage, or unjustified accusations of antisemitism as grounds for opposing his nomination,” the largest Jewish movement wrote. “as Jews, we have known the pain of spurious allegations of dual loyalty or being insufficiently ‘American.’ In prior generations, such accusations limited professional achievements for too many American Jews. We are thus deeply pained by and utterly reject any effort to suggest that Mr. Syed’s association with Muslim civic organizations renders him suspect.”