3 Jewish filmmakers were arrested in Nigeria, accused of working with rebels. Their families say they were just donating a Torah scroll. 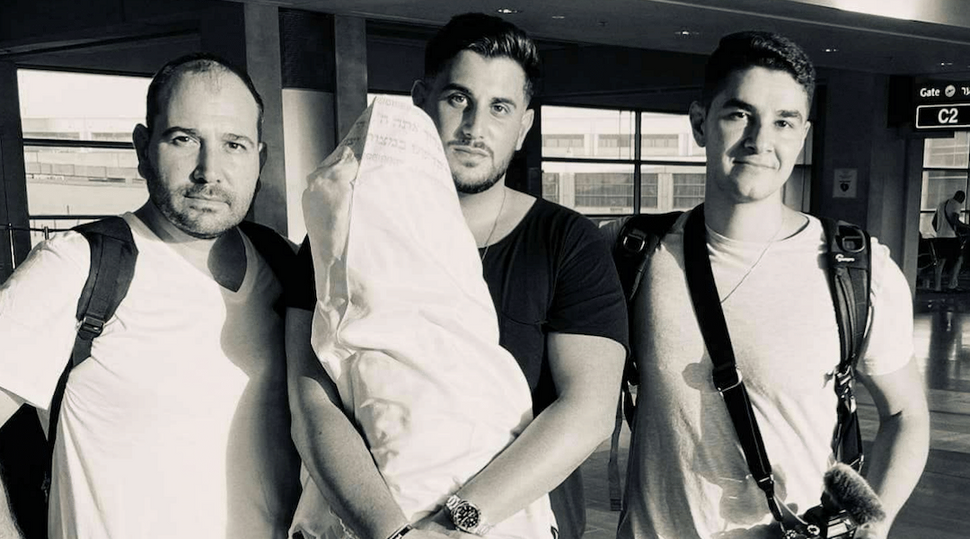 (JTA) — Three Jewish filmmakers working on a documentary about far-flung Jewish communities in Africa have been detained for days by Nigerian authorities and accused of aiding a separatist rebellion led by a Nigerian Jewish activist.

Their families say they were doing nothing of the sort.

They say the men were giving a Torah scroll to a small Jewish community in southern Nigeria — a gift as a token of thanks.

The filmmaking team arrived in the region amid a yearslong independence campaign by the local Igbo people that has embroiled its small Jewish community and led to multiple raids on synagogues. But the filmmakers have said repeatedly that they have no political agenda and only want to film a documentary on the country’s Jews.

Rudy Rochman, Andrew Leibman and Edouard David Benaym were arrested while in synagogue Friday evening in the southern Nigerian Igbo village of Ogidi, according to The Times of Israel. The filmmakers reportedly were taken to the Nigerian capital, Abuja, and are being held there.

Igbo nationalists have been campaigning in recent years to secede from Nigeria and form the independent state of Biafra — a revival of a short-lived state that existed in the region from 1967 to 1970. The leader of the separatists, Nnamdi Kanu, is Jewish, and the region’s small Jewish community has become caught up in the rebellion.

According to a 2019 report on the community in the publication Ozy, Nigerian forces repeatedly raided synagogues in 2018, apparently searching for separatists, and once arrested more than 50 Jews who called for an independent Biafra. In 2018, Kanu fled to Israel to escape government harassment.

Jews praying during one of the synagogue raids told Ozy that police also seized a Torah scroll and a Bible. A Nigerian rabbi told Ozy that his synagogue is pockmarked with bullet holes. Ozy reported that 28 Jews were among 150 separatists killed by Nigerian forces in 2016.

In Nigeria as a whole, Ozy reported that there are 10,000 Jews among a total population of more than 200 million — a number that the publication said had doubled within the previous five years. A 2013 estimate by an earlier documentarian had estimated the number at 3,000.

The filmmakers are in Nigeria to film “We Were Never Lost,” a documentary series about the mostly little-known African Jewish communities in Nigeria, Zimbabwe, Uganda and Ethiopia. Rochman, 27, the documentary’s host, is an Israel activist who was a leader of the organization Students Supporting Israel while in college at Columbia University.

Many of the Igbo Jews in Nigeria believe they are descended from Judaism’s ancient Ten Lost Tribes. The Igbo people, who number more than 20 million in total, have maintained customs similar to Jewish rituals — among them  circumcising their sons, refraining from eating foods such as pork, mourning their dead for seven days, celebrating the new moon and marrying under a canopy.

Some wonder if the word Igbo, which is sometimes spelled Ibo and pronounced “EE-bo,” stems from the word “Hebrew.” But the Igbo have not been broadly recognized as Jewish for the purposes of immigrating to Israel as have Ethiopian Jews, more than 100,000 of whom were airlifted to Israel in the 1980s, 1990s and afterward.

The filmmakers arrived in Nigeria on July 6, according to their Instagram feed, and traveled to Ogidi with the Torah scroll as a gesture of thanks. But a statement from the families of the detained crew said separatist activists have taken images of the filmmakers giving the Torah and appropriated them to support Biafran independence.

“Unfortunately, members of non-state political groups have hijacked for their own purposes images of the filmmakers gifting a Torah to a local community,” the statement said. “These individuals are distorting the intentions of the filmmakers in an effort to manufacture a connection to local political matters when no such connection exists.”

In a statement posted Wednesday to Instagram, the documentary’s producer, Jonny Pottins, said the documentary is not meant to interfere in Nigerian politics.

“We Were Never Lost is apolitical, it has nothing to do with the internal political affairs of any of the nations that we’re visiting, and its only goal is to document the lives, customs and experiences of Jewish communities in these countries,” Pottins said.

The crew posted a similar statement to the documentary’s Facebook page on July 8. Several people commented on the post with messages supporting an independent Biafra.

“The most striking lesson to take home is that the aspiration of every Igbo Jew is to have a Judeo-Christian nation called Biafra,” one commenter with the name Biafra Boy wrote. “If at all, the Igbo Jews need any resources, it is that you help in any way your capacity can to achieve the Igbo Jews survival and the survival of the race, through the establishment of Biafra nation.”

According to the families’ statement, the U.S., French and Israeli embassies in Nigeria are working to get the filmmakers released. The statement said that the embassies’ intervention has persuaded Nigeria’s Department of State Services, which detained the filmmakers, to allow the local Chabad to deliver kosher meals to them.

“We hope that the DSS will quickly conclude what the facts support – that the filmmaking team has no political motives and that the team should be released from custody as soon as possible,” the families’ statement said.

This is not the first time that Israelis traveling in Africa have spent time in prison under dubious circumstances. In 2010, the Tunisia-born Israeli artist Rafram Chaddad was arrested in Libya, where he said he had traveled to photograph abandoned synagogues and Jewish cemeteries. He spent nearly six months in prison on suspicion of being a spy.

The next year Ilan Grapel, an Israeli-American law student, was arrested in Egypt for espionage a few months after the ouster of longtime dictatorial President Hosni Mubarak. He was released to Israel in a prisoner exchange four months later.

On Thursday, Pottins projected optimism in an Instagram video message.

“There’s processes underway right now, and we’re hoping for some good news,” he said. “Keep the team in your thoughts and prayers.”

—
The post 3 Jewish filmmakers were arrested in Nigeria, accused of working with rebels. Their families say they were just donating a Torah scroll. appeared first on Jewish Telegraphic Agency.

3 Jewish filmmakers were arrested in Nigeria, accused of working with rebels. Their families say they were just donating a Torah scroll.