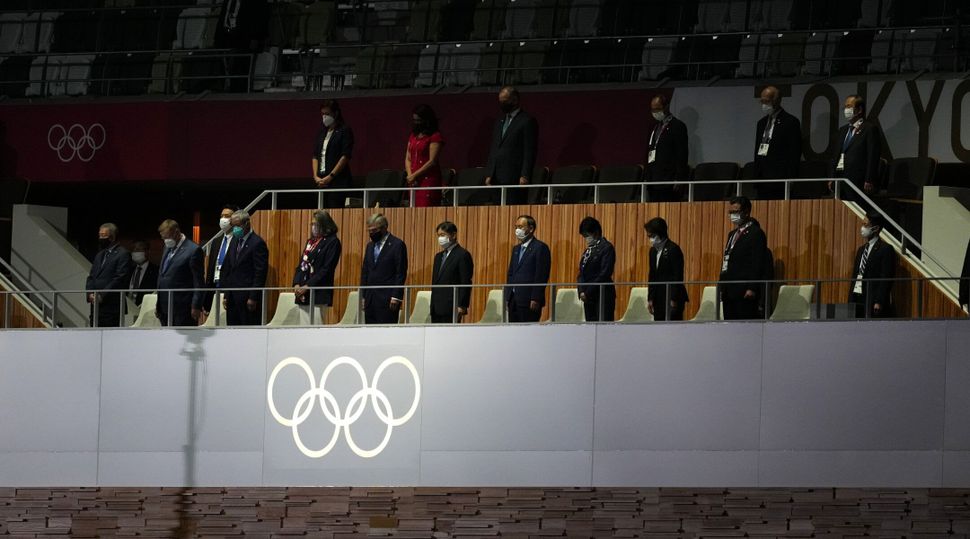 The emperor of Japan, International Olympic Committee president Thomas Bach and others stand for a moment of silence during the opening ceremony of the Tokyo 2020 Olympic Games. (Martin Rickett/PA Images via Getty Images)

(JTA) — For the first time ever, the Olympic Games held a moment of silence during the opening ceremony for the 11 Israeli athletes murdered during the Munich Olympics in 1972.

There, the Palestinian terrorist group Black September attacked members of the Israeli Olympic team, ultimately killing six coaches and five athletes, as well as a West German police officer who participated in an unsuccessful raid to free the hostage athletes.

Ankie Spitzer and Ilana Romano, widows of two of the murdered athletes, have long advocated for the International Olympic Committee to acknowledge the massacre in the opening or closing ceremony. But the IOC has never before heeded the call, at times suggesting that honoring the Israeli athletes could be divisive.

“We must consider what this could do to other members of the delegations that are hostile to Israel,” an Israeli committee member told the BBC in 2004, when a small memorial was held at the Israeli ambassador’s house in Athens before the Olympics there.

In 2012, ahead of the London Olympics, the IOC rejected an international campaign for a moment of silence. “The opening ceremony is an atmosphere that isn’t fit to remember such tragic events,” Jacques Rogge, then the leader of the IOC, said at the time.

Ahead of the 2016 Rio Olympics, the first official Olympic ceremony was held to honor the victims — but not during the opening ceremony; instead, it was held two days before.

Now, a year away from the 50th anniversary of the terror attack, the Olympics held a moment of silence. The event, which had not been previously announced, came a day after the opening ceremony’s creative director, a Japanese actor and comedian, was fired over a Holocaust joke he made in the 1990s.

Footage from the first ever moment of silence for the victims of the 1972 Munich massacre of Israeli athletes. May their memories be blessed.