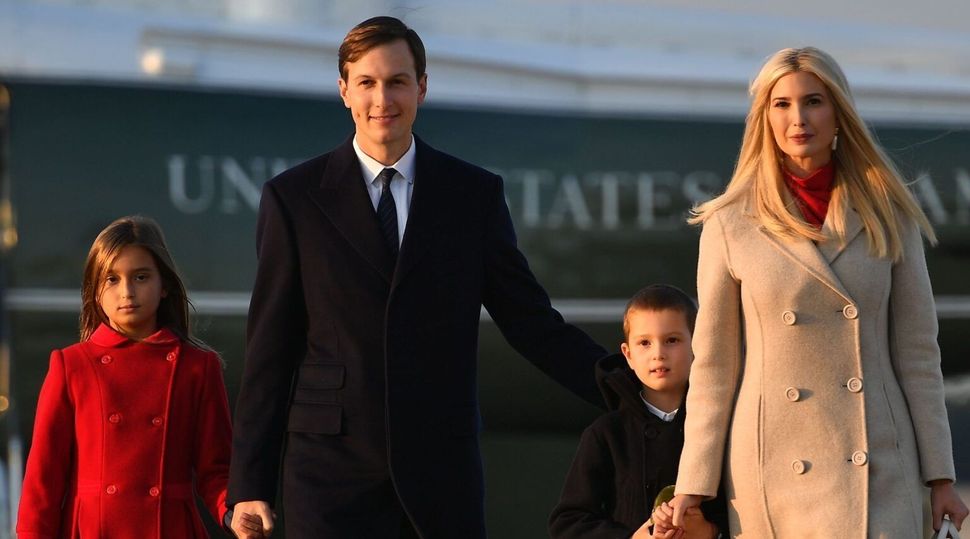 Jared Kushner and Ivanka Trump spotted with their children Arabella and Joseph at Joint Base Andrews in Maryland, Sept. 22, 2020. By MANDEL NGAN/AFP via Getty Images

(JTA) — Jared Kushner, former President Donald Trump’s son-in-law and onetime senior adviser, is quitting politics to focus on investment, particularly on businesses that advance Israeli-Arab peace, according to a report.

Kushner’s business will be called Infinity Partners and will be based in Miami, where Kushner and his wife Ivanka now live, Reuters reported, quoting anonymous sources. The couple are about an hour’s drive from Trump’s Palm Beach home.

Kushner will also open an office in Israel that will promote business ties between Israel, India, Persian Gulf states and North Africa.

One of Kushner’s last acts as an adviser to Trump was leading the brokering of normalization deals between Israel and the United Arab Emirates, Bahrain, Sudan and Morocco.

Much of Kushner’s emphasis while shaping his father-in-law’s Middle East policy was on peace nurtured through investment and economic development. It was a winning formula with what he dubbed the “Abraham Accords,” but failed to bring about a breakthrough in Israeli-Palestinian peace.

Kushner also took a leading role in running Trump’s campaigns in 2016 and 2020, but has signaled that he is not going to be involved in a possible Trump campaign in 2024.

Kushner is a third generation principal in a family real estate empire founded by his grandfather, a Holocaust survivor. The company has done extensive business in Israel.