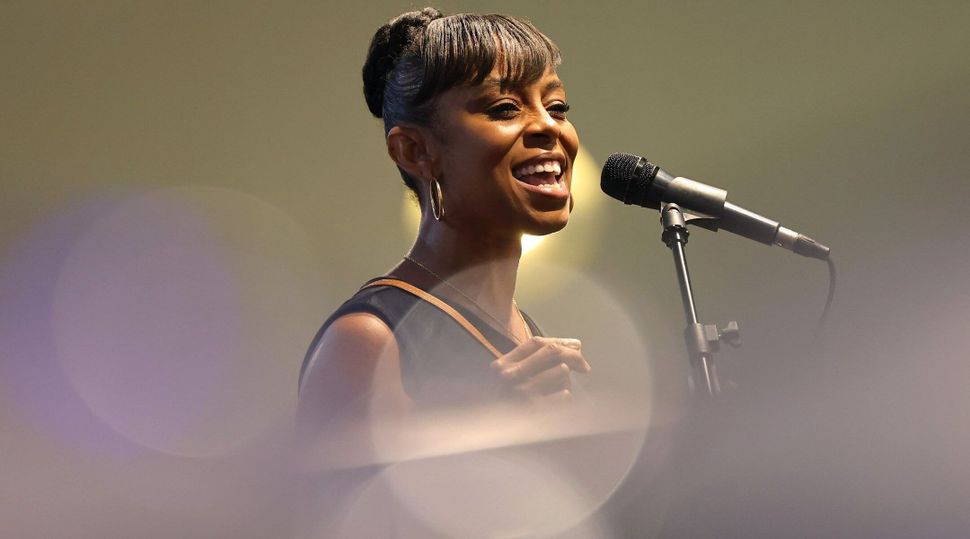 Cuyahoga Councilwoman and congressional candidate Shontel Brown speaks during a Souls to the Polls rally at Sanctuary Baptist Church in Cleveland, Ohio, Aug. 1, 2021. Courtesy of Getty

(JTA) — Shontel Brown, a Cuyahoga County councilwoman, came from behind in the polls to win a critical Democratic primary in a Cleveland area district with a substantial Jewish population, with considerable help from a mainstream pro-Israel political action committee.

Dave Wasserman, the political editor of the Cook Political Report, on Tuesday evening called the election in Ohio’s 11th District for Brown, who was facing Nina Turner, a former state senator who co-chaired the 2020 presidential run of Vermont Sen. Bernie Sanders, the flag-bearer for the party’s left.

Turner was well known in the district and had a national profile as a leading progressive spokeswoman and thinker. Early polls showed her with a substantial lead, and she was a prodigious fund-raiser, garnering close to $6 million to Brown’s $2.5 million. Sanders campaigned for her in the district, and she had the backing of the “Squad,” the grouping of six progressive lawmakers led by Rep. Alexandria Ocasio-Cortez, D-N.Y.

Brown, who is also chairwoman of the county’s Democratic Party, was favored by the party’s centrists, and notably had the backing of Rep. James Clyburn, D-S.C., the African American kingmaker whose support for Joe Biden during last year’s presidential primaries was seen as pivotal in gaining Biden the party nomination and then the presidential election.

The political action committee affiliated with the Democratic Majority for Israel, a mainstream pro-Israel group, backed Brown from the outset, in part because she had established ties with the substantial Jewish community in the district — Brown has visited Israel — but also because Turner was associated with the Israel-critical wing of the party. There are over 20,000 Jews in the 11th.

Turner would not commit to a position on the boycott Israel movement, which at least three members of the Squad have endorsed. DMFI pumped $2 million into the race, running ads that highlighted Turner’s past attacks on Democratic Party centrists, focusing especially on her disdain for Biden, who is popular among Democrats. Also endorsing Brown was the Jewish Democratic Council of America and the nonpartisan PAC, Pro-Israel America.

The election was held because the incumbent, longtime congresswoman Marcia Fudge — who was also close to the Cleveland Jewish community — became Biden’s Secretary of Housing. As a Cabinet official, Fudge could not endorse a candidate, but her mother campaigned for Brown. Brown is almost certain to win the November special election in this heavily Democratic district.

Both progressives and centrists in the Democratic Party saw the race as pivotal. Progressives were seeking a win to shore up their strength in a party in which they at times feel marginalized as Biden cultivates Republicans to shepherded through key bipartisan legislation. Progressives recently lost to a centrist a race for the Democratic nomination for mayor in New York, another race that at first seemed to be a progressive lock.

Democratic centrists meanwhile fear that progressives are alienating independents ahead of the 2022 midterms, and could threaten the tiny majorities the party is maintaining in both chambers of Congress.