Artem Dolgopyat won a gold medal for Israel in Tokyo, but he can’t get married at home. His story reignites an old debate. 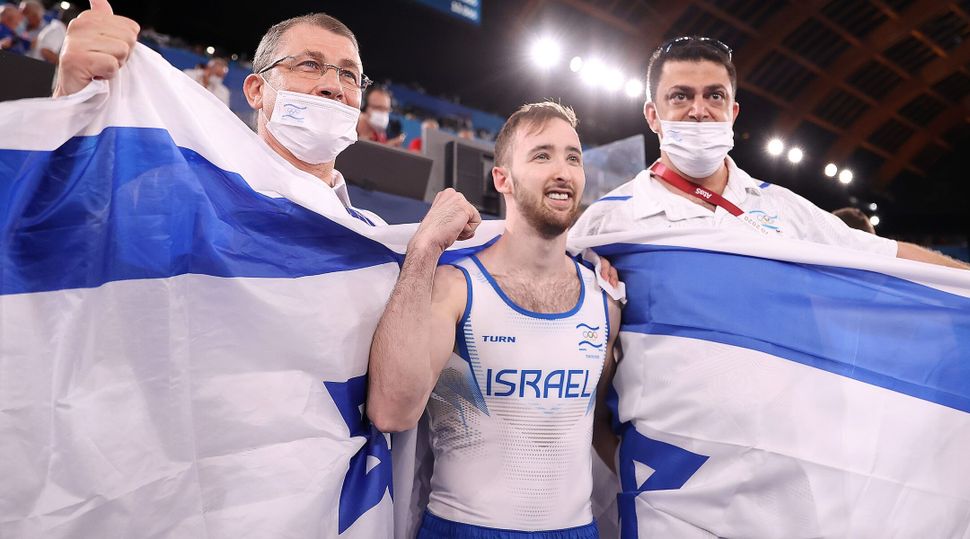 (JTA) — Israeli gymnast Artem Dolgopyat is not only making headlines around the world for winning a gold medal at the Tokyo Olympics.

Dolgopyat, 24, who immigrated from Ukraine at age 12, is engaged but not allowed to be married in Israel because he is not Jewish according to traditional Jewish law. Only his father’s side of the family is Jewish.

His case has added fresh fuel to the fire in the ongoing battles over religious policy in the Jewish state, as well as the situation of the many Israelis like Dolgopyat. The Associated Press, The Washington Post and other outlets have highlighted how the story has struck a chord throughout Israel, and quoted Dolgopyat’s angry parents. His fiance flashed her ring on Israeli TV.

“They need to go abroad [to marry], but they don’t let him go abroad because he always needs to do sports,” his mother has said.

Israel offers automatic citizenship to anyone with one Jewish grandparent, but Israel’s Chief Rabbinate says only those with a Jewish mother are Jewish. The Chief Rabbinate also controls marriage registration for Jews in Israel and recognizes only Orthodox Jewish marriage. Israel does not offer civil marriage and technically prohibits Jewish weddings conducted outside of the Chief Rabbinate’s auspices.

In practice, that means hundreds of thousands of Israelis with non-Jewish mothers, many of them from the former Soviet Union, cannot marry in Israel. Israelis considered non-Jewish by the Chief Rabbinate can be married abroad and have that marriage recognized by Israel.

Dolgopyat’s case, however, has brought the issue of marriage restrictions to the fore in Israel, where most of the population supports instituting civil marriage. Israel’s recently formed government is pursuing a slate of reforms to religious policy, though civil marriage does not appear to be on the table.

Tourism Minister Yoel Razvozov, who is also an immigrant from the former Soviet Union and once competed for Israel in the Olympics as a judoka, cited Dolgopyat’s case as an argument for letting all Israelis marry in the country.

“It doesn’t make sense that the Rabbinate of the country that Artem Dolgopyat respectfully represented today doesn’t allow him basic civil rights such as marriage in Israel,” Razvozov tweeted on Aug. 1. “Israeli citizens, no matter where they were born, do not need to go through a tiring and demeaning process and get approval or denial from the Rabbinate to marry.”

—
The post Artem Dolgopyat won a gold medal for Israel in Tokyo, but he can’t get married at home. His story reignites an old debate. appeared first on Jewish Telegraphic Agency.

Artem Dolgopyat won a gold medal for Israel in Tokyo, but he can’t get married at home. His story reignites an old debate.