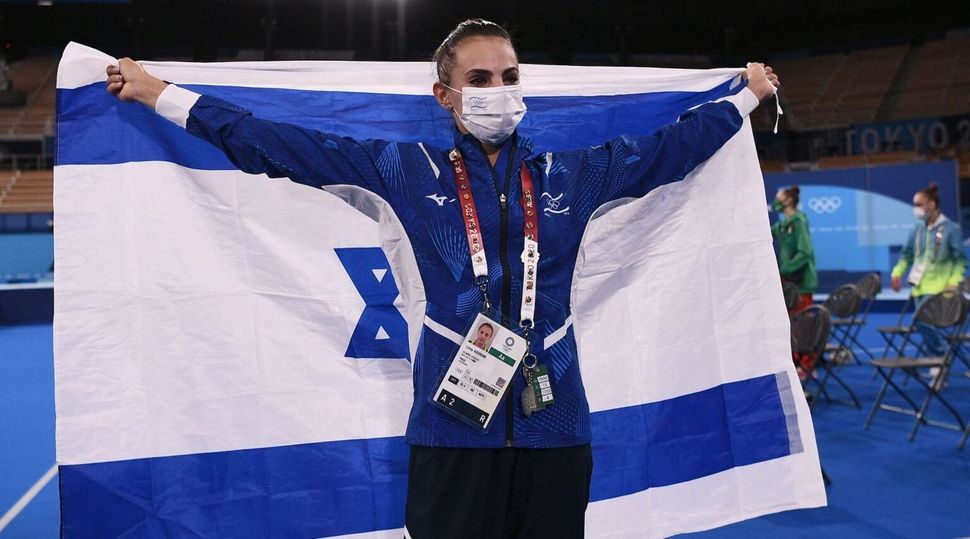 (JTA) — Linoy Ashram won the gold medal in the rhythmic gymnastics contest at the Tokyo Olympics Saturday, narrowly beating out her Russian competitor to become the first Israeli woman to win an Olympic gold medal. The medal was Israel’s second gold at the Tokyo games and third in any Olympic contest.

Ashram’s winning score, just .15 of a point over that of her Russian competitor, Dina Averina, prompted an appeal and cries of “injustice” in a tweet from the Russian Olympic Committee. Ashram’s victory broke Russia’s two-decade Olympic gold-medal streak in the individual rhythmic gymnastics contest.

“I can’t spot any obvious mistake that I did,” Averina said of her routine. “I was pretty consistent and clean compared to Linoy who lost the apparatus.”

The Russian team appealed the scoring in the contest, which consists of gymnastic routines using props including balls, ribbons, and hoops. The appeals, which failed to overturn the result, included the ribbon routine in which Ashram dropped her ribbon but still finished with the winning score.

“It’s what I dreamed of for all my life,” Ashram said of her win. “It’s an amazing feeling to stand in this place, at this time, on the podium and in first place.”

The Israel Defense Forces, in which Ashram served, celebrated her win with a tweet that, in keeping with the army’s rules, referred to the gymnast by her rank and first name only.

“And I hope to compete in the Olympics…” said gold medalist Cpl. Linoy 3 years ago, then a soldier in the C4I and Cyber Defense Directorate.