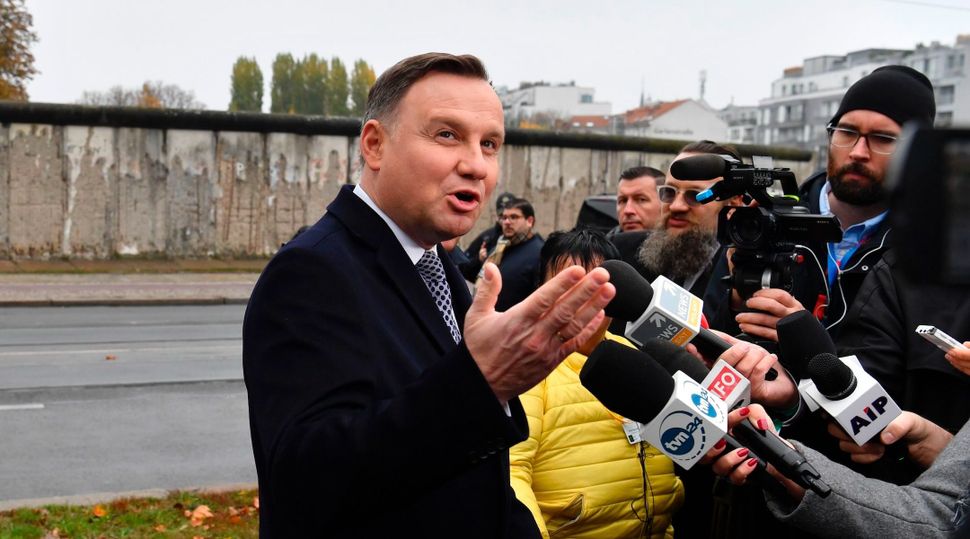 President Andrzej Duda of Poland speaks to the media in front of remains of the Berlin Wall, Nov. 9, 2019. By John Macdougall/AFP via Getty Images

(JTA) — Poland’s president signed into law a bill that will restrict Holocaust restitution claims by Jews and others who had property stolen by the Nazis or Soviet-backed occupation forces during the World War II era.

The law, signed Saturday by President Andrzej Duda, gives all property restitution claims a 30-year time limit from the alleged theft. That will effectively wipe out any claims from the World War II era.

Israel’s top two leaders called the law antisemitic and the country recalled its ambassador to Warsaw. U.S. Secretary of State Tony Blinken, who is Jewish, voiced considerable concern prior to Duda’s signing, and international Holocaust restitution organizations also fumed after its passage.

“Poland today approved – not for the first time – an immoral, anti-Semitic law,” Israeli Foreign Minister Yair Lapid said in a statement Saturday. Prime Minister Naftali Bennett called it “a shameful decision and disgraceful contempt for the memory of the Holocaust.”

Duda and other Polish leaders claim the law will simplify the country’s property laws and end a period of corruption and confusion over restitution claims. The majority of those claims have actually been made by non-Jewish Poles.

But the move is a clear continuation of the country’s right-wing government’s longstanding crusade to separate itself from the effects of Nazi war crimes. In 2018, Poland triggered a similar amount of ire over a law that made it illegal to blame Poland for any Holocaust atrocities, despite the fact that many Poles collaborated with the Nazis.

The World Jewish Restitution Organization (WJRO) told Reuters that it hopes Poland will still resolve from the “Communist era,” during which Communist forces retained stolen Jewish property first taken by the Nazis. Poland has given back millions in compensation for property that was owned by Jewish communities, but it is the only major country in the former Soviet bloc that has taken no action to return private property, according to the WJRO.

Lapid added that Poland’s ambassador to Israel, who is out of the country on vacation, should not return, and said that Israel is coordinating with the U.S. on further steps to condemn the law.